Which Orlando Airport is Best: MCO or SFB?

When searching for cheap flights to Disney World, most travelers will find flights arriving and departing out of the main Orlando International Airport (MCO). But don’t overlook Orlando-Sanford Airport (SFB) for some cheap low-cost alternatives.

A Guide to Orlando Airports

To familiarize yourself with the area and how you can potentially save by choosing a different airport, check out the following airline routes and ground transportation options at both Orlando airports. Orlando International Airport (MCO) is one of the busiest airports in the nation, handling nearly 50 million passengers each year. It’s centrally located about 10 miles southeast of downtown and around 17 miles east of Walt Disney World. For most travelers, flying into MCO will be the best (or only) option since the other airport in Sanford has limited service from only a few airlines.

Several airlines focus on nonstop service to and from Orlando (MCO) with Southwest taking the majority of the market share. Budget carriers Frontier and Spirit keep flight prices very low by offering nonstop service to and from many cities around the U.S. — even small markets like Green Bay and Greensboro. JetBlue and Silver Airways also have hubs in Orlando even though Delta and American actually fly more passengers by connecting travelers through other hub cities.

International service from Orlando is heavily focused on Canada, Latin America, and the Caribbean, but there are also a few nonstop options to Europe and the Middle East. Budget carriers flying across the Atlantic include Norwegian and Eurowings. For flights to South America, Azul and GOL are great options for a cheap flight to Brazil. And if you’re looking for a nonstop flight to London, keep in mind that British Airways flies to London’s Gatwick Airport (LGW) from Orlando rather than the more popular Heathrow.

The airport has two terminals, each with two separate airside concourses. People mover tramways connect passengers from the check-in/baggage claim area with the gates. Orlando International Airport (MCO) is the closest airport to Disney or for a quick trip along the Beachline Expressway to Cocoa Beach and Cape Canaveral.

Orlando MCO is a hub for which airlines?

How much does it cost to get from MCO to downtown Orlando or Disney World?

If you’re staying directly on Disney property, you’ll have a free shuttle to/from the airport provided by the Disney resort. For other hotels in the area or to surrounding cities in the Greater Orlando area, there are several shuttle companies offering service to/from Orlando International Airport.

The cheapest way to get to/from the airport is by taking a local bus. Of course, this will also be the least comfortable and take the most time. Look for the local bus stop located on the A-side of the terminal on the Ground Transportation Level 1. Local buses will stop in bays A38-A41. To get downtown, hop on either bus 11 or 51, which both reach downtown in a little less than one hour and cost just $2 per person. Bus 11 is more frequent with service every 30 minutes between 4am and 7pm Mon-Sat, and every hour after 7pm or on Sundays. The final bus from the airport leaves at 11:28pm during the week with service ending earlier on weekends. Bus 51 runs once per hour from 5:30am until 10:20pm, except Sundays when service ends at 8:21pm.

To reach Disney by local bus, the most direct way is to take bus 111 westbound to Sea Harbor Drive and transfer to bus 50 towards the Walt Disney World Transportation and Ticket Center. Bus 111 runs every 30-60 minutes from the airport between 5:30am and 10:30pm, daily.

An Uber or Lyft is a great way to get an affordable ride to or from Orlando airport. Rideshare services pick up passengers on the Arrivals curb (level 2) and cost slightly less than a normal taxi rate. It will cost around $34 to downtown Orlando or $38 to the Disney area. 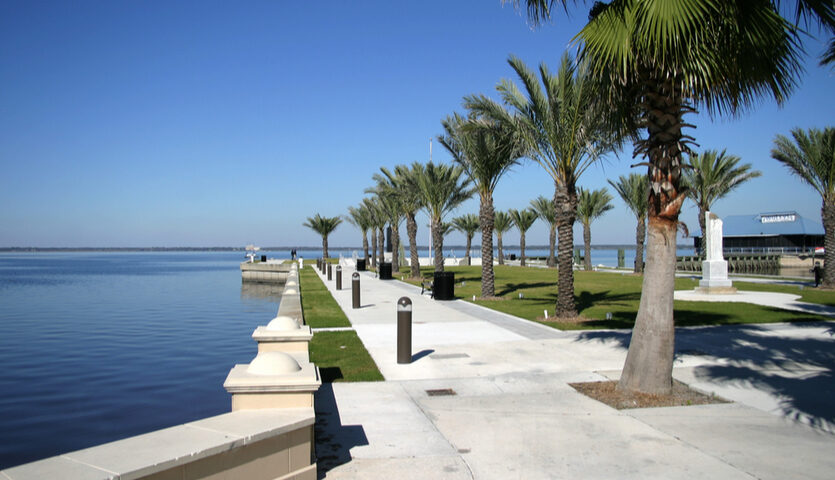 Often overlooked, Orlando-Sanford International Airport (SFB) is dominated by budget carrier Allegiant Airlines. The airline focuses on flying passengers nonstop from smaller markets around the U.S. to leisure travel destinations such as Orlando. By using Sanford airport, located approximately 30 miles north of Orlando, Allegiant is able to acquire more slots and offer nonstop flights to more destinations around the country that don’t have any nonstop options to the larger airport closer to town.

It should be noted that most of Allegiant’s flights do not operate daily so travelers will have to be more flexible with travel dates than usual in order to take advantage of Allegiant’s super-low fares. Other than Allegiant, the only other airline currently offering service from Orlando-Sanford Airport (SFB) is TUI Airways. It flies seasonal routes on a limited basis to certain cities in the U.K. In the past, there have been other international carriers that have come and gone with flights to/from Sanford Airport, but most have since moved operations to Orlando International (MCO) or have ended service to the area completely.

Orlando-Sanford Airport is a nice option for those who want to fly nonstop from smaller cities around the U.S. and who want to take advantage of a low fare on Allegiant. Its location means it is quite a bit further from Disney than Orlando’s main airport, but if you’re looking to rent a car, you’ll find shorter lines in Sanford and the actual time from touchdown to your hotel may not be much of a difference. This airport is also a great option if you’re looking for a cheap way to get to Daytona Beach as it’s only 45 miles away.

Make sure to compare the cost of transportation between Orlando Sanford Airport (SFB) and your accommodations in the Orlando area. The flight savings may disappear due to higher ground transportation costs if you do not plan on renting a car. There aren’t any public transit options available from Sanford Airport, so plan accordingly.

Orlando SFB is a hub for which airlines?

How much does it cost to get from SFB to downtown Orlando or Disney World?

There aren’t any local busses at Sanford Airport, but Universal Orlando Resort has an Attraction Express Bus that offers direct service between the airport and Universal starting at just $10 each way, per passenger. When I attempted to purchase a ticket online, it didn’t seem to be necessary to hold a reservation at one of Universal’s resorts so this could be the most affordable way to get between the Disney resort area and Sanford Airport even if you don’t plan to stay at Universal.

An Uber or Lyft should cost around $35 to downtown Orlando or $50 to Disney and either can be picked up in designated zones across from the Terminal B baggage claim. Taxi service is quite a bit more expensive with Mears transportation quoting $150 to the Disney area or $100 to downtown.

Alternatively, contact one of several other transportation companies providing service in the Greater Orlando area and you’ll possibly be able to find a better rate than a typical taxi service.