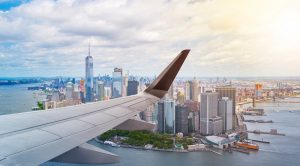 JFK vs LaGuardia vs Newark: Which NYC Airport Should You Pick?

It’s the greatest city in the world! The city so nice, they named it twice! If you can make it there, supposedly, you can make it anywhere. Some have even gone so far as to claim that the streets will make you feel brand new, the big lights will inspire you. Gosh, popular culture sure loves to hang its impossibly high expectations on New York, but, for the most part, the city does a fair job of meeting them.

That’s despite a rapidly deteriorating subway system and the fact that there are more TD Ameritrade branches than public toilets. Maybe even more than actual residents.

But if it’s first impressions that matter most, then anyone making their New York debut should prepare to be underwhelmed, at least by the city’s airports. Not only are they noticeably outdated when compared to other global hubs, they all consistently rank among the worst in the U.S. for flight delays.

Of course, there are certain advantages in choosing one over another, and that really depends on where in New York you plan to hang your hat, how much time and money you’re willing to spend, and, probably, your general mood upon arrival. The Jan Brady of New York City airports, LaGuardia is often passed over in favor of its siblings, both of whom are accessible by rail. Technically closer to Manhattan, but not as straightforward for passengers hoping to rely on public transportation. Also? LaGuardia takes a lot of heat for being cramped and archaic, most famously criticized by Joe Biden for seeming Third World. He’s not wrong. But after decades of neglect, LaGuardia is finally receiving that much needed facelift by way of major renovations. In Terminal B, 11 of 18 new gates opened last December 1. Construction will continue through 2020 and LaGuardia will hopefully emerge looking less like a Greyhound station.

LaGuardia is a hub for which airlines?

How much does it cost to get from LaGuardia to Manhattan?

With ongoing construction in and around the airport, no ride to LaGuardia will be a breezy one. A ride-hailing app along the lines of Lyft or Uber is probably the least tedious means of transportation, especially if you’re traveling with large bags.

The LaGuardia AirTrain is currently in the works, which will finally connect LGA to the Long Island Rail Road via Mets-Willets Point Station, though don’t expect to see that completed anytime soon. For now, anyone hoping to make use of the MTA can catch the M60 bus line, leaving from outside Terminals A, B, C, and D, with stops in Astoria, along 125th St in Harlem where it syncs up with the Metro-North Railroad, down Amsterdam Ave., and at 116th St. & Broadway. Early birds with sunrise flights should look elsewhere, as the M60 is out of service between 12am and 6am. It’s hard to beat the bus at just $2.75, which would include a subway transfer, but get comfy because it’s a long ride.

From LGA, the price of Uber and Lyft will vary, with Uber estimating a fare of around $44 to the Lower East Side via UberX, while Lyft puts the same ride around $35 to $42.

Instead of a flat rate, taxi fares from LGA are metered. Expect to pay around $40 for a ride to the Lower East Side, tip not included.

NYC Express Bus shuttle service to Manhattan is also available for $16 one way or $30 round-trip, with stops at Grand Central, Port Authority, and Times Square.

Driving? LaGuardia has its very own ZIP code located in Queens, NY 11371. 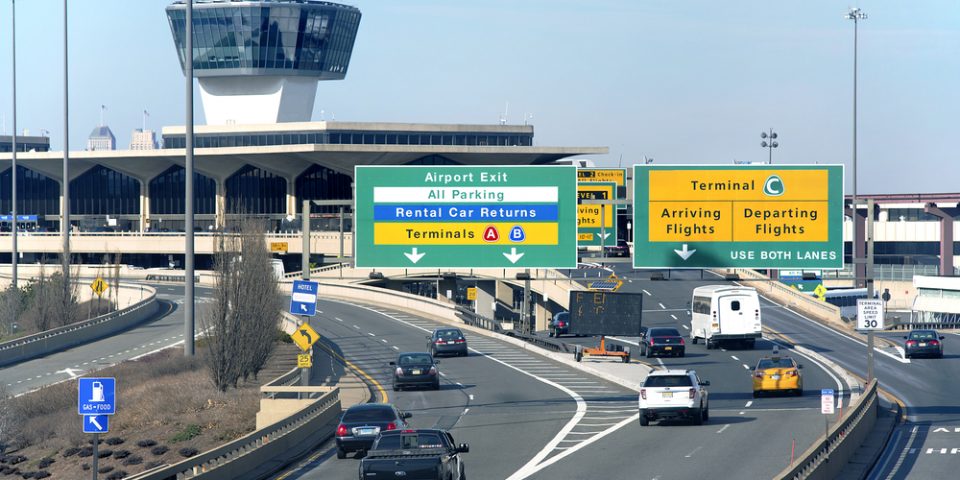 New Yorkers have some very strong opinions when it comes to Newark Airport, and most of them have little to do with the actual airport facilities and more with its Jersey address.

If you’re headed into Manhattan, particularly anywhere on the west side, Newark is just another hop across a river (13 miles to be exact), and a relatively easy one if you know what you’re doing.

For first timers, the ride between Newark to Manhattan certainly gives a bleak introduction to the city, winding through an industrial hellscape of toxic bogs and rusty warehouses. New visitors may wonder what exactly they’ve gotten themselves into.

Newark is a hub for which airlines?

How much does it cost to get from Newark Liberty to Manhattan?

Cab rides from Newark aren’t as expensive as they once were, but please don’t mistake that for an endorsement. They can still be pretty costly at around $50 to $70. And, worse, there are tolls to pay, and those aren’t included in the fare. For the pleasure of passing through the Holland Tunnel, you’ll pay $10.50 off-peak, or $12.50 during peak times. If the taxi driver has to help load your suitcase and it happens to exceed 24 inches, that’ll cost extra, too.

Lyft estimates a fare between $45 and $50 to the Lower East Side. Uber puts that figure closer to $60. Depending on the time of day, you also run the risk of getting snagged in traffic. We’re not talking normal traffic here. This is tunnel traffic, thick and brutal. Not an ideal way to begin your visit.

There is a pretty decent rail service via the AirTrain to Newark Liberty Airport Station, transferring to NJ Transit (or even Amtrak, though it’ll cost a little more) at Newark’s Penn Station onward to Manhattan’s Penn Station. Trains run daily but not between the hours of 2:00am and 5:00am. The trip takes about 25 minutes and will set you back a whole $13.

Passengers who don’t feel up to the challenge of navigating a strange new public transport network but are equally reluctant to drop $60 on a car ride should consider coach service. A seat on the Newark Airport Express goes for $17 one-way or $30 round-trip, and is miraculously speedy, departing every 15 minutes. From Newark, service runs from 4:15am to 1:00am with stops at Grand Central, Port Authority, or directly across from the New York Public Library Main Branch at Bryant Park. 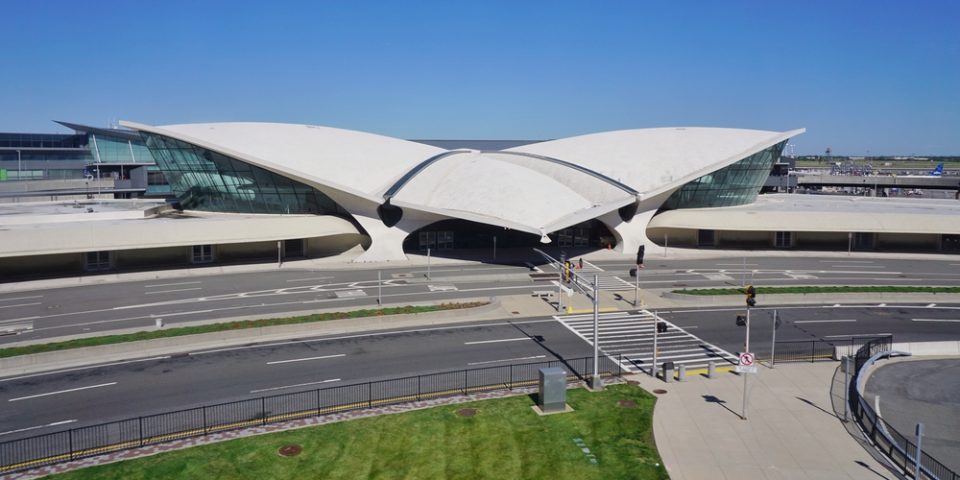 Of New York’s three major airports, Kennedy is as good as it gets. The Mariah Carey to LaGuardia’s Yodel Boy. The Nobu to Newark’s Arby’s. But is JFK a world-class airport? No, not really. It’s still a little bit of mess, just less so than the other local airports. JetBlue’s Terminal 5, opened in 2008, and serves as one of few bright spots, airy and modern with a decent range of places to grab a meal. And the soon-to-open TWA Hotel in the adjacent Eero Saarinen designed Flight Center will add a little extra cool to the place.

But bigger changes are on the horizon, namely a $13 billion overhaul which will create two new terminals, complete with a scaled down version of the High Line, at least according to recently released mockups.

For now, JFK stands out from other local airports for being so easy to reach for most New Yorkers, with access to both the Long Island Railroad and the subway. It also happens to be the busiest airport for international travel to/from North America, with over ninety airlines offering service to anywhere you could ever think of running off to. If you’re arriving internationally, odds are you’ll touch down at JFK.

JFK is a hub for which airlines?

How much does it cost to get from JFK to Manhattan?

The AirTrain links JFK with Howard Beach Station where passengers can catch the A train, or to Sutphin Boulevard Station to the E, J, and Z trains. Service to Manhattan takes about an hour. Connections are also available to the Long Island Railroad at Jamaica Station directly from JFK. If traveling to Midtown Manhattan, you’ll find that taking the Long Island Rail Road is much quicker.

The AirTrain fare is $5, tacked on to the price of the MetroCard you must buy in order to exit the turnstiles at the station. A subway ride is $2.75, though that may be going up again soon.

Lyft estimates rides from JFK to the Lower East Side at $45 - $50. Meanwhile, Uber’s fare estimate guide shows the same trip at $52.45. For taxis, the official flat rate from JFK to Manhattan is $52.

NYC Express Bus shuttle service to Manhattan is also available for $16 one way or $30 round-trip, with stops at Grand Central, Port Authority, and Times Square.

Prefer to drive? JFK has its own ZIP code located in Queens, NY 11430. 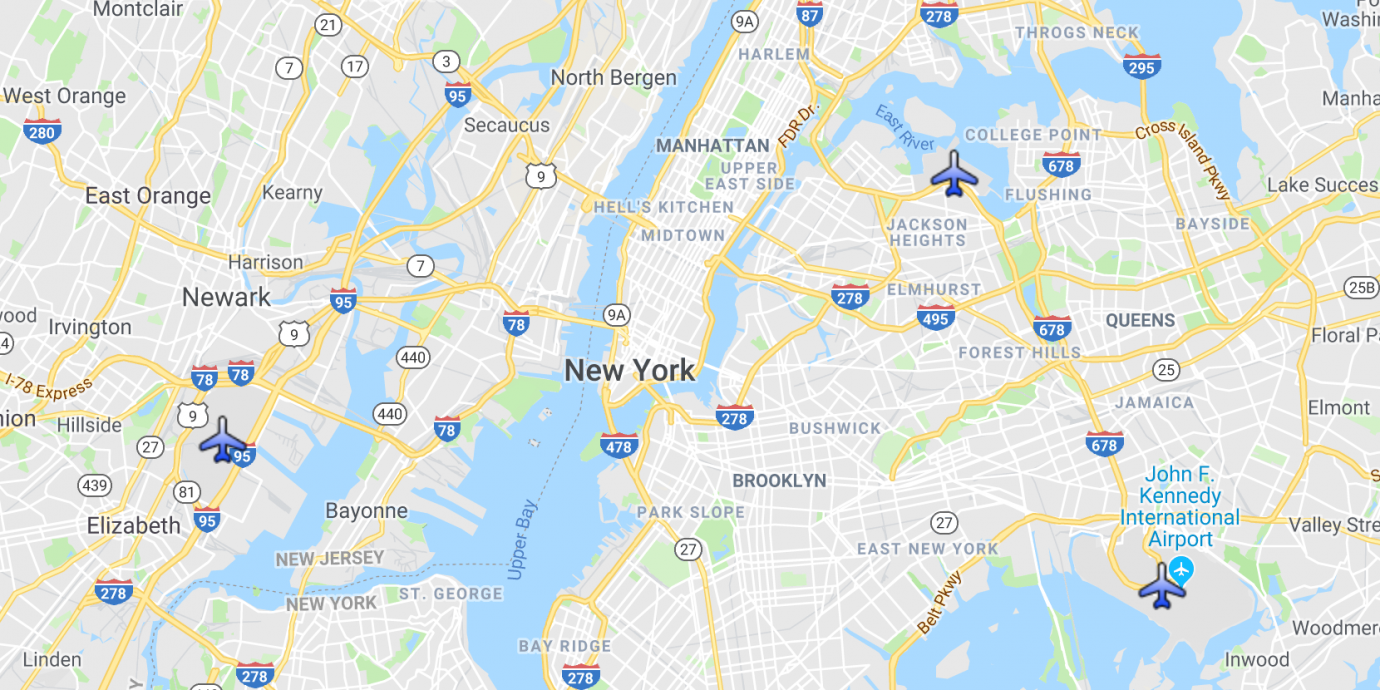