Which South Florida Airport is Best: MIA, FLL, or PBI?

Looking for a cheap flight to Miami? Depending on your final destination, it may be worthwhile to check out one of South Florida’s alternate airports. While all three airports often have low fares due to the plethora of competition flying into this region, each airport is connected to the rest of the country by different airlines.

If your final destination is South Beach, a nonstop flight to Fort Lauderdale (FLL) combined with ground transportation may be a quicker and/or cheaper option than taking a connecting flight into Miami International Airport (MIA). Make sure to compare the total cost and travel time from door to door before booking your flight. 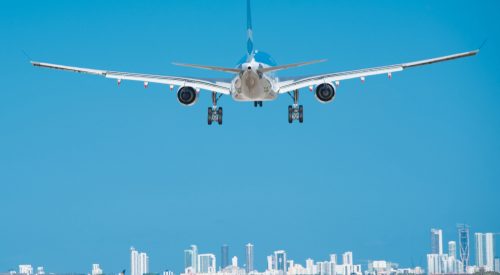 Miami International Airport (MIA) is located just 8 miles northwest of Downtown Miami and about 13 miles west of South Beach. Its location makes it the most convenient for getting to Miami Beach, which is where the majority of travelers flock to when visiting Miami.

The airport has more flights than other area airports but there is less direct competition on domestic flights since American Airlines dominates the nonstop flight network. For this reason, you’ll often see higher fares into MIA than other South Florida airports.

Miami is the main gateway from the U.S. to Latin America and is the best airport to choose for nonstop flights to nearly every country throughout Latin America. In terms of international passenger traffic, it is the 3rd busiest airport in the U.S. Since it is a major hub for American Airlines and also has flights from many international carriers, there are often fare war sales from Miami to international destinations that you might not find from other airports in the area.

There are three free automated people movers within Miami International Airport. The MIA Mover connects the terminals with the Miami Intermodal Center where you can connect to local transportation. The MIA e Train connects Concourse E with a satellite concourse and the Skytrain has four stations within Concourse D.

MIA is a hub for which airlines?

How much does it cost to get from MIA to Miami Beach?

Getting to Miami Beach can be incredibly cheap and easy from Miami International Airport. The Miami Beach Airport Express bus costs just $2.25 each way and runs daily every 30 minutes from 6 am to 11:40 pm. The buses have comfortable seating and luggage racks and will bring you within walking distance or a short Uber ride from most hotels in South Beach. And since this is an express bus, it should take approximately the same amount of time as a taxi or Uber.

If you prefer more comfort and privacy, an Uber or Lyft from the airport to Miami Beach will range between $25 - $30 depending on distance, while there is a $32 flat rate for taxi service.

Related: How to Spend a Weekend in Miami Fort Lauderdale-Hollywood International Airport (FLL) is located about 28 miles north of Miami and is often used by travelers as an alternate airport for a vacation to Miami Beach or a more convenient airport for those looking to enjoy the beaches near Fort Lauderdale.

Many low-cost carriers use Fort Lauderdale as a hub, which has considerably brought down airfares to South Florida. Spirit Airlines and Allegiant have nonstop flights from many smaller cities throughout the U.S. that don’t have service to the larger airport in Miami. And if you prefer to fly Southwest or JetBlue, both airlines offer flights that compete heavily with American’s fares to or from Miami.

International travel is mainly limited to Spirit, JetBlue, and Southwest flights to the Caribbean and Latin America as well as Air Canada and WestJet flights from Canada. Low-cost carrier Norwegian has brought cheap European flights to Fort Lauderdale and Emirates even offers service to Dubai and beyond.

FLL is a hub for which airlines?

How much does it cost to get from FLL to Miami Beach?

It may be cheaper to fly into Fort Lauderdale (FLL), but it should be noted that it can cost quite a bit more and take much longer to travel between the airport and Miami Beach. The savings still usually add up to worthwhile if you’re traveling in a group or if you don’t mind taking the extra time to travel via the Tri-Rail down to Miami.

There is a free shuttle from the terminals to the Tri-Rail station and a one-way ticket to Miami costs $3.75 per person. It will drop you at the Miami Intermodal Center where you can catch the express bus to Miami Beach or choose to Uber from there.

For those that wish to have a seamless ride from the airport to South Beach, you are now able to use rideshare apps from Fort Lauderdale and using Uber or Lyft will be a cheaper alternative than taking a taxi. Since the travel time can vary greatly depending on traffic, these services range from $40-$60, but you’ll be able to confirm the charge before you enter the vehicle.

If you’re traveling solo, it may worthwhile to book a shared van ride with either Super Shuttle or Go Shuttle for $21 per person to Miami’s South Beach. 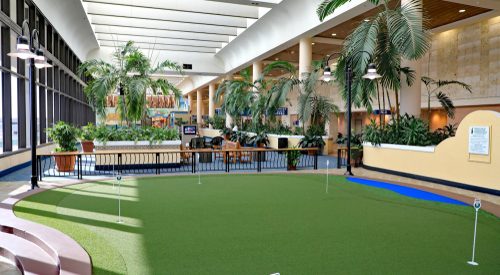 West Palm Beach Airport (PBI) is pretty far from Miami and is best used if your final destination is in the surrounding area like Delray Beach, Boca Raton, or beaches north of Palm Beach. Since it is 77 miles from Miami Beach, I wouldn’t recommend flying into Palm Beach for a trip to South Beach.

Airfares tend to be higher to/from West Palm Beach than the other two airports serving the Greater Miami area. This is mainly due to less seats and smaller aircraft flying to the airport, which mainly sees flights to airline hub cities. Seasonal flights on Frontier and Southwest get ramped up in the spring and JetBlue flies the most passengers year-round.

PBI is a hub for which airlines?

How much does it cost to get from PBI to Miami Beach?

It is still relatively cheap to get from Palm Beach Airport to Miami Beach by rail and bus―only $9.15 total―but it will take an extremely long time. The train ride alone is nearly 2 hours and after adding in the shuttle to/from each train station, it can be close to a 3-hour journey. Traveling by car is quicker at around a 1.5 to 2-hour journey, but it will cost an arm and a leg for a taxi. Lyft and Uber have reasonable rates for the long journey if you are traveling with a group and in need of a transfer between Palm Beach and Miami.

Due to the long journey and transportation costs, I would only use Palm Beach airport if it is the closest airport to your final destination and wouldn’t consider this as an alternate airport for Miami unless you wish to rent a car and explore the beaches between the two cities. 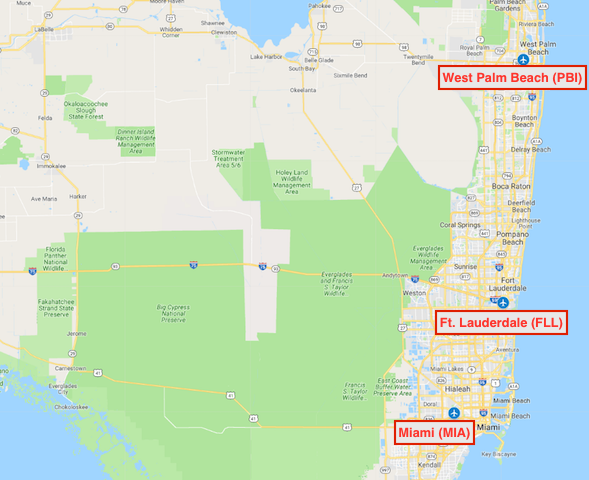