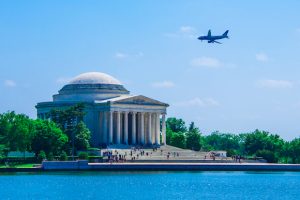 First-time flyers heading to DC often wonder which airport is best. There are three major airports with Washington in their official name yet none of them are technically within the city limits. Ask a local in the know and more often than not you’ll hear DCA National promptly rattled off before you can even finish your query. While for the majority of travelers that answer holds true, DC’s other area airports also offer distinct benefits and advantages you should take note of before ticketing your trip the nation’s capital.

Dependent on your plans in the District, knowing which airport best suits your needs can make your march on Washington all the much easier. Here’s a breakdown of Washington DC’s three commercial airport options and how they stack up against each other in terms of airline networks, transportation, location, and overall offerings.

Simply put, it’s all about location. Despite being long in the naming department, Ronald Reagan Washington National Airport (DCA) is short in the one that matters—distance to downtown. Often cited as one of America’s most convenient airports, National is a just a quick hop over the Potomac and 5 miles from downtown DC. Linked by a dedicated Metro station, out of the three area airports DCA provides the cheapest and easiest connections to the city center and popular tourist attractions.

So why bother flying into any other area airports then? National is largely limited by a perimeter rule on nonstop flight destinations, meaning most cross-country and almost all international air traffic (over 1,250 miles) is directed through its bigger brother Dulles (IAD). American Airlines holds a firm grip on most of the movement through DCA, however, recently competitors like JetBlue and Southwest are ramping up presence at the airport and wrestling over departure slots whenever they become available. This has reduced National’s once overpriced fares to regularly match lower sale prices from the two other area airports. Now with more competitive fares and its convenience factor, DCA is the top choice for domestic flyers arriving in Washington from East Coast and Midwest markets.

National is a hub for which airlines?

How much does it cost to get from National to downtown Washington DC?

DC has one of the nation’s easiest and most efficient subway systems, the Washington Metrorail, shortened to Metro by most. Out of its six lines, the Blue and Yellow lines connect to National airport. Fares are based on distance traveled, but for most arriving at DCA who wish to visit the city's' main attractions should expect to pay 2-3 dollars. Linked via a walkway to the Terminal B and C concourses the station is practically part of the airport itself.

Lyfts and Uber are one of the most cost-effective ways to get to/from DCA when traveling with a small group or partner. Since the airport is just a bridge crossing away over the Potomac River, most rides to National Mall area should take about 15 minutes or so, unless of course you’re smack dab in the middle of rush hour in which you should investigate how close your destination is to a Metro station.

For those who prefer chatting with a taxi driver and hearing some insider tips, tack on a few more dollars to your fare than taking a ride-sharing car.

Shared shuttle bus services from companies like SuperShuttle are also available at National, but one-way costs mirror those of taxis and Uber. So unless for some reason you enjoy waiting around while other travelers get picked up and dropped off it’s probably not your top option unless it’s offered as a free service by your hotel.

Located 26 miles west of downtown, sometimes transiting from Washington Dulles International Airport (IAD) to the center of DC especially during peak times can feel longer than a senior senator’s filibuster. But Dulles makes up for its distance with a robust flight network. Serving as a key hub for United Airlines and offering the most international flights out of all the area airports, Dulles is a major player when it comes to East Coast air traffic.

Unfortunately, compounding on its distance from DC is Dulles lack of streamlined public transportation. While improvements are currently underway, the best options still remain ride-sharing apps and taxis, which can be costly and downright chaotic depending on your arrival/departure times. That being said, overall airport quality is probably the highest at Dulles, with the most airport lounges, restaurants, shops, and carriers among the other area airports. Increased nonstop options from the West Coast and the only viable choice for many international travelers make Washington Dulles the best option for those wanting to avoid extra connections and are willing to brave the beltway backups, or anyone staying closer to the Virginia burbs.

Dulles also gets bonus points in my book for the nearby Udvar-Hazy Air and Space Museum which houses an Air France Concorde and the Space Shuttle Discovery; an easy and educational visit for those who have flight delays or a long layover.

Dulles is a hub for which airlines?

How much does it cost to get from Dulles to downtown Washington DC?

Contrary to popular belief, Dulles isn’t completely devoid of public transportation. While the airport doesn't have a direct AirTrain or subway link, it does offer bus service to the somewhat nearby Wiehle-Reston East Silver Line Metro Station. The bus runs about every 15-20 minutes, and the ride to the station is an additional 15 minutes. Once on the subway, tack on 40-45 minutes, making your overall journey close to an hour or hour and a half. While this is undoubtedly the most cost-efficient it’s not ideal if you’ve got heavy bags in tow, or if you arrive between 10:30 pm or 6 am (7:45 am weekends) when the bus doesn't operate. Good news is on the horizon though, as Phase 2 of the Metro’s Silver Line expansion is projected for completion in 2020 creating a direct rail link to IAD from most of “The DMV."

Ride-sharing companies are likely your best option for trekking your way into the District from Dulles; they'll have lower prices than a traditional taxi and can drop down even deeper if you take the Uber pool option. Take note that IAD charges a $4 pick-up/drop off surcharge on all rides. Again, factor in traffic depending on your arrival time, a smooth ride should take about 40 minutes – peak times, double it.

A smooth taxi ride from Dulles to DC should run you around $70, but that’s rarely the case, expect to pay more and with tip included you could be upwards of $85 to reach downtown. The pro side of taking a taxi – it's the easiest and often the quickest method.

Shuttle bus service is the happy medium for traveling to/from Washington Dulles. At less than half the price of a taxi and removing the hassle of switching trains while schlepping luggage, a shuttle bus is a reliable alternative to reach the heart of DC. Offered by multiple companies, do a quick search to see which service best works for your travel needs.

While it’s the obvious choice for those travelers whose final destination is Baltimore, (BWI) Baltimore-Washington International Thurgood Marshall Airport is also a solid option for travelers whose goal is to get to DC. Roughly a similar distance as Dulles from the district, BWI is located about 30 miles northeast from downtown Washington.

What sets BWI apart from DC’s other outpost airport of IAD is that it has a solid Amtrak/MARC (Maryland Area Regional Commuter) train station nearby with service running throughout the day linking the airport and Washington’s Union Station with the average trip totaling around 25 minutes. The patchwork of highways sprawling between Baltimore and Washington can be a nightmare for those taking to the road, especially out-of-towners, so rely on the rail link to the city if you’re flying into BWI.

So why should you consider BWI as your best choice to visit Washington DC? It can offer prices and service that the other two area airports cannot. It’s not restricted by a perimeter rule like National nor is it monopolized by a single airline like United’s stranglehold at Dulles. Thus, allowing Baltimore-Washington to become a desired destination by low-cost carriers like Southwest, Spirit, and now Frontier Airlines. Southwest leads the charge at BWI with its own terminal and with the carrier's constant fare sales, Baltimore-Washington benefits as an excellent budget-friendly base for those travelers looking for a flight deal to DC.

BWI is a hub for which airlines?

How much does it cost to get from BWI to downtown Washington DC?

Your best option for getting from BWI to downtown Washington is by train. With a dedicated Amtrak/MARC station near the airport connecting onward to DC’s Union Station is a relatively simple process. BWI’s free shuttle to the rail station runs 365 days a year where travelers can hop on the 35-minute ride to nation’s capital several times an hour throughout the day. The $7 one-way MARC fares are a bargain but use the vending machines at the station to buy them as the cost jumps to $12 onboard. Amtrak trains run about 10-minutes faster getting you to Union station in around 25ish minutes but can be costly if purchased last-minute, buying in advance can save you a bit, so long as you’re confident your plane will arrive on time.

Similar to Dulles and just about any other airport a fair distance away from the city center ride-sharing apps will cut down on the baseline cost of what a standard cab would cost especially if you can secure a flat fare without a surge added. Expect somewhere in the $55 - 60 range.

Taxi's from BWI to downtown Washington DC should be avoided if possible. Not only will they run you a mint to get to the National Mint, particularly if you are a single traveler, but they're also subject to the Beltway's infamous traffic snags. With no flat fare rates available any flight savings you might've got from flying into BWI might be all for not.

Door-to-door shuttle bus service is a nice option from BWI, but services run less frequently to DC than from the other two alternative airports. Set rates come in handy, so you know what you'll be paying upfront unlike a taxi or peak fare gauging by rideshare alternatives. One-ways cost roughly 40 dollars, and you can save a few dollars extra by purchasing a roundtrip return.

Taking to the road? Baltimore-Washington International has its own ZIP code located in Baltimore, MD 21240, USA. 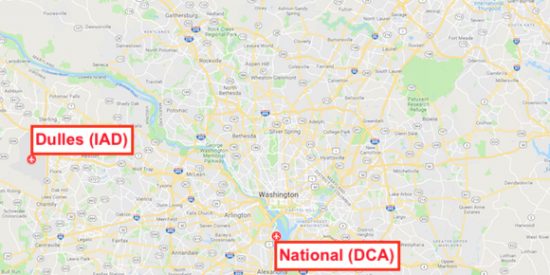