Who Flies Where? A Flight Guide for Colombia, Ecuador, Peru, and Bolivia

From exploring ancient cities to dancing the night away, South America has plenty of exciting activities for travelers. Flying to the region from North America is possible by either connecting in a major U.S. hub city, such as Miami (MIA), or transiting through Mexico or Central America. But once you’ve spent some days in a major city, you may want to venture off and see a more remote area of South America.

Although traveling by bus in this region can be luxurious compared to bus companies in North America, a flight still saves precious time. It can be expensive to fly between each country since most travel is geared towards business travelers, but leisure travel is on the rise. And if you look for some smaller airlines operating within this region, you can score some great flight deals to fly within each country and potentially across borders. 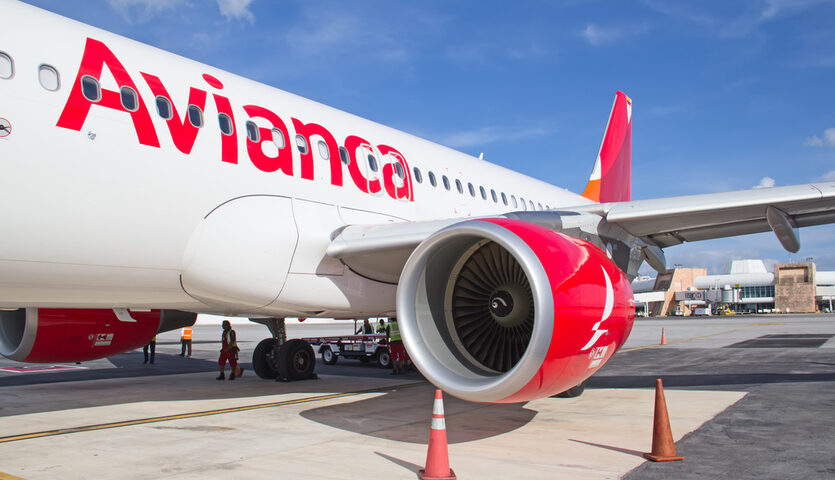 As the original flag carrier of Colombia and the oldest airline in the western hemisphere, Avianca is a major airline in this region. Its main headquarters are still based out of Bogota (BOG), but the airline has spread its wings to include branches in several other Latin American countries. You’ll find subsidiaries of Avianca in Ecuador and Peru.

Avianca has several flights throughout the Americas, the Caribbean, and to a few major hubs in Europe. Other than Bogota, Avianca also has hubs in Cali (CLO), Cartagena (CTG), Medellin (MDE), Quito (UIO), and Lima (LIM). In 2012, Avianca became a member of the Star Alliance network, which allows it to sell codeshare flights with airlines like United, Air Canada, Lufthansa, and many other member airlines.

Click here for a complete look at the Avianca route map. 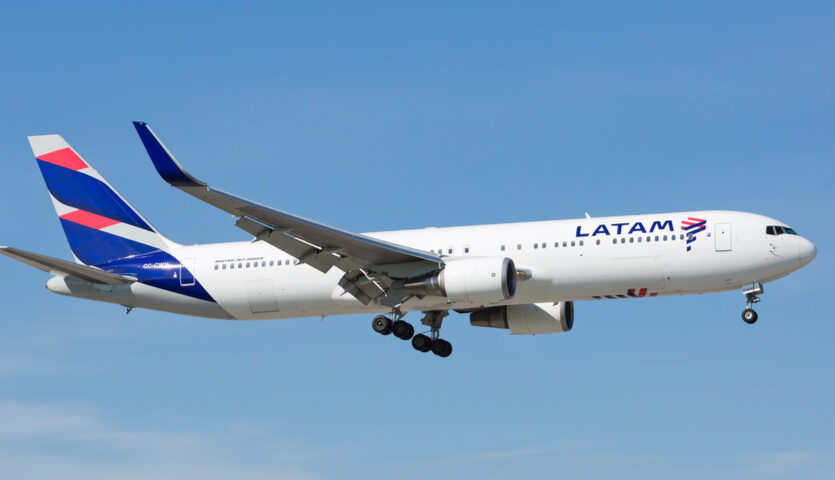 LATAM, which is an acronym for Latin American, is the result of a major airline merger between LAN and the former Brazilian airline TAM, and is now the largest airline in Latin America. While its headquarters are based in Chile, the combined LATAM Airlines Group has subsidiaries in several countries including Colombia, Ecuador, and Peru. From these countries, LATAM flies throughout the Americas, the Caribbean, and a few routes to Europe. Other subsidiaries of LATAM also have flights to Australia, New Zealand, South Africa, and the Middle East.

The largest hub for LATAM in this region is Lima (LIM) with other bases including Bogota (BOG), Quito (UIO), and Guayaquil (GYE). LATAM is a member of the Oneworld alliance and has several partners such as American Airlines, Iberia, and Qantas to connect passengers all over the world.

Click here for a complete look at the LATAM route map. 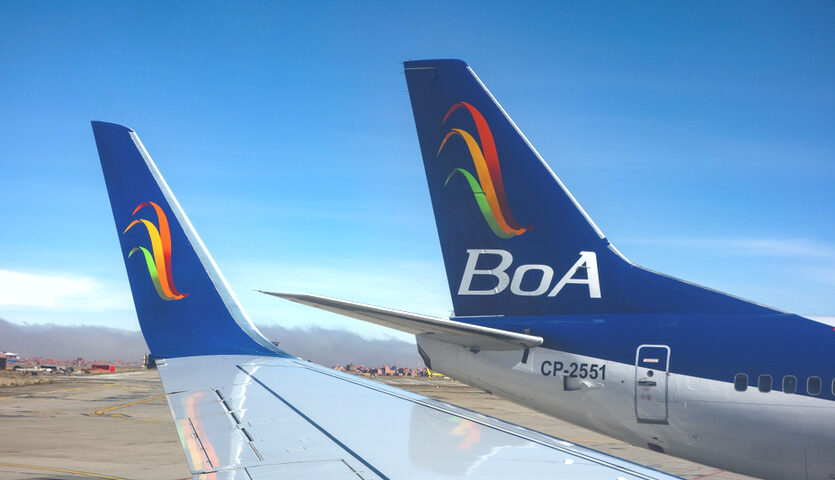 Bolivana de Aviacion, often referred to as BoA, is the flag carrier of Bolivia and is 100% owned by the Bolivian government. It is a relatively young airline, which started operating flights in 2009. Its headquarters are in Cochabamba, but the main hub is in Santa Cruz de la Sierra (VVI). The capital of Bolivia, La Paz (LPB), is also a focus city. BoA has a robust domestic network to most principal cities in Bolivia and is a great way to get close the famous salt flats in Uyuni. Its international network is limited to a few flights to nearby countries in South America, Miami, Dominican Republic, and Madrid, but it does have plans to expand to more cities around South America. A recent partnership with American Airlines allows BoA to interline to cities around the world.

Click here for a complete look at the Boliviana de Aviacion route map. 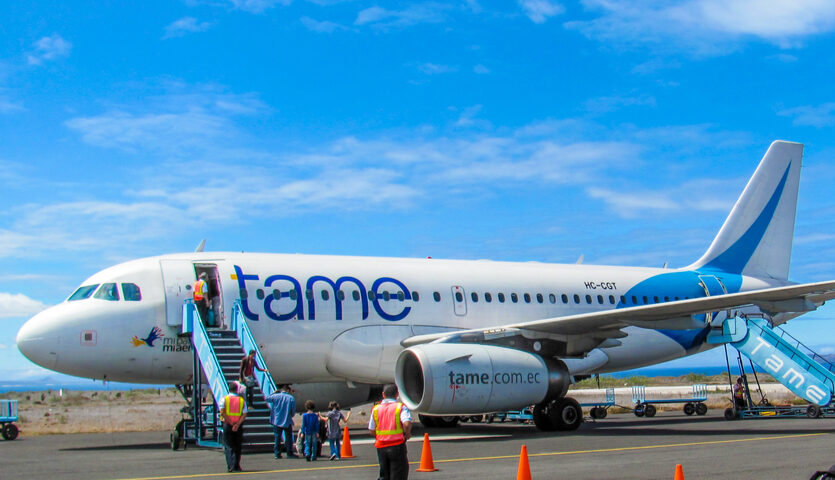 TAME, which stands for Transportes Aéreos Militares Ecuatorianos, is the flag carrier and largest airline based in Ecuador. Its main hub is the capital of Ecuador, Quito (UIO), and it lists Guayaquil (GYE) as a focus city. The route network is primarily within Ecuador with flights reaching the famous Galapagos Islands. Internationally, TAME currently only flies to Cali, Colombia (CLO) and Ft. Lauderdale (FLL) in the U.S. TAME is not part of any major airline alliance, but it does have some key partnerships with airlines around the world including Delta, United, and Aeromexico.

Click here for a complete look at the TAME route map. 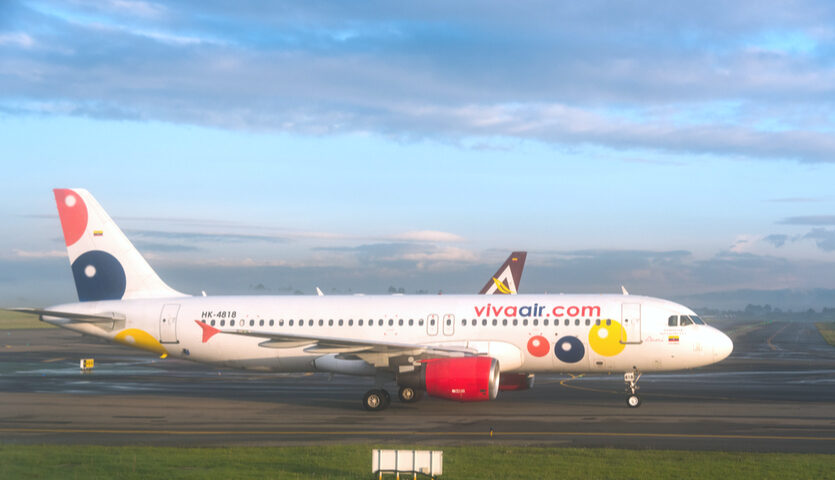 Viva Air Colombia is an ultra-low-cost carrier with operating bases in Medellin (MDE), Bogota (BOG), and Santa Marta (SMR). The airline has recently expanded to include a hub in Lima (LIM), Peru with a subsidiary called, simply, Viva Air Peru. The route network is primarily domestic within each country along with a few routes between the major cities in Colombia and Lima. The only other international destination is Miami (MIA) with Viva Air Colombia flights to Medellin and Santa Marta. Viva Air can be a great choice for a cheap flight to get close to some incredible hikes to the Lost City in Colombia or to Machu Picchu with a cheap flight to Cusco (CUZ), Peru, but keep in mind that there will be fees for any bags larger than a small personal item. 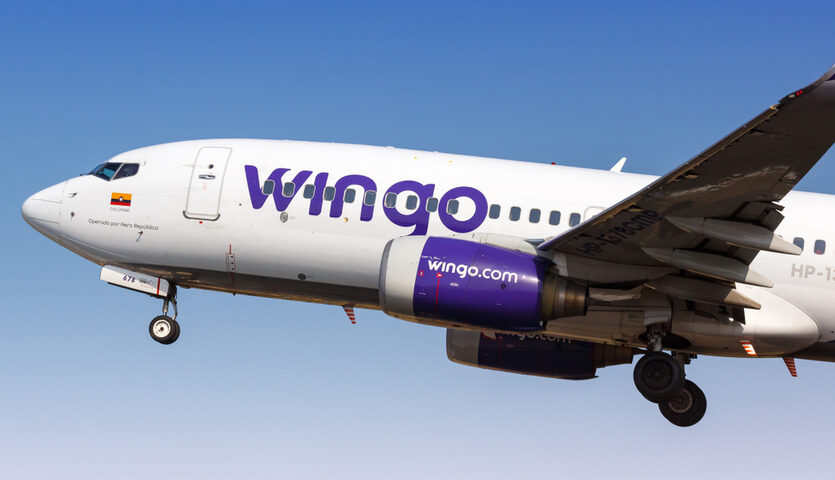 Wingo is a low-cost airline owned by Copa and replaced the now-defunct Copa Airlines Colombia in 2016. Look for Wingo flights out of its main hub in Bogota (BOG) to many nearby countries in Latin America and the Caribbean, reaching as far as Mexico (MEX). It has a strong focus on flights to the San Andres Islands (ADZ) with flights to/from 4 cities on the mainland of Colombia. Wingo also links up with its parent airline, Copa, in Panama City (PTY) from the major cities in Colombia.

Click here for a complete look at the Wingo route map.

Regional Airlines Based in Colombia This little-known Colombian airline flies a completely domestic network to many underserved cities in Colombia. Most of its flights are from/to Bogota (BOG), Bucaramanga (BGA), Cali (CLO), Monteria (MTR), and Olaya Herrera Airport (EOH) close to downtown Medellin. If you’re spending some time in Medellin, a flight on EasyFly can be a great option to see another region of Colombia, such as the Cocora Valley, since the Olaya airport is just a 5-10 minute taxi from the popular neighborhood of El Poblado.

Click here for a complete look at the EasyFly route map. (Spanish only)

Servicio Aéreo a Territorios Nacionales, or SATENA, is an airline owned by the Colombian Air Force. It has a small fleet of regional aircraft that fly domestic routes throughout Colombia from an island hopper between San Andres and Providencia to a few routes deep in the Amazon connecting a few cities where there are no roads. SATENA has its main hub in Bogota (BOG) with focus cities in Medellin (EOH) and Cali (CLO).

Click here for a complete look at the SATENA route map. (Spanish only)

Regional Airlines Based in Ecuador 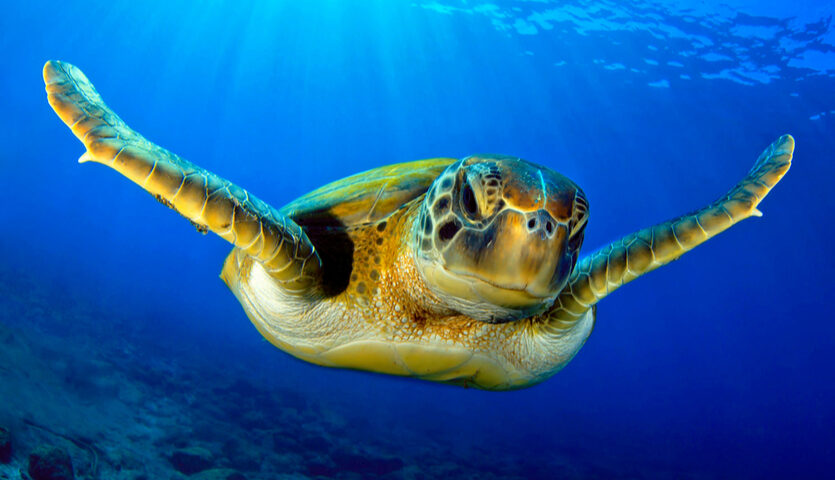 If you’re looking to do some island hopping within the Galapagos Islands, you can book flights with Emetebe. This small company offers air taxi service between San Cristobal Island, Baltra Island, and Isabela Island. Prices are steep for these short puddle jumper flights, but it can be a scenic way to take in the sights from above.

Click here for a complete look at the Emetebe route map.

Regional Airlines Based in Peru 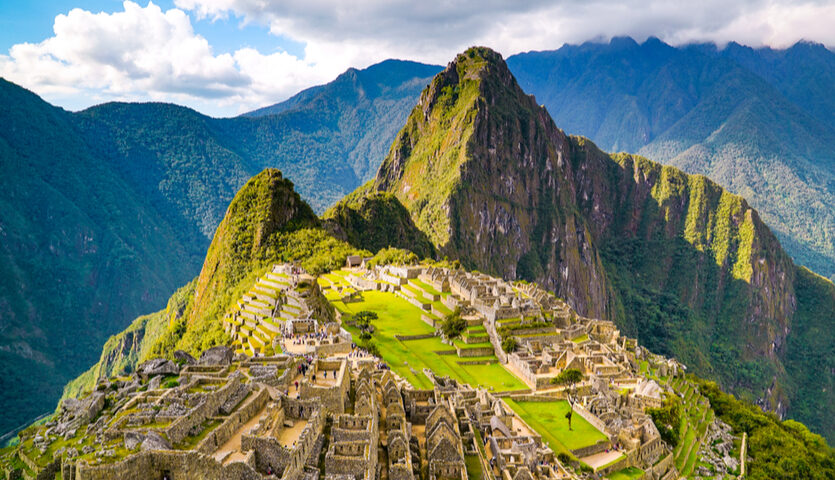 ATSA is a small airline that mainly operates charter flights, but does have a small network of scheduled flights connecting 5 smaller cities with Peru’s capital in Lima (LIM).

Check out the complete list of destinations on ATSA Airlines.

Peruvian Airlines offers several low-cost flights from Lima (LIM) to cities across Peru. It can be a great way to get an affordable flight to the Amazon region in Iquitos (IQT) or to Cuzco (CUZ), which is the jumping-off point for a visit to Machu Picchu. Another popular city with travelers on the Peruvian Airlines route map is Arequipa and you can fly as far as Tacna near the border with Chile. At the time of writing, Peruvian Airlines is listing one international city, La Paz, Bolivia, on its destinations page, but this route is no longer in service and the airport does not populate when you try to book a flight.

Check out the complete list of destinations on Peruvian Airlines.

Another low-cost airline offering domestic flights in a few markets within Peru is Star Peru. With flights from Lima to tourist hotspots in Cusco and Iquitos, the airline has a lot of competition and flights are usually very cheap on these popular routes. Star Peru also flies to a few other lesser-known cities such as Chiclayo, Cajamarca, and Pucallpa.

Check out the complete list of destinations on Star Peru. (Spanish Only)

Regional Airlines Based in Bolivia 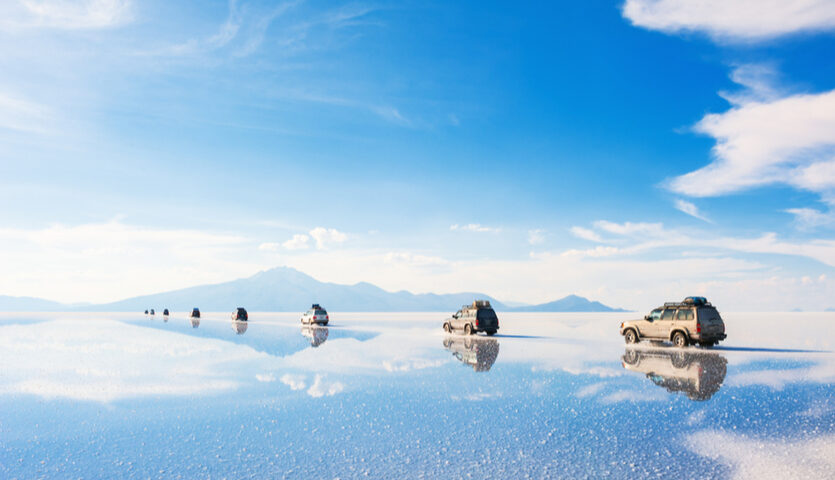 There aren’t very many airlines flying within Bolivia, but Amaszonas provides some competition to the flag carrier BoA with a few domestic flights to/from Bolivia’s capital La Paz (LPB) and its focus city Santa Cruz de la Sierra (VVI). Amaszonas also flies internationally to Peru and Chile and it has a subsidiary in Uruguay, which flies to Argentina and connects to Bolivia via Paraguay. Amaszonas is scheduled to resume flights to Brazil in December 2019.

Click here for a complete look at the Amaszonas route map.

EcoJet has a small fleet of regional jets that fly solely within Bolivia. Cochabamba (CBB) is its primary hub and EcoJet also has several flights from La Paz, Santa Cruz, and Trinidad.

Click here for a complete look at the EcoJet route map. (Spanish only)

Note: Some of the websites for the regional airlines are only available in Spanish. If you’re using Google Chrome browser, you can get a rough translation by right-clicking on an empty space on the page and choosing “Translate to English”.