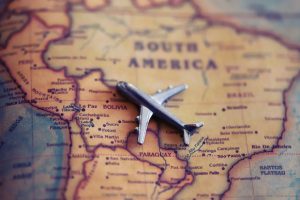 How to Save on Flights within South America

If you’re under the impression that South America is a budget destination, you might want to think twice if your plans include jetting around the continent. While it’s true that accommodation, food, and other items might be cheaper in this part of the world, flight tickets generally are not. But due to its size and tricky topography, you’ll find that at some point you'll need to take to the air to fully explore all that South America has to offer.

Here are some tried and true methods that I’ve had success with when booking my air travel in South America. See how many you can use to maximize your dollars during your austral adventures.

Don’t fall for those flight prices you see on the US version of the airline’s website or a metasearch site like Google Flights. Tickets listed as: “Local Price” or "Resident Only Fares," are no longer applicable in countries like Peru, Colombia, Chile, and Argentina, yet still populate an option on many search engines. Itinerary prices vary on South American carriers like LATAM, Avianca, and Aerolineas Argentinas’ multiple versions of their official websites because they use a point of sale reference to display fares. This means lower prices are generally offered on the localized country-specific website, while the United States or UK versions often list prices that are much more expensive.

Log on to the localized site for the country you’ll be traveling in, for example, LATAM Chile (latam.com/es_cl) site and book directly there to receive the best-offered prices. You'll need to brush up on your high-school Spanish, be semi-fluent, or you can just rely on Google Chrome’s handy translation tool to guide your way through the online booking process.

Having flown on eight flights in Argentina and Chile over the last few months using this booking method, I can attest that I’ve had no issues whatsoever. Don't believe the stories of foreigners being stopped by agents and asking for proof of residency. It hasn't happened to me, my traveling party, or anyone else I've seen at any airport and I’ve spent more than enough time there to notice. If you are a foreigner and successfully book your flight directly on the country-specific site, you’ll be good to fly.

Take note of the successfully part mentioned above. Websites are notoriously flaky, and you may see some hiccups when processing your payment using a US-based credit card. I could successfully ticket all of mine, but some payments were declined only to be successful on another itinerary. It may require a little patience, and you might need to try several different cards, but you should be able to finalize the booking. A couple of times I got issued a booking reference allowing me to pay later or in person at the airline office (which there are many throughout major cities in South America) but I never needed to do so because using a different card always eventually worked. I estimate I saved nearly 50% off listed gringo airfare prices by using this technique.

Fly to the Border

When searching for flights between two different South American nations, you’ll see that itineraries can still be extremely expensive, especially on one-way tickets. Much of this has to do with airport taxes, route networks, and the lack of interlined agreements/partnerships amongst the continents’ airlines.

A great way to circumvent paying those high priced int’l tickets is by flying to a domestic airport close to the country’s border and taking a bus, taxi, or driving across. For example, when traveling through South America, a must-see is Iguazu/Iguaçu Falls, which delineates the border between Argentina and Brazil. Many visitors spend time seeing the marvel from both sides, giving them a great opportunity to save on flights if they plan to travel onward.

A one-way ticket from Buenos Aires (EZE) to Rio de Janeiro (GIG) can cost roughly 450 dollars, but a domestic Argentinean flight from Buenos Aires (AEP) to Puerto Iguazu (IGR) can routinely go for $50 one-way. After crossing the border by road to admire the Brazilian side of the falls, one can fly from local airport of Foz do Iguaçu (IGU) to Rio de Janeiro (GIG) for about $75 one-way. Nearly a quarter of the price of the nonstop connection between the two cites, all while building in a stopover to see one of the World’s top natural wonders on the way.

Another benefit and bonus of booking directly on the South American localized sites are that many airlines often run promotional deals there that never reach the front page (or at all) on the U.S. or international branded sites. These promotional deals are much like the fare or flash sales we see in the States that get posted for a limited time on select travel dates, so its best to check regularly.

I was able to take advantage of a Cyber Monday deal that was listed on LATAM’s Argentine site to take off 30% of the listed fare price on a flight from Buenos Aires (AEP) to Iguazu Falls (IGR) that I wouldn’t have seen posted by only visiting the U.S. version. Again, you’ll need to know a pinch of Spanish or Portuguese depending on the site, but the reductions easily translate into savings.

Here are a couple of other tricks to try and save on fares that don't seem to work as well in the States. I've noticed that many South American carries tend to add inventory or extra flights during peak periods and on popular routes. While U.S. airlines have set schedules, let's just say things are in a state of constant flux in many South American countries. Departure times, travel days, and routes seem to be much more malleable with airlines operating in this region of the world, allowing for new flight options to pop up in a moment’s notice.

After exploring Patagonia, I needed to find a way from El Calafate (FTE) to Ushuaia (USH) to board my cruise departing for Antarctica. I kept an eye on the flight schedule between these two smaller airports, as I knew it tends to be an expensive leisure route during peak summer with only a few nonstop options available. Aerolineas Argentinas operates two nonstop flights between the airports both with price points nearing $160+ for a one-way ticket, an amount I found steep for the roughly hour-long hop.

I looked into a bus ride down but the prospect a full day road trip with two border crossings and a ferry wasn’t something I wasn't entirely sold on. So, over several days, I kept rechecking to see if flight prices would dip a little and, lo-and-behold, a LATAM nonstop option on that exact route showed up in my search for $45 one-way! Out of the 6 or 7 times, I rechecked this route it was never displayed as an option, not even when I searched directly on the LATAM website. It seemed that the airline added a flight to its schedule or it was selling extra seats on a charter flight. Didn’t matter to me as I quickly booked the out-of-the-blue discounted deal instead of shelling out over triple the price for the Aerolineas options.

Of course, you can’t always count on this same situation to happen, but it's a strategy that might work as long as you’re diligent on checking flights before settling on what’s being displayed online. By doing so, you can also find last-minute deals at excellent prices, which is something that rarely happens anymore stateside.

For example, flights from Santiago (SCL) to Easter Island (IPC) can be insanely expensive with many of them nearing $1000 roundtrip on itineraries a few months out. While searching for last-minute deals and added inventory, I saw that a handful of dates departing the following week were posted for $311 roundtrip — a stellar price for that particular route and season. I simply couldn’t say no to that type of deal and shuffled around some of my other travel plans to make it work. If you’re backpacking around or able to leave some of your travel open-ended in South America you’ll see that being a last-minute booker can lead to some serious savings.

For the longest time, low-cost-carriers in South America were non-existent. State-run airlines were the only option and they had a stranglehold on fares. But in recent years, the South American airline landscape has changed with the launch of several upstart low-cost-carriers bringing some much-needed disruption to a stale marketplace.

As with many LCC models throughout the world, these South American counterparts offer the same no-frills options and tack on added charges for baggage, in-flight food, drinks, seat assignments, and ticket changes. While the fees and extra costs for services rankle many travelers, the competitive fare prices they bring to the market have been a breath of fresh air for flyers. Keep in mind that some of these carriers fly to/from secondary airports so make sure you do your homework and find out if the savings outweigh the extra travel and time incurred.

Most of the above airlines listed focus on domestic service, with limited international routes offered. Expansion and service are continually getting added, so it's best to click on the carrier’s web link provided above to view up-to-date route networks.