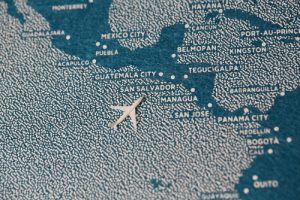 Who Flies Where? A Guide to Mexico/Central American Airline Coverage

Flying to Mexico or Central America? Don’t overlook the local carriers for a cheap flight south. And if you’re looking to travel within the region, there are plenty of airlines you may never have heard of before.

These Are the Regional Airlines of Mexico and Central America

From well-established carriers like Aeromexico and Copa Airlines to smaller regional airlines like MAYAir and Air Panama, here’s a guide to coverage from airlines based in Mexico and Central America.

Large Airlines Based in Mexico and Central America As the flag carrier of Mexico, Aeromexico is the largest airline in the country with flights to every corner of Mexico. The main hub in Mexico City (MEX) also serves several international destinations in the Americas and a few routes across the ocean to both Europe and Asia. As a SkyTeam member, it partners with Delta in the U.S. and many other international carriers to provide a wide network of flights throughout the world.

Click here for a complete look at the Aeromexico route map. In 2009, Colombia based Avianca announced it would merge with TACA in Central America to create one of Latin America’s largest airlines. By 2013, all of TACA’s branding had been switched over to the Avianca brand, which now has subsidiaries in five different nations in Central America; Costa Rica, El Salvador, Guatemala, Honduras, and Nicaragua. Its main base in the region is San Salvador (SAL) followed by San Jose (SJO) and Guatemala (GUA). Flights on Avianca’s Central America subsidiaries are available throughout the Americas and as part of the Star Alliance network, it codeshares with United and several other carriers for flights around the world.

Click here for a complete look at the Avianca (Central America) route map.

Based in Panama City (PTY), Copa Airlines is the flag carrier of Panama and is also a member of the Star Alliance network. With its convenient hub location, Copa Airlines is a popular choice for travelers connecting from North America to South America. You’ll find flights from many major cities in the U.S. and a few in Canada with connections to most Latin American nations as well as several islands in the Caribbean.

Click here for a complete look at the Copa Airlines route map. 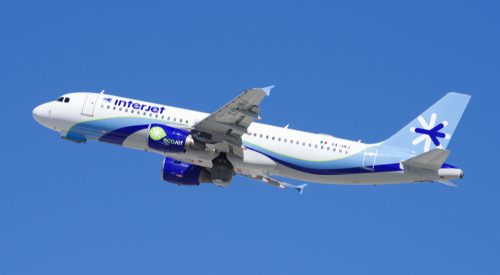 One of Mexico’s low-cost airlines, Interjet operates the majority of its flight network through its biggest hub in Mexico City (MEX). It also has focus cities in Cancun (CUN), Guadalajara (GDL), and Monterrey (MTY). Interjet mainly operates flights within Mexico, but also serves some major cities in the U.S., Canada, Central America, Cuba, and northern South America. Interjet has codeshare agreements with American, Iberia, and LATAM, and other partnerships, but is not a member of any airline alliance.

Click here for a complete look at the Interjet route map. Volaris is the largest low-cost airline in Mexico and also has a subsidiary in Costa Rica. Its main hub is Guadalajara (GDL) with secondary hubs in Mexico City (MEX) and Tijuana (TIJ). Volaris also has focus cities in Cancun (CUN), Guanajuato/Leon (BJX), Los Angeles (LAX), and Monterrey (MTY). Volaris Costa Rica operates out of bases in San Jose (SJO) and San Salvador (SAL). It is the second largest airline in Mexico after flag carrier Aeromexico and serves many cities throughout Mexico, the U.S., and Central America. In 2018, Volaris partnered with Frontier Airlines to offer more connections in the U.S. but is not part of any airline alliance. With limited destinations outside of Mexico, you’ll likely only find VivaAerobus flights when traveling within Mexico. Hub cities include Monterrey (MTY), Guadalajara (GDL), Mexico City (MEX), and Cancun (CUN). If you’re flying from the U.S., look for VivaAerobus flights from Los Angeles (LAX) to Guadalajara and Las Vegas (LAS) to Mexico City. A few other seasonal routes may be offered.

Click here for a complete look at the VivaAerobus route map.

Small Regional Airlines Based in Mexico Aeromar primarily operates flights within Mexico to and from Mexico City (MEX) with one lone international flight to McAllen, Texas (MFE).

Based in Cabo San Lucas, Calafia Airlines has a small fleet of Embraer aircraft flying mostly between the smaller local airport closer to Cabo San Lucas (CSL) and several cities throughout western Mexico. If you fly into the international airport in San Jose del Cabo (SJD), look for flights to other destinations in Mexico on Calafia Airlines once you’ve settled in Cabo.

With operating bases in Mexico City (MEX) and Monterrey (MTY), Magni Charters mainly sells vacation packages within Mexico to beach resorts and you can also book flight only options if you wish. Brush up on your Spanish or translate the page in your browser as there doesn’t seem to be an English language version.

Based in Querétaro (QRO), TAR Aerolineas is focused on flying nonstop regional routes throughout Mexico without the need to connect in Mexico City. Once you arrive in Belize (BZE), you may want to do a little island hopping by flying on Maya Island Air. Short flights are offered to places such as San Pedro, Caye Caulker, and down the coast of the mainland as well.

Another island hopper to check out in Belize (BZE) is Tropic Air. Not only will you find short flights around Belize, but you can also fly to international destinations in the region such as Cancun (CUN), Flores, Guatemala (near Tikal), and Roatan, Honduras (RTB).

Skip the winding roads of Costa Rica and fly from San Jose’s Pavas Airport (SYQ) to several cities throughout Costa Rica. Note, this airfield is separate from the main international airport in San Jose (SJO). You can also fly Aerobell Airlines to Bocas del Toro (BOC) in neighboring Panama.

If you’re looking to connect to Bocas del Toro, Panama or another smaller city in Costa Rica, such as La Fortuna or Tamarindo, directly after your international flight into San Jose (SJO), you may want to try Skyway since it utilizes the Juan Santamaría International Airport in San Jose.

For commercial service in the region, Avianca El Salvador will be your best bet. But if you want a custom itinerary and a private flying experience, you can contact TAES for a domestic flight within El Salvador or to neighboring countries in Central America. Translate the page to English in your browser if you aren’t fluent in Spanish.

After touching down in Guatemala (GUA), you can fly domestically on TAG to places like Flores to visit Tikal or hop over to major cities in other Central American countries like Belize, El Salvador, and Honduras.

Click on the U.S. flag in the upper right-hand corner of the AeroCarbie homepage to get an English version of its website. It advertises a few domestic flights within Honduras mostly from La Ceiba or Guanaja, but you may need to call or email to get information on when flights are currently operated as I was unable to find any flights with the online search calendar.

The CM stands for “Cielo Maya”, which means Mayan Sky. Scheduled flights are available to tourist destinations throughout Honduras from both international gateways in San Pedro Sula (SAP) and Tegucigalpa (TGU). The airline also has an agreement with TAG to sell tickets to and from Guatemala (GUA).

Another airline for domestic flights within Honduras is Lanhsa, which advertises limited flights from La Ceiba (LCE) and Tegucigalpa (TGU) to tourist destinations around Honduras. Click on the U.S. flag in the upper right-hand corner of the Lanhsa homepage for English.

While La Costeña operates flights for Avianca Nicaragua, it does have its own website where you can find flights from Managua (MGA) to domestic locations around Nicaragua such as Bluefields or Corn Island and one international destination to the capital of Honduras in Tegucigalpa (TGU).