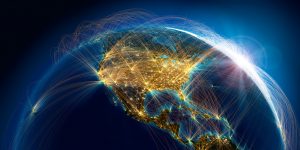 Who Flies Where? A Guide to North American Coverage by Carrier

Have you ever wondered where your favorite airline could take you? Sure, you’ve heard of the major carriers like American, Delta, United, and Air Canada, and, with a wide network all over the world, these airlines can take you nearly anywhere. But there may be some lesser-known routes under the radar.

Find Out Where U.S. and Canadian Airlines Fly

There are many different types of carriers to choose from today including semi-private jets, low-cost carriers, and legacy carriers. To find out where each of these airlines fly, here’s a guide to coverage by each North American carrier.

The flagship carrier of Canada is part of the Star Alliance network and, along with its partners, Air Canada sells tickets to locations all over the world. With hubs in major Canadian cities Toronto (YYZ), Montreal (YUL), Vancouver (YVR), and Calgary (YYC), Air Canada flights are available to small and large cities across Canada, most larger cities in the U.S., and major hubs in Europe, Latin America, Asia, and Australia.

Air Transat focuses on seasonal leisure travel from major Canadian gateways to warmer destinations such as Florida, the Caribbean, Mexico, and Central America. During the summer months, Air Transat shifts its flight network to focus more on flights to major European destinations.

While Alaska is in its name, Alaska Airlines’ primary hubs are in Seattle (SEA), Portland (PDX), San Francisco (SFO), and Los Angeles (LAX). That being said, the airline still has the most coverage in Anchorage (ANC) between its own flights and partner Horizon Air. Most of Alaska Air’s flights connect cities on the West Coast, but with its acquisition of Virgin America, it has expanded to include transcontinental flights and more options between the West Coast and the Midwest. Alaska Airlines also has plenty of flights to Hawaii and Mexico from the West Coast, and a couple of routes to Costa Rica.

Looking for a nonstop flight from North Dakota to Las Vegas? You’re in luck. Allegiant Air’s business model is all about flying from smaller markets to leisure destinations across the U.S. For cheap nonstop flights to its hubs in Las Vegas (LAS), Orlando-Sanford (SFB), St. Petersburg (PIE), Myrtle Beach (MYR), Phoenix-Mesa (AZA), Los Angeles (LAX), and more, check out what Allegiant has available.

Click here for a complete look at Allegiant‘s route map.

The largest airline in the world is also part of the Oneworld Alliance, which means nearly every corner of the globe is accessible on American or one of its partners. American’s hubs in Dallas (DFW), Chicago (ORD), Miami (MIA), Philadelphia (PHL), Charlotte (CLT), Phoenix (PHX), and Los Angeles (LAX) will connect you on American flights throughout North America and major cities in Europe, with a strong focus on flights to the Caribbean and Latin America. American has limited service to Asia and the South Pacific, and relies mostly on partner airlines to serve that part of the world.

Boutique Air is a unique airline that offers semi-private jet flights in primarily commuter markets. These routes are scattered throughout the country with Denver (DEN) and Dallas (DFW) having the most connections. A recent partnership with United Airlines allows for a few connecting flight options. If you’ve ever wanted to experience a luxury flying experience for the price of a coach ticket, check out where you can go on Boutique Air.

As you may have guessed, Cape Air’s main operation is serving smaller markets in Cape Cod/New England to/from its main hub in Boston (BOS). But did you know Cape Air also has flights throughout the Northeast, Midwest, Eastern Montana, the U.S. Virgin Islands, and Puerto Rico? Check out what Cape Air offers from its smaller hubs in St. Louis (STL), Billings (BIL), and San Juan (SJU).

One of the “big three” legacy carriers, Delta is a member of the SkyTeam Alliance, which offers service throughout the world on its own metal or partner airlines. With hubs in Atlanta (ATL), Detroit (DTW), Minneapolis (MSP), Salt Lake City (SLC), New York (JFK), Seattle (SEA), and Los Angeles (LAX), Delta has widespread coverage throughout the U.S. with the Southwest being its least covered region. Delta also serves the major hubs in each continent, with the most coverage in Africa of any other U.S. airline.

Click here for a complete look at Delta‘s route map.

Flair Air is a budget carrier based in Canada that brought a much-needed shake-up to unusually high domestic Canadian airfares. Its main hubs are in Edmonton (YEG) and Winnipeg (YWG) with service to some major markets in Western Canada and Toronto (YYZ) in the east. For those looking for a winter retreat, Flair Air also serves warm weather destinations in the U.S. such as California, Nevada, Arizona, and Florida.

Hawaiian Airlines’ main routes are between West Coast cities and the Hawaiian Islands in Honolulu (HNL), Maui (OGG), Kona (KOA), and Kauai (LIH). It has recently expanded to include nonstop flights to Hawaii from two of the biggest markets on the East Coast as well. Beyond Hawaii, the airline offers connections to the South Pacific and Asia, and allows stopovers in Hawaii, which can be an enticing way to break up a long trip.

JetBlue’s hubs include New York (JFK), Boston (BOS), Fort Lauderdale (FLL), Orlando (MCO), and Long Beach (LGB). The airline is primarily focused on East Coast flights, major market transcontinental routes, flights to the Caribbean, and a few cities in Latin America. The smaller base in Long Beach covers major cities along the West Coast, but the Midwest is mostly left out of JetBlue’s route map.

Click here for a complete look at JetBlue‘s route map.

JetSuite X is another semi-private jet experience that operates commuter routes within California and between California and Las Vegas (LAS). The airline utilizes private terminals at some major airports so you’ll get a very personal experience for not much more than the price of a coach ticket.

Porter Airlines is Eastern Canada’s budget carrier with its main hub in Toronto’s City Airport (YTZ). It flies to many cities in Southeastern Canada and major cities along the East Coast of the U.S. It has also partnered with JetBlue to offer more connections throughout the U.S.

If you’re looking for a flight within Florida, Silver Airways will have you covered. With its biggest hub in Fort Lauderdale (FLL), Silver Airways has nonstop flights between many Floridian cities and also a good number of flights to the Bahamas. It has attempted to venture outside of this region with a few random flights in other parts of the country, but these routes do not usually last more than one season.

Click here for a complete look at Southwest‘s route map.

A regional airline covering the Mid-Atlantic and the Gulf, Southern Airways Express has focus cities in Pittsburgh (PIT), Baltimore (BWI), Dallas (DFW), Memphis (MEM), and West Palm Beach (PBI). It also has a partnership with American Airlines in order to offer connections to more places.

Spirit Airlines is possibly the most well-known ultra-low-cost carrier in the U.S. It has helped bring down prices on all airlines and continues to expand into new markets. Primary hubs for Spirit include Fort Lauderdale (FLL), Chicago (ORD), Dallas (DFW), Las Vegas (LAS), Detroit (DTW), Orlando (MCO), Atlantic City (ACY), and Myrtle Beach (MYR). The airline often competes directly with the major carriers on the most popular routes in the nation. It also has a heavy presence in the Caribbean and Latin America, which helps keep international travel reasonable in each market Spirit flies.

Click here for a complete look at Spirit‘s route map.

Once a hometown-only airline for Minneapolis/St. Paul (MSP), Sun Country has begun to expand with more nonstop flights throughout the U.S. Even a few routes to Hawaii! While the majority of flights are between Minneapolis and major cities across the U.S., Sun Country now has focus cities in Dallas (DFW), Nashville (BNA), St. Louis (STL), and Portland (PDX). For international travel, Sun Country has mostly seasonal service to resort towns in Mexico and a few select Caribbean destinations.

Sunwing is another leisure travel airline based in Canada. It has nonstop flights from many Canadian cities to warm weather hotspots in Florida, Mexico, Central America, and the Caribbean. While Sunwing is primarily a package deal charter airline, it is possible to purchase an air only ticket. However, you may get a much better deal by booking a package.

Click here for a complete look at Sunwing‘s route map.

Canada’s newest ultra-low-cost carrier has cheap flights from secondary airports in Hamilton (YHM), which is in the Toronto area, and Abbotsford (YXX), which is in the Vancouver area, to a few locations throughout Canada. While these are the primary hubs, the small airline also offers other flights between Canadian cities such as Edmonton (YEG) and Winnipeg (YWG). Internationally, Swoop has a limited network to warm weather destinations in the U.S., Mexico, and Jamaica.

Click here for a complete look at Swoop‘s route map.

One of the major legacy carriers based in the U.S., United is also part of the Star Alliance network and sells tickets throughout the world by code sharing with its many partners. Within the U.S., United has hubs in Chicago (ORD), Newark (EWR), Washington-Dulles (IAD), Houston (IAH), Denver (DEN), San Francisco (SFO), and Los Angeles (LAX). This hub network does a good job of covering the Northeast, parts of the Midwest, and the South, but there are gaps in coverage in the Upper West and Southwest U.S. Worldwide, United has plenty of flights to Latin America, the Caribbean, Europe, and Asia, with United having the most presence in Asia of any other U.S. airline. It also has a few flights to Australia and New Zealand.

Click here for a complete look at United‘s route map.

This little-known regional airline has begun to expand. Its main purpose has been to shuttle leisure travelers between Orlando-Sanford (SFB) and smaller cities in the Southeastern U.S. More recently, it has expanded to include many nonstop flight options from Austin (AUS) and a few other random routes out of Memphis (MEM), Birmingham (BHM), and Pittsburgh (PIT).

Canada’s second largest airline may not be as expansive as the flagship Air Canada, but WestJet has transitioned from a low-cost carrier to a major competitor in the Canadian market. Its main hubs are in Calgary (YYC), Vancouver (YVR), and Toronto (YYZ), with focus cities in Edmonton (YEG), Winnipeg (YWG), and Halifax (YHZ). In addition to flights throughout Canada, WestJet offers service to many cities throughout the U.S., Mexico, Caribbean, Central America, and Europe. It also has a partnership with Delta, which allows it to sell tickets to more places worldwide.

Click here for a complete look at WestJet‘s route map.

This list may not include all airlines based in North America, but I’ve included the major carriers along with a few smaller airlines you may not know about. Route networks and schedules are always changing so be sure to check out each airline’s route map and get creative when deciding how and where you want to travel.