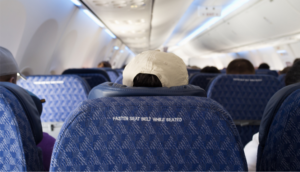 Finally! Middle Seats Will Soon Be Larger on Some Airlines

Be it window or aisle, everyone has their preference when it comes to choosing a seat. And while there are surely some who genuinely enjoy a middle seat, most of the traveling public agrees that anything between aisle and window is something to be avoided. After all, who wants to compete for a spot on not one but both armrests?

However, the dreaded middle seat may soon receive a makeover. Plans from airline seat designers Mono Labe call for a roomier, wider middle seat for use on short-haul flights. The new seating model relies on a slightly staggered configuration which boosts the seatback width by 3 inches, from 18 to 21 inches. A few extra inches may not sound like much, but it’s enough to keep you from sitting shoulder to shoulder with a seatmate. A long haul version is also in the works which would include extra padding and larger seatback screens.

Related story: Passenger Etiquette: The Basic Rules of the Armrest

“We have discovered that what looks like a small stagger actually makes a huge difference,” said Molon Labe founder Hank Scott. “The trick is to actually sit in the seat. In fact, our main sales tool is to ship seats to airlines so they can sit in them.”

As seen in the video, the seat is recessed very minimally as not to disrupt the flow of passengers moving in and out of the aisle. That also means that these seats won't recline, something that's sure to be a dealbreaker for some.

It’s difficult to know just how well such a layout might perform in the wild, though we may soon find out. At least two airlines have purchased these seats for future use, according to CNN. Molon Labe declined to name which carriers, one of which is known to be an American airline.

The seats have received the green light from the FAA and should be in use by spring 2020.

Related story: Use these Tips to Secure an Empty Seat Beside You on Your Next Flight