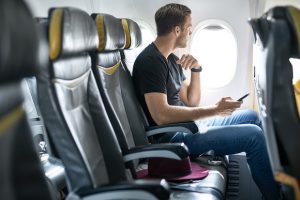 With flight loads at historic highs, miraculously finding an empty seat next to you is almost like hitting the jackpot. In the U.S. alone, load factors have risen to just over 87 percent, nearly 17% up from 15 years ago. All while the number of daily flights has remained relatively stagnant. Globally, the numbers are similar. While not as drastic, commercial flight load factors are just a bit over 80 percent worldwide.

Easily broken down: the same amount of flights cramped with a lot more passengers.

In the airline’s perfect world, they would love to see every seat occupied, but for the common customer, being on a half-empty plane is a blessing. Especially nowadays, with ever-shrinking leg space, any extra wiggle room is welcomed. And the carriers know this all too well. This is why those preferred and now even those plain old standard seats located near the front of the plane are priced to increase revenue via pre-flight selection fees.

Finding that empty row to lie across might seem like a pipe dream, but there are ways to see how big the load factor is and where the empty seats are on your upcoming flights. Hint: usually at the back of the airplane.

If a flight is sold out, no matter how many tricks you have up your sleeve, it's likely a no go on that extra elbow room. But the following tips will help you view how open the seat map is on your airplane as well as give some strategies on how to score that elusive empty neighboring seat.

What seems like a no-brainer, make sure you check up on your flight's seat map availability before departure. I'd recommend doing so multiple times, even up to a week in advance of the 24-hour check-in. While the planeload looked empty when you booked months ago, a lot could've happened. Not only might it now be full to the brim, but the carrier might've also switched the aircraft model on that route. The aisle seat you initially picked could’ve changed too, leaving you stuck somewhere in the middle.

Most U.S. based airlines have opened up their seat maps to customers during the booking process in hopes that they will pony up for the preferred seats. What I’ve found to be helpful is to initially pick a place that I want to fly in from the get-go with the assumption that the plane will fill up. Then during or right before online check-in opens, if I notice that my row is full, I’ll make a last-minute switch to one that looks like it may be empty. While not always a guarantee, it usually improves my chances of getting that desired empty neighboring seat.

Not the most groundbreaking tactic, but it's proved useful many times, and you'll be amazed at the number of people who will just pick a seat and never re-check or wait until it gets assigned at the airport.

The Aisle and Window Method

If traveling as a couple and the aircraft features a layout of three-seats across, you can try your hand at the aisle and window method. While selecting seats, simply pick those two while leaving the empty place open in the hopes that no one will manually choose the middle spot. Because let's face it, what person in their right mind would want to pick that as their first option.

If the plane is full and someone gets assigned the middle, almost 99% of the time, you can convince him or her to swap out the feeling of being awkwardly stuck between the both of you. Offer up the aisle or the window so you can still sit together, and hope for better luck next time. This method usually works best toward the back of the plane, as airlines tend to fill up the middle seats from front to back. I've noticed that while selecting seats on some carriers, they have cracked down on this practice and in a few cases will only let you choose seats adjacent to each other, so try it while it lasts.

Almost every airline has it’s own mobile application available for download. Not only are these handy for boarding passes, flight alerts, baggage tracking, and gate changes, many often display seat maps. On a few airline apps, they'll even let you swap to another open seat if it hasn't been assigned only minutes before check-in. If it's too late to make a change or the app won't allow it, you can usually still view the seating plan and see where there are some vacancies. With this info in hand, make your way up to the gate agent and ask if they'd be willing to make the seat switch for you.

Fly a New Airline or Route

Being the first to fly on a new airline or a new route doesn’t always mean you are the guinea pig. Often you’ll get the best service on new airlines as they try to build up clout and recognition in a new market. On a new carrier or a freshly introduced route, it can often take quite some time before customers respond, and the seats begin to fill up. Upping your chances of having a lighter passenger load.

Another tactic that can help to avoid packed planes is to connect via smaller airports like Cincinnati (CVG) and avoid mega-hubs like Atlanta (ATL). Flights are less likely to be sold out, giving you better odds of securing an empty seat.

Related: The Most Exciting New Routes in 2020

Pay for the Privilege

Sometimes you’ll have to concede to the company’s bottom line. If that extra space means a much better flying experience, you might have to break out that credit card and spend a bit extra. If you notice a bunch of the premium seats are still up for grabs, you can ante up in the hopes that no one else will.

If traveling as a group or with a partner, the aisle and window method can really pay off here. Not many people want the middle seat, and zero people want to pay extra for it. Again, it's a roll of the dice. If there are a lot of frequent flyers or elites on your flight, chances are they might get assigned to a preferred seat next to you. On international routes, you might have more luck as more customers aren’t likely to have status. For longer flights, even if you do get stuck next to someone, the preferred seat could be worth the money over the long haul, pun intended.

If all else fails, do the unthinkable: talk to the airline employees. Sounds crazy, right?

Being friendly and polite can still get you far with people this day in age. If you ask kindly during check-in or at the gate if the flight is full or if there is a bank of unclaimed seats that you can get moved to, more often than not, the agents will try and help you out.

On many international flights, the same employees that check-in in your baggage do double duty at the gate and might also serve as flight attendants. So putting in a nice word early at the check-in desk might pay off later. There have been a few times when I’ve asked if an exit row seat is available when dropping off my bags only to be told I’ll have to wait until check-in closes. Later at the gate, I'm remembered and swapped out to a better seat.

Having an empty seat next to you on a flight is a bonus and shouldn’t be expected. It doesn't matter if you are Quadruple Diamond Plus Preferred frequent flyer or the pilot was your college roommate. If the flight is full, you'll have to deal with it.

Continuously pestering check-in or gate agents won’t help you land the seat you want and name dropping or claiming how often/or you’ll never fly with such-and-such an airline again won’t work either. On airlines like Southwest, where boarding is open, holding a seat or placing a bag to “claim” a seat will only annoy flight attendants and possibly the seatmate you eventually get paired next to. If you want to learn how to improve your odds on a Southwest flight, have a look at our comprehensive guide on how to fly with them here.