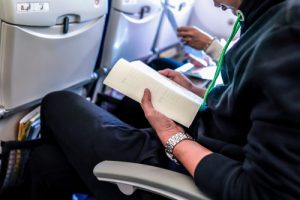 Passenger Etiquette: The Basic Rules of the Armrest

Airlines continue to dream up new ways to maximize profits, and always at the expense of passenger comfort. Seats seem to shrink by a sliver of an inch every few years, becoming lighter, thinner, more narrow. And suddenly, all that shrinking allows for another seat to be crammed into the row.

Passenger Personal Space and the Rules of the Armrest

Armrest etiquette has always been a point of debate among travelers, and will only get worse as we’re forced to sit closer and closer together.

There’s really no question as to who can claim the outward armrests for both window and aisle seats. Meanwhile, the unfortunate middle sitter has no dedicated arm rests of their own. As a matter of basic compassion, most travelers tend to yield to the middle passenger, allowing them control of the entire armrest. Some even manage a 60/40 split, with the middle passenger taking the prime elbow zone to the back, while the window or aisle passenger would make do with a partial resting of the wrist or hand to the front of the armrest. It’s really the most peaceable solution!

There still remains the issue of armrest air rights, an area of basic personal space that extends above the arm rest.

Beyond elbow placement, most travelers probably don’t give much thought to the air space above the armrest, at least until some unpleasant confrontation occurs.

On a recent flight from Stockholm to New York, my seatmate decided to test the bounds of both personal distance and protein bar consumption.

Much like a magician tugging an endless rainbow scarf from his cuff, this passenger managed to produce a string of Luna Bars from some unknown place. Eight hours and twenty two minutes of Luna Bars, manspreading his arms like a proud pterodactyl, hairy elbows grazing my face. How did he not feel that my face was against his elbow? What was wrong with this person?

Rather than say anything, I quietly dodged each jab of the elbow. Afterall, I was in the window seat, and this man was in the middle. I wanted to seem sympathetic. But he continued to invade my space with his chalky protein bars, completely disregarding the armrest border between us.

At a certain point, I could take no more. We’d already been elbow-to-face, so it seemed entirely in line to gently fold his elbow down and gesture with the edge of my palm at the armrest. We didn’t share a language, but the miming seemed effective in communicating the point that he was in prohibited airspace here.

So until everyone catches on to the basic rules of the armrest, including air rights, you too may be forced to hold your ground against an upper-body manspreader. If so, very politely make mention of it to your seatmate and hope they are receptive. If additional, more assertive, comments don’t do the trick, you’re better off asking a flight attendant to mediate.

Above image by Surachet Jo via Shutterstock