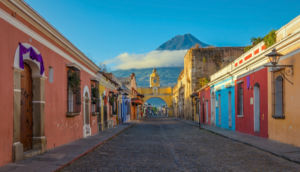 25 New Routes on Frontier Including Guatemala and El Salvador

Frontier Airlines has announced a major expansion by adding 25 new routes for spring/summer 2020 travel — including 2 new countries to its route map, El Salvador and Guatemala. The airline is also expanding to new destinations in the Dominican Republic and will start several new flights to/from Newark, Miami, San Juan, and Ontario Airport in the LA Area. Intro fares are as low as $29 one-way or $57 roundtrip on domestic flights and $148 roundtrip for international travel.

The new route announcements come in conjunction with Frontier extending its booking schedule for travel through August 9, 2020. Frontier had previously announced its plans to expand out of Newark (EWR) when it first announced service to the airport earlier this year and the only change in the previously planned routes is that it switched airports in the D.R. Frontier chose to fly from Newark to the two major cities, Santiago (STI) and Santo Domingo (SDQ), rather than the tourist destination Punta Cana. In total, 9 new routes will be added from Newark, bringing Frontier's number of destinations served from Newark to 16.

The routes that may come as a surprise are Frontier's 3 new routes into San Salvador (SAL) and 2 new routes to Guatemala (GUA). Low-cost service to these destinations is limited and Frontier has a unique opportunity to capitalize on its partnership with Volaris to provide cheap flights to Central America from more cities.

"We recognize the demand for affordable air travel in these communities and are proud to bring our brand of 'Low Fares Done Right' to these sought-after destinations," Daniel Shurz, senior vice president of commercial for Frontier Airlines, said in a press release.

Frontier is also providing the first nonstop flight on an ultra-low-cost carrier between the LA and New York metro areas with its new nonstop service between Newark and Ontario Airport included in this expansion. In addition, the airline is adding 4 other routes out of Ontario (ONT) and will expand its presence in Miami (MIA) with 8 new flights, and in San Juan (SJU) with 4 new flights.

All of these routes will likely see even lower prices on all airlines thanks to the added competition. Sign up for FREE airfare alerts to find out when prices drop.

All domestic fares also work in the reverse direction

Discount Den member fares are slightly less than standard fares. Frontier also offers the Works bundle, which can be added to any flight during the initial booking. It includes a standard carry-on bag plus a personal item, one free checked bag, seat selection (including stretch seating), priority boarding, flight flexibility, and refundability. This is a value if you want all of these amenities, but chances are you can get away with just adding what you need a la carte for cheaper. It's worth noting that Frontier seems to have increased its online booking fee (carrier interface charge) up to $42 roundtrip. Save this fee by booking at an airport counter.