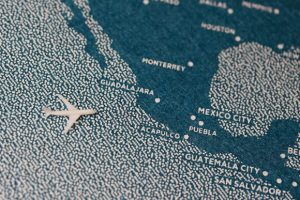 Initially announced in January, the codeshare agreement between Mexico's Volaris and Denver-based Frontier Airlines has cleared all the bureaucratic hurdles. The two airlines began selling interlined tickets earlier this month. This arrangement is an industry first for two uniquely branded ultra-low-cost-carriers, allowing ticketing and connecting itineraries across both route networks.

Volaris is Mexico's second-biggest airline after flag-carrier Aeroméxico and has a network of over 40 destinations within Mexico, of which half will now link up directly to Frontier’s operations. According to Volaris CEO Enrique Beltranena "Our code-sharing sales start marks a milestone in the history of our operation. Our Customers and those of Frontier can purchase their tickets with the shared promise of maintaining the lowest rates, the best Customer Service and the highest standards of safety and quality."  It should also be noted that private equity firm Indigo Partners holds a significant stake in both Frontier and Volaris amongst several other ULCCs, which certainly was a major factor in this codeshare collaboration.

What This Means for U.S. Customers

The success of ultra-low-cost carriers in the States has reshaped fare structures and left the traditional legacy carriers scrambling to reinvent old pricing models. While the fees and gotcha tactics from some ULCC’s rankle many customers, there is no doubt that they have set the tone on many point-to-point routes in America. That's why we've seen the drastic expansion of basic economy fares offered by carriers like Delta, American, and United to compete in markets supported by no-frills companies like Spirit and Frontier.

This low-cost carrier effect can already be seen in U.S. markets like Chicago (ORD), Denver (DEN), and Ft. Lauderdale (FLL) where prices to Mexican hotspots like Cancun (CUN) and Los Cabos (SJD) often dip down around the $200 roundtrip price range. Close to a hundred dollars less than what was being sold only a few years ago.

This is a highlight that Frontier’s CEO Barry Biffle focused on during the announcement of the codeshare agreement: “Many customers traveling between the U.S. and Mexico are forced to pay high fares to fly, and this agreement will provide lower fares to a vast majority of the U.S. and Mexico population. As the leading ultra-low-cost carrier in Mexico, Volaris is an ideal partner with which to align, and we look forward to working together to deliver low fares to millions of people." The initial rollout of Frontier-Volaris codeshare flights offered around 20 routes south of the border, but more schedules were added last weekend. When seasonal and daily flight schedules firm up, the combined network should expand to over 100 destinations including flights onward to Central American and Caribbean airports.

As of this post, the following destinations throughout Mexico can now be purchased directly on either the Frontier or Volaris websites:

While customers may not see immediate price drops between the U.S. and Mexico, the Volaris and Frontier codeshare will undoubtedly bring expanded service and competitive airfares to some of Mexico’s smaller markets. The agreement alone will make ticketing and connections easier for customers who book with either airline. Additionally, the streamlined partnership will also benefit travelers who check bags and provide extra flight options in cases of cancelations or delays.

What interests me most about this industry-first ULCC codeshare is that, if successful, it may lead the way for other low-cost carriers based in North America, like Canada’s newly introduced Swoop or Mexico’s VivaAerobus, to bolster networks with other U.S. based no-frills carriers. This could potentially allow flights within North America to mimic those rock-bottom international prices we often see offered by European airlines like Ryanair and EasyJet.

While the FAA and neighboring airline agencies have a while to go to catch up to the EU’s flight regulations, mostly regarding imposed governmental taxes on tickets and compensations, the growth and partnership of ULCC’s across neighboring borders should bring some much needed healthy competition to the overpriced North American market.