When flying to or from the San Francisco Bay Area, you’ve got a few different airports to choose from so don’t simply type in “San Francisco” or “SFO” into the flight search engine or you may be missing out on a better deal.

Depending on which airline you prefer to fly, where you’re traveling to, and which ground transportation option you prefer, other airports in the area such as Oakland Airport (OAK) or San Jose (SJC) may better suit your needs.

You’ll find low-cost flights available at all three San Francisco Bay Area airports, but each airport hosts different airlines and route options. Here’s a breakdown of all three major airports in the region and how they compare. San Francisco’s SFO airport is the largest airport in the region and also the closest to downtown San Fran, just 13 miles south and right along the San Francisco Bay. Its location also means the airport is prone to foggy skies and weather delays are more frequent at SFO than other nearby airports.

United Airlines dominates the market share at SFO with nonstop flights to several regions of the U.S. and around the world. Alaska Airlines also uses SFO as a hub since it took over Virgin America flights in 2018. There is a limited amount of flights on ultra-low-cost carriers Frontier and Sun Country, which keeps fares low in certain markets. And the major carriers often compete on price with low-cost routes flown from other area airports.

If you are traveling internationally, SFO will likely be your best bet with nonstop flights available throughout the world including Canada, Mexico, Central America, Europe, Middle East, Asia, Australia, New Zealand, and the Pacific Islands. It’s a major U.S. gateway for several international carriers based in Asia and is one of United’s major hub cities that connects travelers throughout its international network.

It’s best to use SFO if you’re planning to stay close to the Golden Gate Bridge in downtown San Francisco or for visits to Alcatraz, but you may want to consider another airport if you wish to visit Silicon Valley or Napa on the other side of the bay. Even so, since SFO has more nonstop flight options than the other two major airports in the region, you may find better schedules flying into SFO – even if that does mean crossing the bay to get to wine country.

SFO is a hub for which airlines?

How much does it cost to get from SFO to downtown San Francisco?

Getting between downtown and SFO is a breeze on the Bay Area Rapid Transit (BART) system. A free AirTrain connects the terminals to the San Francisco International Airport BART station where trains run to downtown San Francisco 3-4 times per hour. Board an Antioch bound yellow line train and you’ll be in downtown SF in around 30 minutes for just under $10. BART trains run until midnight daily, starting at 5am on weekdays, 6am on Saturdays, and 8am on Sundays.

Many prefer the ease of door-to-door transportation and taking a taxi from SFO is the easiest way to exit the airport. Simply look for the designated taxi zones located at the center islands on the Arrivals level. All taxis are metered and it will cost around $50 to get downtown from SFO. Traffic can sometimes make this a longer journey than the train, but it should normally take around 30 minutes.

A slightly cheaper way to get a private ride from the airport is to utilize a rideshare app such as Uber, Lyft, or Wingz. Fares range between $30-$35 to downtown SF and you’ll find pickup locations on level 5 of the domestic parking garage for Terminals 1-3. If you are at the International Terminal 4, rides are picked up curbside at the center island of the Departures level.

If you want a door-to-door shuttle and don’t mind sharing the ride, there are many different shuttle companies offering service to/from SFO. The largest company is Super Shuttle, which offers shuttles for around $19 per person to downtown SF. This mode of transport can sometimes take up to 90 minutes depending on where you are on the drop-off list.

There are also several regional busses that operate between SFO and other locations around the Bay Area. A few examples include the Marin Airporter serving Marin County, the Davis Airporter serving UC Davis, Evans Airport Shuttle serving Napa, and the Sonoma County Airport Express. 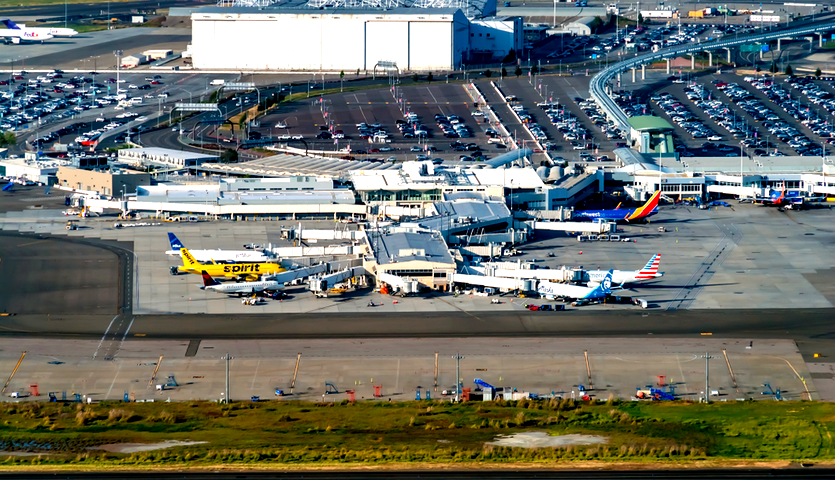 For those in the East Bay, Oakland is the go-to airport. It can sometimes be worth it to take a connecting flight rather than deal with traffic on the Bay Bridge in order to get to San Francisco’s airport. If you’re having trouble finding nonstop flights to or from Oakland, don’t forget to check Southwest Airlines. Although Southwest doesn’t technically operate hubs, Oakland (OAK) is about as close as it gets to hub city status for Southwest. The airline famous for its two free checked bags and no change fee policy flies to the most destinations and, by far, carries the most passengers in and out of Oakland International Airport.

New Southwest service to Hawaii may bring some travelers from across the bay to fly from Oakland. Flights to Hawaii are competitive from all three Bay Area airports and Oakland is the best to fly through if you are looking to connect from elsewhere around the country on Southwest. Alaska Airlines and Hawaiian Airlines also have nonstop service between Oakland and Hawaii.

Ultra-low-cost carrier Allegiant Airlines calls Oakland a “focus city” with limited service to a few cities around the U.S., but Spirit Airlines actually carries more passengers in larger planes if you’re looking for another budget option at OAK.

International flights from Oakland are limited. Level once had low-cost service to Europe, but has since moved its operations to SFO. Norwegian has also moved one of its flights to SFO, but it remains the main connection between Oakland International Airport and Europe with nonstop service to a handful of European cities. Most international service from Oakland is to Mexico on Aeromexico, Southwest, or Volaris.

It’s best to fly into Oakland if you are looking to visit downtown Oakland, Berkeley, or anywhere in the East Bay. It’s also the closest of the 3 major Bay Area airports to Napa Valley so it can be your gateway to tasting some of the best wines of the world.

OAK is a hub for which airlines?

How much does it cost to get from OAK to downtown San Francisco or downtown Oakland?

It’s slightly more complicated to use public transportation at Oakland Airport than in San Francisco, but it’s still easy and is a very affordable way to get between the city and the airport. Upon arrival, take a BART train from OAK to Coliseum Station where you will transfer to a different train depending on your destination. For Oakland, take a Richmond bound orange line train, and for San Francisco, take a Daly City bound train on either the green or blue line trains. The half-hour trip costs around $9 to Oakland and it’ll be around 45 minutes to San Francisco for $11.

Taxi service from Oakland Airport can range in price and time due to varying traffic conditions. If you’re heading across the Bay Bridge to San Fran, it can take up to an hour or more and will usually cost around $70, but the meter can sometimes reach near $100 depending on your final destination and traffic. Taxi service to Oakland is less prone to major traffic delays, but it still can happen. A taxi should take about 20-30 minutes and cost around $40 to downtown Oakland.

Rideshare service such as Uber, Lyft, and Wingz, pick up at the third curb of the Arrivals level. It’s a cheaper way to hail a private ride at the airport with fares around $20 to Oakland and $50 to San Francisco. Of course, prices will vary by distance and surge pricing can take effect if there are limited drivers available.

As with SFO airport, there are several shuttle bus companies offering service to/from Oakland Airport. A spot search on Super Shuttle didn’t allow me to book a shared ride van so this service may be limited to private shuttles at OAK. For a complete list of shuttles operating out of Oakland Airport, click on the “door to door shuttle service” drop-down on this link to the Oakland Airport’s ground transportation page. 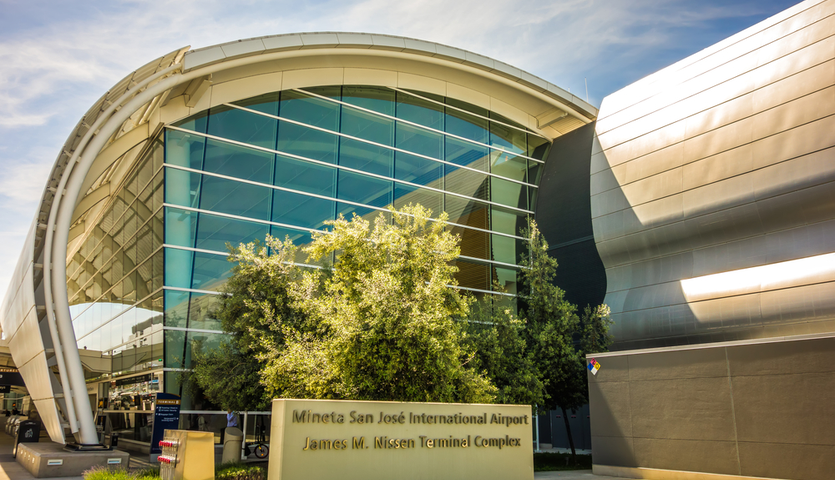 Last but not least, Norman Y. Mineta San Jose International Airport (SJC) is another option when flying to or from the Bay Area. The airport is named after former Transportation Secretary and San Jose native, Norman Mineta. It’s one of the fastest growing U.S. airports and is now the second busiest Bay Area airport, behind SFO, in terms of number of passengers.

San Jose Airport isn’t a hub for any airline, but Southwest and Alaska Airlines both call it a “focus city” and carry the most passengers. Other carriers offer service to hub cities around the country. As with the other Bay Area airports, nonstop service is available to all of the Hawaiian Islands, and like Oakland, Southwest now offers flights to Hawaii from San Jose. The only true budget carriers flying out of San Jose are Frontier and Volaris, which both have limited service.

SJC is a hub for which airlines?

Unfortunately, BART does not extend all the way down to San Jose so public transportation options to/from San Jose are limited. Fortunately, the airport is extremely close to downtown San Jose and an Uber or taxi will be fairly cheap and quick. Getting from San Jose Airport to San Francisco is another story.

If you prefer to take public transport, it’s only $2.50 to downtown San Jose. Take the Valley Transportation Authority (VTA) Airport Flyer bus number 10 eastbound from the airport and transfer to the light rail at the Metro/Airport stop. Board a Santa Teresa bound blue line or Winchester bound green line light rail train and get off at Santa Clara station for downtown San Jose.

It will be a journey to travel between San Jose Airport and downtown San Francisco, but it is still fairly cheap if you take public transportation. Take the VTA Flyer bus 10 westbound to the Santa Clara Transit Center where you will transfer to the Caltrain. It’s about a 1.5-hour ride on the train so it could take close to 2 hours of total travel time by public transportation, but it will only cost around $13 total.

Taxis and App-based rides are basically the same price ($12-$20) on the short 10-minute ride between San Jose Airport and downtown San Jose, but you’ll usually save quite a bit by taking a Lyft, Uber, or Wingz ride if you are traveling between SJC and downtown SF. It can cost up to $150 in a taxi or $70-$80 if you hail a ride with your phone. Rideshare pickups are curbside at stop 1 in Terminal A Arrivals or at the ground transportation island stops 8 & 9 in Terminal B. It will typically take 1-2 hours to travel by road from San Jose to San Francisco, depending on traffic, which can be horrendous along this busy corridor.

For shuttle services to/from San Jose Airport, visit the door-to-door shuttles section of the airport website. Prices range depending on company and destination. 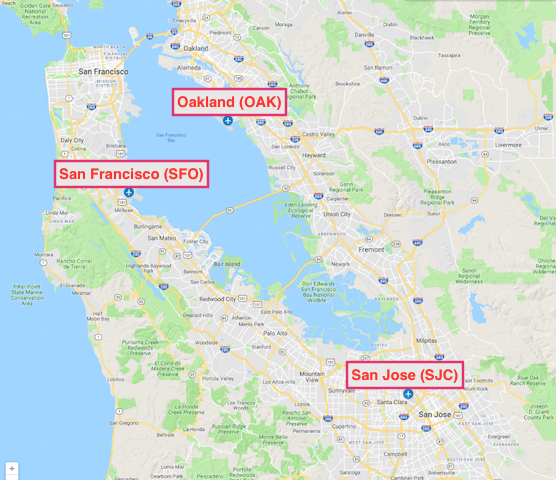