Last week, Frontier Airlines announced 4 new routes to Phoenix (PHX) and one new route to Sarasota (SRQ) that are set to begin in the fall. Earlier this week, 4 new nonstop flights to Miami (MIA) were announced. In total, 9 new routes were added in the last two weeks and fares on the new routes are as low as $77 roundtrip.

The new routes all begin either November 14 or 15, 2019, and have varied frequencies depending on the route. Frontier had previously flown some of these routes in the past, but more than half are brand new nonstop flights for Frontier Airlines.

With the added competition, prices for flights to and from Phoenix (PHX) and Miami (MIA) will likely drop even more on all airlines. Sign up for fare alerts to find out when they do.

Intro fares are available from mid-November through early March. Certain routes may only have low fares available in limited months.

Peak holiday travel around Thanksgiving, Christmas, New Year's, and late February break will have higher fares, but you may still find a relative deal compared to other carriers.

Travel days for the lowest fares vary depending on the route. Click on the fare details below for more info.

Intro fares to/from Miami are advertised to expire at 11:59 pm ET, July 25, 2019. All other fares are unadvertised and are subject to change at any time.

All fares also work in the reverse direction. Note: Many routes with limited frequencies only fly on Tuesdays and Wednesdays during peak holiday periods.

Discount Den member fares are slightly less. Membership costs $59.99/year and comes with a few other perks. Frontier also offers the Works bundle, which can be added to any flight during the initial booking. It includes a standard carry-on bag plus a personal item, one free checked bag, seat selection (including stretch seating), priority boarding, flight flexibility, and refundability. This is a value if you want all of these amenities, but chances are you can get away with just adding what you need a la carte for cheaper.

Searching Frontier's site, I found flights departing Hartford BDL on Sunday, December 8, returning from Miami MIA on Thursday, December 12, for $117 roundtrip. And if you're near the airport today, you can save $38 per ticket (carrier interface charge) by booking at an airport counter. 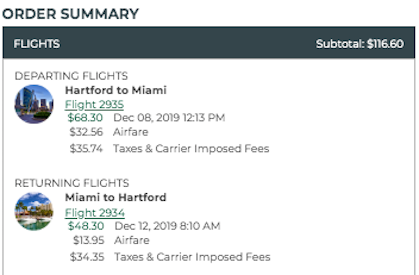