Last week, Frontier Airlines announced 4 new routes out of Cincinnati (CVG)—three of them to Florida—and just yesterday, Frontier started selling tickets on 7 new nonstop flights to Las Vegas (LAS) and 2 new routes from Cleveland (CLE) to Florida. Flights start this fall and intro fares are as low as $29 one-way or $57 roundtrip.

New routes to and from Las Vegas include Los Angeles (LAX), Miami (MIA), Portland (PDX), Phoenix (PHX), Reno (RNO), Seattle (SEA), and Orange County (SNA). In addition to the new Vegas routes, Frontier is adding new flights from both Cincinnati and Cleveland to Ft. Lauderdale (FLL) and Miami (MIA), and from Cincinnati to Sarasota (SRQ) and New Orleans (MSY).

The new Frontier flights to Vegas will compete directly with America's other big ultra-low-cost carrier, Spirit Airlines, on several routes. Travelers from the LA area will now have a choice of 9 airlines flying nonstop between LAX and Las Vegas—and up to 11 if you include surrounding airports like Burbank and Long Beach.

Prices for flights to Vegas and Florida will likely drop even more on all airlines. Sign up for fare alerts to find out when they do.

Intro fares are available on FlyFrontier.com from the service start date through December 14, 2019. Peak Thanksgiving week travel is blacked out between November 22 - December 2.

Travel days vary depending on the route. Click on the fare details below for more info.

Cincinnati to Ft. Lauderdale $397 roundtrip - cheaper on other airlines

Discount Den member fares are slightly less. Membership costs $59.99/year and comes with a few other perks. Frontier also offers the Works bundle, which can be added to any flight during the initial booking. It includes a standard carry-on bag plus a personal item, one free checked bag, seat selection (including stretch seating), priority boarding, flight flexibility, and refundability. This is a value if you want all of these amenities, but chances are you can get away with just adding what you need a la carte for cheaper.

Searching Frontier's site, I found flights departing Phoenix PHX on Tuesday, September 17, returning from Las Vegas LAS on Wednesday, September 18, for $57 roundtrip. Longer trips are also available. And if you're near the airport today, you can save $20 per ticket (carrier interface charge) by booking at an airport counter. 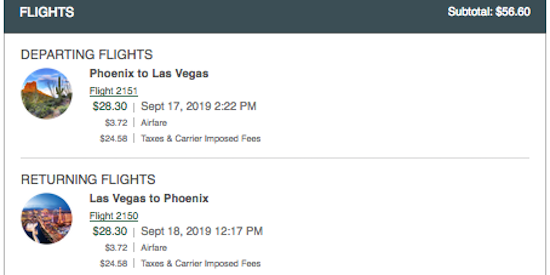