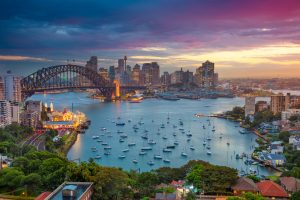 The Surprisingly Cheap Flights You're Probably Not Booking

When it comes to airfares, the distance flown doesn’t necessarily correlate with the price you pay. As you've probably noticed when shopping around, it can sometimes cost hundreds more to fly to a neighboring state than it does to cross an ocean. That may seem totally nonsensical, but there are several variables at play when routes are priced, the biggest one being competition.

Thanks to changes in the marketplace, the destinations below are much cheaper than one might suspect.

Flights to Sydney, Melbourne, and other Australian cities

In years past, anyone headed to Australia could expect to spend around $1,500 roundtrip on a seat Down Under. At least, that was the norm up until recently. Fares have dropped by about a third, sometimes even less, thanks to increased competition and advances in fuel-efficient aircraft.

Usually, it’s been the West Coast cities that get all the deals to Oz, but these super low $400+ fares have been available from hub cities nationwide. These unadvertised sale fares have become a fairly regular thing by now (there was one earlier this week, in fact!), with availability throughout the year, even peak season. If you’ve had Australia on your to-do list, now’s your chance.

Flights to Barcelona, Madrid, and elsewhere in Spain

Demand is always high for Spain’s sunny cities, and there’s certainly no shortage of affordable flights from the US. Fares have remained consistently low throughout the year, with unadvertised sales that seem to pop up every few weeks.

How cheap are we talking here? Earlier this week, we found fares between New York and Madrid for $286 roundtrip. That’s cheaper than many domestic tickets. Even smaller cities such as Valencia, Malaga, Seville, Las Palmas, and Tenerife can be found for under $450.

Many of these price drops have come courtesy of TAP Air Portugal. And as we’ve mentioned before, TAP allows for free stopovers in either Portugal and Porto. So you can squeeze in two cities for the price of one.

Spain is also serviced by a number of low-cost carriers, including LEVEL, which flies nonstop between Barcelona and Boston, New York, San Francisco, and nonstop via Norwegian from Chicago, Los Angeles, Oakland, and New York.

Here’s a look at current fares to Barcelona, Madrid, Seville, Malaga, and Valencia from all over the U.S. and Canada.

Flights to Milan, Rome, Palermo, Catania, and other cities in Italy

Italy has always skewed towards expensive, but fares have fallen in the last several years. Again, increased competition has helped to drive fares down. You may recall how riled up U.S. legacy carriers got when Emirates entered the market with its fifth-freedom nonstop service between New York and Milan.

Now fares to Milan can easily go for under $400 roundtrip, with one carrier trying to match or undercut the other.

Elsewhere in Italy, Norwegian has helped to make Rome flights more affordable with its nonstop service from Newark, Los Angeles, and Oakland.

Here’s a look at current fares to Rome, Milan, Palermo, Catania, Cagliari, and Naples from all over the U.S. and Canada.

Flights to Shanghai, Beijing, Hong Kong, Guangzhou, Xi’an, and other cities in China

If China hasn’t been on your vacation radar, it might be after you realize just how cheap the flights can be. It’s not unusual to find a $400 roundtrip and below from many major U.S. cities, and not just on the West Coast. Generally, you’ll find the lowest fares on airlines like Hainan, China Southern, China Eastern, and Xiamen, with U.S. legacy carriers occasionally matching or at least coming pretty close.

Here’s a look at current fares to Shanghai, Beijing, Hong Kong, and Guangzhou from all over the U.S. and Canada.

While not as consistently low as some of the other destinations on the list, Athens is much cheaper to reach than it once was, especially in shoulder season when fares can go below $400 roundtrip. As with Milan, Emirates had a hand in this sudden drop when it introduced nonstop service from New York. Norwegian is also set to begin its nonstop service from New York’s JFK this July, and introductory fares were going for $159 one-way.

Here’s a look at current fares to Athens from all over the U.S. and Canada.