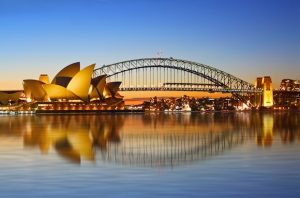 Nationwide Sale to Australia from $459+ Roundtrip

Fares to Australia keep dropping and have now dipped into the $400s roundtrip from multiple cities across the U.S. and in the $500s from nearly every airport in the nation where United flies to both Sydney (SYD) and Melbourne (MEL). Flights to other Australian cities are lower than usual as well.

These lower fares can be found when searching on certain third-party websites such as Priceline. Fares will be slightly higher if you book directly on the airline's website.

Travel rules vary slightly by route. The lower fares in the $400s from certain hub cities are available for daily travel on scattered dates departing the U.S. through October.

For other cities, travel is valid on Mondays, Tuesdays, Wednesdays, and Thursdays, with departures from the U.S. through early July, in August/September, and November. These routes also require a 10-night minimum stay and a 14-day advanced purchase.

This sale is unadvertised and prices may jump at any time. Book your dream trip to Oz now.

This is just a small sample of fares. As this is nationwide, check flights from your city (large or small) even if it isn't listed, and you'll likely find a great price on a flight to Australia using the date range and rules listed above.

Unfortunately, some of the major Delta hubs are not included in this sale, but you may find a nearby airport with a low fare.

As an example, when searching on Priceline, I found seats departing Philadelphia PHL on Monday, March 4, returning from Sydney SYD on Tuesday, March 19, for $459 roundtrip.