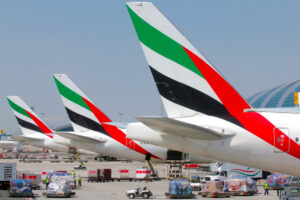 Way back in 1944 when commercial flight was beginning to open up on an international scale, there needed to be some standardized rules put in place regarding the “Freedoms of the Air.”

A meeting known as the Chicago Convention was called to coordinate international air travel and a numbered list of Freedoms, which now tallies nine, was created. These freedoms outline basic rights like airspace and operating regulations, and one, in particular, seems to garner the most controversy and attention.

The fifth airline freedom allows a carrier to fly between two separate foreign countries as long as the flight originates or terminates in the carrier’s home country. These routes, often called add-on or tag flights, permit an airline to sell tickets on standalone city-to-city routes in countries that they otherwise wouldn’t be able to operate in.

As an example, Singapore Airlines operates a flight from Houston (IAH) to Singapore (SIN) that heads eastward with a brief stop in Manchester, UK (MAN). With fifth freedom rights, a passenger can fly only the Houston to Manchester segment of that flight with no need to travel onward to Singapore.

Why You Should Care About Fifth Freedom Flights

As in the Singapore Airlines example above, fifth freedom flights enable you to try a new carrier and also give customers more flight options to choose from. In many cases, these carriers offer better products, departure times, and overall service than their U.S. based competitors on these routes. Especially in instances, where you can choose an airline like Singapore or Emirates who regularly top the best airline awards over a local carrier's offering.

When all prices are equal, I know I’d much rather fly from New York (JFK) to Frankfurt (FRA) on a Singapore Airlines A380 with top-notch service and free-checked baggage than a Delta plane on the same route with less legroom and a $60 one-way fee for a piece of checked luggage.

Fifth freedom routes can also connect underserved markets, like the previously mentioned Houston to Manchester flight. Before Singapore introduced the service there was no other option to fly between the two cities without a connection.

Similarly, Emirates began offering a year-round nonstop option from Newark (EWR) to Athens (ATH) last year, before continuing to its base in Dubai (DXB). Home to a large Greek population, Emirates saw an opportunity in the New York/New Jersey market and exercised its fifth freedom rights to start service on the route, much to United Airline's chagrin. While the Emirates move drew the ire from some U.S. based airline higher-ups, it also provided customers with a new connectionless option and has brought healthy competition into the market where United routinely calls the shots. Now, flights to Athens are hundreds of dollars less on average than what was being listed several years ago.

For frequent flyers and travelers with stacks of airline miles in their accounts, fifth freedom flights can also serve as an attractive redemption option. In some instances, flying on these routes will you not only get better service, but you'll be able to find "sweet spots" and availability when redeeming miles with partner airlines of the fifth freedom carrier; costing fewer miles for a better award value and an in-flight experience.

Related: These Are the Best Travel Rewards Credit Cards for 2020

Here’s a current list of all the fifth freedom flights served by international carriers on U.S. routes that customers should take note of. Most of these routes depart/arrive in major airports, as they offer the best options for the fifth freedom operating airline to pick up and offload more customers before continuing onward to the next destination.

There are a few loopholes and country classifications that make these routes not quite fifth freedom flights. As an example, since Tahiti, Martinique, and Guadeloupe are considered overseas regions/collectives of France, they follow the same European Union guidelines on fifth-freedom classification. Meaning, Air France or any other EU member-based airline like Norwegian can fly to them freely.

Similarly with LOT, despite being Polish airline, there has been a lack of nonstop options to North America from neighboring Hungary. So the airline set up shop in Budapest to offer service on these new transatlantic routes, which is completely allowed under the Open Skies agreement.

For all intents and purposes, these routes offer all the same benefits and options as fifth freedom flights, but sticklers like to single them out. Imagine if you told a friend that you were flying from Los Angeles to “somewhere” in France, and then sent them a picture of you in scuba gear on the beach in Papeete. Technically you kind of did since Tahiti is considered French soil and governed by EU flight regulations. Which is similar logic with these sort of fifth freedom operated flights below: