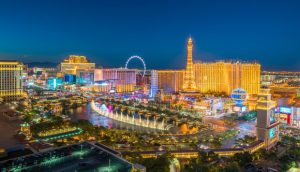 Sun Country Expands in Vegas and Adds a New City

More new routes are on the horizon for Sun Country Airlines. Six new nonstop routes in total are being added with a focus on more flights to Las Vegas (LAS), including from a brand new Sun Country city in Redmond (RDM). Intro fares start from $137 roundtrip.

The new routes are set to begin this fall in either September or October. With this announcement, Sun Country has also extended its feature fares sale through April 15, 2019, and has added some more routes to the sale.

New service begins either September 5, 6, or October 3, 2019. Intro fares are valid for travel through mid-December. These routes are only flown on a few days each week so be sure to click on the fare details below for specifics.

As an example, I found seats departing Redmond RDM on Thursday, October 31, returning from Las Vegas LAS on Sunday, November 3, for $137 roundtrip. Perfect for a Halloween trip to Vegas!