Airfares change daily, which is why we’re always on the hunt to help you grab the best-priced deals out there. Following is a list of the top 10 fares that we deal hounds have sniffed-out so far this Monday. Alongside China Southern’s fantastic fare deals to Southeast Asia, the airline is also posting some incredible deals to destinations all across China too. Want to see the famous Terracotta Army in person? Here’s your chance to do so at less than $400! Travel from New York-JFK to Xi’an China for only $379 roundtrip this fall. Departures are available daily through the end of September with returns available into October. I was able to find an itinerary at this price point departing JFK on Friday, September 20 and returning from XIY on Saturday, October 5, 2019.

See all of our fares to Xi’an (XIY) from all over the U.S. and Canada. 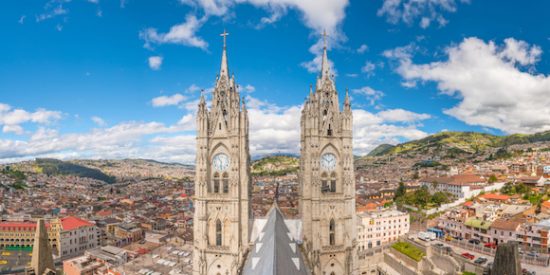 Fly from Los Angeles to Quito, Ecuador for $395 roundtrip on Copa Airlines this spring or fall. This deal has a pretty large travel window from early April through mid-June then again from early September through November with departures valid any day of the week. Most itineraries will have short connections in Panama City, but some may require a longer stop, but those are mostly avoidable. As an example, I found tickets at this price departing LAX on Friday, May 10, and returning from UIO on Saturday, May 18, 2019. As long as TAP Air Portugal's fantastic fares to Spain are still available, we'll keep them coming, as they're the best-priced deals across the pond. The airline has a robust network in Spain, and you'll find many sale fares to destinations that other carriers don't reach. Like this deal, for example, fly from Chicago-ORD to Valencia for $437 roundtrip in late summer and fall. Departures are available most days starting in late August through early December then into 2020 after the holiday season. TAP Air Portugal allows for free stopovers along the way so you can really make out with these fare deals if you turn your trip into a 2-for-1 and explore lively Lisbon along the way. As an example, I found seats departing ORD on Sunday, August 25 and returning from VLC on Tuesday, September 3, 2019. Perfect for that last summertime getaway over Labor Day.

See all of our fares to Valencia (VLC) from all over the U.S. and Canada. Southwest Airlines is back with their latest 4-day spring sale, and we're seeing a nice price drop on many routes. Take this for example, if you want to fly nonstop from Pittsburgh to Tampa, Southwest is your only option. With two bags and a direct connection, $190 roundtrip is hard to beat! Tickets at this price are available Tuesdays, Wednesdays, and Saturdays from early April through June 12, 2019. On Southwest's site, I found seats available departing PIT on Wednesday, May 1, and returning from TPA on Tuesday, May 7, 2019. No passport needed! Fly from Boston to St. Thomas, USVI for $276 roundtrip on American Airlines. Flights to the island territory are available for departures on select dates in April. Seats are available Monday through Thursday, and as an example, I found flights departing BOS on Tuesday, April 9 and returning from STT on Monday, April 15, 2019. Here’s a nice price drop on this route. It’s about $30 less than what we’ve previously posted in the past. Travel nonstop from Houston-IAH to Guatemala City for $141 roundtrip on United this spring. Looking for a last minute getaway? Tickets at this price are available for departures beginning as soon as tomorrow! Daily flights are available through May 14th at this price; however, April dates are selling out fast, and seats are limited. Searching United's site, I found an itinerary departing IAH on Saturday, April 27 with a return flight available from GUA on Thursday, May 2, 2019.

See all of our fares to Guatemala City (GUA) from all over the U.S. and Canada. Fly nonstop from Long Beach to Austin for $97 roundtrip on JetBlue this summer. Flights are selling out fast on this route, but there are still some scattered dates left. If you’re looking for a Labor Day escape, I was able to find seats still available departing LGB on Wednesday, August 28 with a return flight from AUS on Tuesday, September 3, 2019. Your best bet with this fare is to search for one-ways listed at $49 and piece together an itinerary from there, if your exact dates aren't available, try returning or departing from nearby LAX. Head to Grand Cayman year-round with this deal from Cayman Airways. Nonstop flights are available for $216 roundtrip departing Miami almost every day of the year as long as you book two-weeks out. That means Christmas, peak summer, weekends, you name it is available at this amazing price point. American Airlines is also price matching so you can choose to fly with them if you prefer, but they don’t seem to price match during the peak travel periods, so I’d recommend booking with Cayman Airways. As an example of holiday availability, I found seats over the Christmas break departing MIA on Sunday, December 22 and returning from GCM on Saturday, December 28, 2019, if you want to go somewhere different during the holiday season. Beaches and breweries are two things that San Diego does better than most cities in the country. If you’re a fan of either you don’t want to miss out on this fare from Alaska Airlines. Fly nonstop from Kansas City to San Diego for $177 roundtrip this spring and get your surf and suds on. Fares at this price are available on Tuesdays, Wednesdays, and Saturdays from early April through May 21, 2019. If you’re looking for sample dates, I found seats departing MCI on Wednesday, May 1 with a return flight from SAN on Tuesday, May 7, 2019. Saturday departures are selling out quickly, so get a move on.

When it comes to domestic travel its tough to beat JetBlue on service and prices, so here's another airfare deal from the carrier for you to have a look at. Fly nonstop from Nashville to Ft. Lauderdale for $128 roundtrip this April or May. Travel dates are hard to pin down as each week varies with travel dates, but you should be able to find availability if you have a flexible travel calendar. On JetBlue's website, I found tickets at this price departing BNA on Wednesday, May 8 and returning from FLL on Sunday, May 12, 2019.