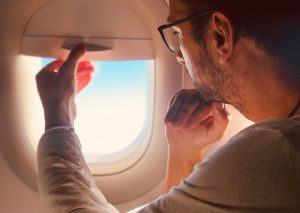 Can a Flight Attendant Force You to Close the Window Shade?

A reader recently sent in an intriguing question. The email, edited for length, detailed the circumstances of a dispute between him and the flight crew on a long flight.

"After dinner," he writes, "a flight attendant demanded that I pull the window shade. It was a beautiful star-studded sky with clouds below and it was at least five hours before sunrise. There was 'no harm; no foul.' [Passengers] who sit by the window do so for the psychological relief the window view provides them. 'That's what windows are for,' I said to the flight attendant. Her response was, 'This is the policy so that passengers can sleep.' And I replied, 'This is not bothering them, it's night time.' But she insisted. So the end result was the place was sealed up like a tomb, with television screens and iPods flashing all over the place."

Here's what I can tell you. No federal rules govern the use of window shades during a flight. For safety reasons, airlines require that windows be open during takeoff and landing. Beyond those brief periods, however, each airline sets its own policy. And because no airline contracts of carriage say anything about window shades, establishing the "policy" often devolves to individual flight attendants.

If you've flown recently, this story probably doesn't come as much of a surprise. My recent experience is that even on long daytime flights when hardly anyone is trying to sleep, flight attendants still try to get everyone to pull down the shades immediately after takeoff.

My experience has also been that the person at the window seat is generally in control. If he or she wants to keep the window shade open, it stays open, although the passenger may be expected to lower the shade partially.

Related: Use These Tips to Secure an Empty Seat Beside You on Your Next Flight

I have three suggestions for passengers facing a window shade dilemma:

First, if you're in a window seat, try to retain control of the window shade—but don't make a scene out of it if the attendant asks you to close your shade.

Second, if you prefer to sleep, keep a good eyeshade in your carry-on bag.

And third, if you're interested in looking out the window regardless, try to fly on a Boeing 787 Dreamliner. Instead of pull-down shades, these planes have windows that darken electronically. The darkest they get blocks only about 90 percent of the light, leaving enough to let you look out even in a dark cabin.

Have you experienced a situation like the one described by this reader? How do you resolve conflicts with the flight crew or other passengers? Share your comments in the space below.

Related: Passenger Etiquette: The Basic Rules of the Armrest

Read the original: Can a Flight Attendant Force You to Close the Window Shade? by Ed Perkins. This story was updated by Ricky Radka.