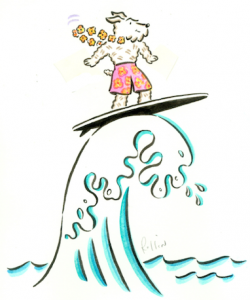 Any savvy traveler knows that low airfare is only the beginning. The real work? That starts when you touch down in your destination. In some cities, the cost of getting in and out of town can rival what you paid for the flight that brought you there. In other destinations, simply navigating the airport can take enough time, you’d spend any amount of money to not have to deal with the hassle.

That’s why we’re taking a break from telling you about low fares to talk to you about airports. Like, how to get in, how to get out, how to survive a long layover – even how to have a little fun. This week, we’re flying to Honolulu. Hop on board!

Welcome to paradise! Enjoy the traffic. The worst in the United States, actually, according to a recent survey. It’s estimated that Honolulu commuters spent an average of 58 hours sitting in their cars going nowhere this past year – that’s more than New York, Los Angeles and Chicago. Hardly surprising, when you look at the woeful state of public transportation on this crowded little island. Those who require modern conveniences such as speedy, efficient transit from the airport’s front door to their destination should perhaps not come here at all. Anyone who wants a cheap ride and has time to kill can hop on the bus; routes 19 & 20 of TheBus network, to be specific. Both routes serve Waikiki via Downtown and the Ala Moana Mall area from bus shelters at the arrivals area. The ten-mile trip to Waikiki can take anywhere from fifty minutes or so on up, depending on time of day and where you’re jumping off. The fare is $2.50 for adults, $1.25 for children ages 6-17. Exact change is required; anyone with large amounts of luggage that won’t fit on their laps or under their seats shouldn’t bother – drivers will likely not allow you to board (www.thebus.org).

An easier option for those in need of affordable transit, shared van rides to the various visitor hotspots – and any address on the island, actually – are available with SpeediShuttle; fares begin at $14.55 each way to Waikiki; there are discounts for round-trip and multiple ticket purchases. You can book in advance online (www.speedishuttle.com). Tour operator Roberts Hawaii offers an Airport Express service, featuring an escort from your arrival gate, through baggage claim and out to the shuttle for just $13 each way; they guarantee no more than five stops to your hotel; you can book online or through their mobile site (www.airportwaikikishuttle.com).

All of the island’s taxi companies are allowed to pick up passengers from the airport, but they all operate on a meter-only system, eliminating any confusion. Fares to Waikiki start at around $35 and climb from there; there’s a charge of 35 cents per piece of luggage, too. Look for the dispatchers in green shirts outside of baggage claim on the center median.

When renting a car in Honolulu, you should always know ahead of time where exactly you’re going to park it  – and how much it’s going to cost. If the answer to question number one is “somewhere in Waikiki, I don’t really know?” then the answer to number two, will be – invariably – “a great deal more than the average human being feels they should have to pay for parking.” No, seriously – we’re taking $35 a night, sometimes more. And that’s not just in Waikiki, either – at Disney’s popular Aulani resort, for example, you’ll pay $35 for both self and valet parking. Frankly, your best bet is to just get a shuttle to your hotel and then rent a car later on an as-needed basis. (At Aulani, for example, there’s an Alamo rental desk on premises; Waikiki is littered with options.) Should you decide that the only way you’re leaving the airport is with a car, head down to the baggage claim area and grab the shuttle bus or van to your favorite agency counter. (NOTE: If you’re renting from Hertz or Avis, they’re just across the street from baggage claim, a couple minutes’ walk.)

You can do better everywhere else on the island – seriously, the food here isn’t great – but if you must, head to the lively Kona Brewing Company – at the center of the main terminal -- for frosty local pints and not-too-shabby Hawaii-style eats. For grab-and-go beyond the gut-bomb options in the food courts, check out the little Samurai Sushi & Bento shop near Gate 24; their spicy tuna poke is pretty darned tasty – they’re open round-the-clock.

WHERE TO GO DRINKING

Kick it old-school with a mai tai (or something else island-y) at the old-school Stinger Ray’s Tropical Bar & Grill, located at the Interisland Terminal. (You can walk over here without exiting security, so no worries -- you’ll just have to complete an agricultural check on your way back.)

GET AWAY FROM IT ALL

Three beautiful open-air gardens – in Hawaiian, Japanese and Chinese style – are the perfect place to hang out during those long layovers. With sculptures, water features and contemplative pathways, it’s about as relaxing – and beautiful – as an airport can get.

Hanging around a while? Grab a cab to Nico’s Pier 38, a popular casual restaurant trafficking in boatloads of ridiculously fresh and delicious seafood. From delicious fresh poke to pan-seared ahi, opah (great local fish) cakes with mushroom truffle cream sauce to Hawaiian lunch plate staples like loco moco, nobody goes hungry. The food comes out quickly and the restaurant – nicely located on the harbor – isn’t even four miles away from the terminals. If you’ve got even just two hours to kill, this is where you go (113 N. Nimitz Hwy.).

You aren’t going to fall in love or anything – and you may flat out hate it – but the Best Western The Plaza Hotel located by the airport exit and literally on top of the H1 Freeway is the best of a limited array of options. There’s a free, 24-hour shuttle to the terminals; just a block away is the Airport Trade Center, a shopping plaza with local favorite Big Kahuna’s Pizza, a Starbucks, a Jamba Juice and other conveniences. Rates hover far too closely to $200 a night than they have any right to, but this is Oahu, after all. Make sure they put you in the tower, not the low-slung, dated motel blocks (www.bestwestern.com).

For the Honolulu airport, visit www.hawaii.gov/hnl. To learn more about travel to Hawaii, check out www.gohawaii.com.

YOU MIGHT ALSO LIKE: Been to Oahu lately? It’s new vibe may surprise you, The scariest airports in the United States, and The things they don’t tell you in the safety demo