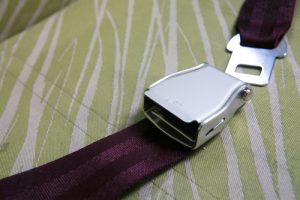 The things they don't tell you in the safety demo

Have you ever wondered exactly why airlines dim the lights upon landing, making you grope to find the overhead light just as you were about to finish your Sudoku? (Hint: It's not to save electricity.) Or why it's so important to put your own oxygen mask on before helping others? Or what's it like jumping onto a 737's inflatable emergency slide? And just how heavy are those over-wing exit doors?

If you're a bit of an airline nerd like me (I said a bit, by the way, I'm not one of those planespotter types), then you might have been curious. Or maybe you're the cautious kind, the kind who wants to have every possible advantage the next time there's a "Miracle on the Hudson" or, a less felicitous water landing, or if a lithium ion battery catches fire and you have to deplane in a hurry.

Well, British Airways has just the thing: the BA Flight Safety Awareness Course, a modified version of the same training that flight crews go through after they're hired and then once a year thereafter. Even if you're not the pessimistic or overly cautious type, it's a fascinating way to spend a day in London.

You get to jump down an emergency slide! And if you’ve ever wanted to pull the inflation cord on one of those airplane life vests, well this is your chance. You also get to evacuate a cabin filled with “smoke” (it's the kind used in a theater or rock concert, but does the trick). You'll practice the fine points of the "brace position." And best of all, you understand why some of those more obscure procedures and safety warnings are part of the flight experience.

One thing they don't tell you in the typical safety demo: people take those life jackets, located under or between your seat, as souvenirs. It’s a vile and punishable offense, and while airlines do check each seat at the start of every day, a plane could make several trips in a day, during any one of which a passenger could steal a life vest. So, I learned, it’s a good idea to check if the life jacket is indeed there. Not that it may much matter anyway. Only a small fraction of the passengers on US Airways Flight 1549 bothered to grab their life vests when Captain Sullenberger ditched his Airbus A320 into the Hudson River.

Put yours on first

You’ve heard it over and over: put on your own oxygen mask before helping those around you. But the safety demos never tell you why that’s so important. The reason? You might only have 15 or 20 seconds in the event of a cabin decompression, during which all oxygen would be sucked out of the plane (and your lungs), before you’d experience confusion and a euphoric “stoned” state, at which point you might forget everything you heard during the safety demo (if in fact you even listened, which you probably didn't). In 30 to 45 seconds you'd probably pass out. So it’s important to act quickly. (I think that if the standard safety announcement explained some of these fine points then people might put down their newspapers.) Andy and Diane, our instructors, also explained what else to expect during a sudden decompression: a burning smell from the oxygen canisters, severe vibration, a rapid descent (typically a drop of 20,000 feet in just 3 or 4 minutes), and an automated announcement telling you what to expect (because, obviously, the crew would have their own masks on and wouldn’t be able to communicate with passengers).

Some of the finer points of flight safety may seem particularly arcane and even anal, but there's a reason for every detail. If you’ve ever bothered, for example, to look at the safety card in the seat back pocket, you may have noticed that the correct brace position is to put your hands on your head, but not in just any slipshod fashion (and definitely not with the fingers locked together). See how the illustration shows one hand over the other? Is that just arbitrary? No as it turns out. Should something fall on you during a crash landing, you want to protect at least one hand (preferably the one you write with) because you’ll need it to unbuckle your seat belt when it’s safe to do so. Your other hand is in that position to provide some protection to your "strong" hand, which will be doing the unbuckling.

Why not fly backward?

And speaking of the brace position, wouldn't it be entirely unnecessary, I asked Andy and Diane, if airlines oriented their seats so that everyone was flying backwards? After all, in the event of a crash landing or controlled emergency landing, there’d be no need to assume the brace position if the seats didn't face forward. Isn’t that why flight attendants face backward in their jump seats? “People equate rear-facing seats with trains,” Andy answered. "We'd be out of business in a week," said Diane. And why not have three- or four-point harnesses rather than seatbelts, such as those worn by flight attendants, one of my classmates asked? Aren't they safer? You've probably guessed the answer: airlines recommend keeping your seatbelt fastened whenever seated, and no one would want to wear such an uncomfortable contraption during the flight.

While your pilots are waiting for take off, it may surprise you that they're probably doing a safety drill. What if this or that should go wrong on take off, which buttons would we push or steps would we take? So they actually go through the motions of various procedures, touching and even moving the actual controls. They call these touch drills, and Andy and Diane suggest that passengers do the same thing just before take off, perhaps buckling and unbuckling their seat belts three times. Sounds daft? "It's muscle memory," said Diane. "In an emergency, people panic. They think they're in their cars, and try to release the seatbelt by pushing a button rather than lifting a flap." Indeed, as the final report of the U.S. National Transportation Safety Board noted following the crash of US Airways flight 405, which landed in the water after take off from New York's LaGuardia Airport, "Some passengers tried to move from their seats while their seatbelts were still buckled, and other passengers had difficulty locating and releasing their seatbelt buckles because of disorientation."

And what’s with that escape path lighting along the floor? Why would red lights indicate an exit? Shouldn’t they be green (as in “go”) instead? Ever see taillights along the motorway in a fog, Andy explained? They’re red because they show up better in a smoke filled cabin. And indeed, it's true, as we learned when our "cabin" became a soupy fog.

Those doors are heavy

And what about those emergency over-wing exit doors? How heavy are they exactly, and how easy are they to open and toss? Well, we practiced on a Boeing 737. The answer? Even for me, a fairly strapping six-footer who goes to the gym regularly, they’re pretty heavy (40 lbs. to be exact). It’s not just the weight, but maneuvering them while sitting down that's an awkward challenge. Tip: sit way back in your seat or you’ll konk yourself on the head when the door swings down. Another tip: use your knee to rest the door and then swing it out and throw it on the wing (don’t worry, you won’t be sued for damages). I was surprised that the actual latch mechanism is so easy to engage you can do it with one finger. Even though, according to our instructors, it’s been 27 years since an over-wing exit door has had to be opened on a British Airways plane (other than in this cavernous training hangar, that is), I still feel safer now that I've done it. The bad news is that half the people (probably more) who I see sitting in those exit rows wouldn’t have the strength to manage the door. Airlines should not sell these seats to anyone merely because they can pay the fee for the extra legroom. But don’t worry if some nut tries to open the doors in flight. They’re impossible to open owing to air pressure being much higher inside the plane than outside.

Perhaps the most macabre little tidbit

Next time you get on a plane, take note of the handles by the door, just inside the plane. What on earth are those for? Correct, they're grab handles, but why? Well, in a panicked emergency evacuation, when the flight attendants are manning the exit door, passengers, in their mad rush to get off, have a tendency to push them out of the way, sometimes all the way down the slide. The handles are there to make sure that the flight attendants stay on the plane if that's what they need to do.

Why don't airlines tell us all this?

I left the course thinking that more passengers would listen to the pre-flight safety demo if airlines shared some of this insider information before each flight, maybe mixing it up from time to time so that the demo doesn't get overly long and cause more people to tune out. On one flight, the demo might include the finer points of opening the over-wing exits. On another flight, more information about why it’s so important to put your oxygen mask on first (and quickly) before helping others. More passengers would probably do what they're told in an emergency if they knew the reasons behind these rules (and time and time again, in emergencies, passengers do not listen, do the wrong thing, and become victims).

Speaking of the whys, just why do airlines dim the cabin lights during nighttime take offs and landings? You guessed it: to help adjust your eyes to the dark (either inside a smoke filled cabin or on a darkened runway). And why do some airlines ask that you keep your shoes on (except high heels, which can tear the slide) when taking off and landing? Because the runway might be burning hot after you jump down the slide.

And while it's doubtful that airlines will ever add these extra details to their pre-flight safety drills, the main thing I left the course with was a better respect for the thought that has gone into airline safety over the years, as each crash and emergency landing contributes to collective knowledge. And I have even more respect for flight attendants who, as we all know, are primarily there for no other reason than our safety.