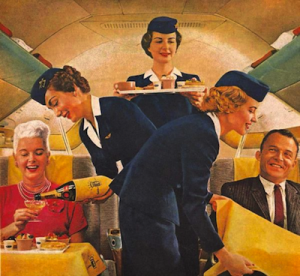 10 Tips to Take the Stress Out of Holiday Travel

Crowded airports, long lines, delayed flights, and angry people. Oh sure, you love the holidays, but there is little to celebrate about holiday travel. How do you cope? Here are a few suggestions to take the sting out of your trip home.

1. Show up early! Really really early. Yeah, we know, airports can be a tad dull, but we’ll gladly risk boredom over rolling up at the last minute, sprinting through a mob of travelers, only to watch sad-faced as your plane leaves the gate. And running with a carry on? Not cute. So show up early, allow yourself enough time to deal with any snags that may occur and, who knows, you may even encounter a kindly gate agent willing to put you through on an earlier flight. In other words, don't set yourself up for air travel failure!

2. Spend a little money on a day pass for the lounge. Hey, it’s a holiday, and you deserve it, right? And should there be a delay, or a cancelation, or any other form of unwanted wonkiness, chances are you’ll get better customer service in the lounge. So, grab an eggnog and a handful of those little quiches that you like so much (hey, load up, they’re free!) and live a little. Plus, in case you haven't heard, airline VIP lounges aren't just for VIPs!

3. Get the extra legroom seat! C’mon, It’s not that much more, and won’t you be happy without your own knees in your face for 5 hours? Yes, you will. Also? You’ll actually have enough space to comfortably use a laptop, no matter how far back the guy in front of you slams his seat back. Some airlines, such as JetBlue, even throw in snazzy privileges like priority check-in and boarding. Fancy!  Here's a rundown of what the airlines offer.

4. Don’t check a bag! And don’t try cramming everything into some mammoth heavy-as-all-heck carry on either. Send them four or five days ahead to Grandma's via FedEx Ground or even the old P.O.! It’s so easy! No sitting in line to check a bag, no waiting on a bag, no lugging around a bag, no fighting for overhead space…none of that!  Plus, it's often cheaper than paying checked bag fees! And FedEx has much better tracking and they'll even insure your valuables (airlines won't)! Save your cash for that extra legroom seat.

5. Don’t fritter away your miles on some dinky seat in economy! Instead, use them to upgrade. 15,000 Miles on United gets you an upgrade from your $300 coach fare to a $1,500 (or more) business or first class seat, which is cuh-learly a better value.

6. Be nice to airline staff, even when you don’t want to be. Turning into a human geyser of F-words, rolling your eyes, or getting snippety with the agent will –in most cases- probably only make things worse. Plus, hello, too much ‘tude at the airport nowadays and you could very well be hauled off by the police. And won’t that make for a memorable holiday story for years to come! So if you find yourself getting steamed, find your happy place, kill ‘em with kindness! Flash a little smile, ask how they’re holding up during all this crazy holiday hullabaloo, offer a compliment, be nice!

7. Splurge on the noise canceling headphones. When that kid starts crying at top volume in the next row, or the guy from Accounts Payable is barking nonstop into his blackberry, you won’t have to suffer through any of it! MAGIC! (Our favorite: the Bose NC-15 model. Pricey, but worth it).

8. Ok, so those neck pillows you always see at the airport? You may roll your eyes, they may look ridiculous, but they are pretty comfy. So grab one! Nobody says you have to wear it around the airport. In fact, don’t. Hide it in a tote bag if you’re too embarrassed to be seen with one. But trust us, when you’re stuck in the middle seat, you’ll be thrilled to have it. And so will your seatmates when you’re not flopping around like a bobble head in your sleep. Everybody wins! So grab one! They're cheap!

9. Load up your iPad, laptop, Kindle, whatever doohickey thingamajig gadget with plenty of good stuff to keep your attention during the flight. Now’s a great time to make a dent in whatever series everyone was raving about that you have yet to see. The Wire! Lost! Family Matters! Isn't that Grandma Winslow a crack up? Just, you know, nothing risqué or NC-17. Keep it classy! And if your battery power starts to fade, have a book handy.

10. You’ll get cranky on an empty stomach, so remember to eat a little something! And don’t rely on the airline to feed you. Pack a few things in your carry on, such as fruit, or a granola bar, or grab something yummy at the airport (some airports actually have amazing food)! And don’t forget to stay hydrated. If they do happen to offer food on your flight, avoid the crazy stuff. Eating a sweaty dish of chilaquiles at 30,000 feet may do more harm than good, so maybe just stick to the cheese plate and a ginger ale.