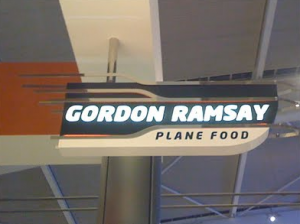 Who loves airports? Very few people! Who loves food? Pretty much everyone, right? Sometimes – more and more, actually – the two are not mutually exclusive. For every terrible Newark (EWR), there's a pleasant little Portland (PDX) – a place where travelers can actually feel human, if only for a little while. A place where real food (and drink) is served. In nice surroundings, even. Hungry? Airfarewatchdog has selected ten for-really-reals awesome airport dining experiences worth traveling for. PS: You may have seen other lists out there. Ours is better, because we've actually been to these places. You're welcome!

Used to be we could blame Northwest, now it's Delta's fault. Doesn't really matter who's doing it, but plenty of travelers heading east or west get shoved through the Twin Cities. Not the worst thing that's ever happened; this is a modern and fairly easy to use airport; those on longer layovers can just hop the train from the terminal over to the Mall of America, just minutes away. Staying closer to your gate? There are, luckily, some great places to eat; right now, there's some good buzz is on the recently-opened Surdyk's Flights. Surdyk's is a revered local liquor purveyor that's now serving up wine, beer and cocktails (along with some great food) in a sleek little spot in the Lindbergh Terminal mall area. Try the local cheeses (and the local beers). Order a Bellini and the baked figs, stuffed with blue cheese and walnuts. Try it all. (Don't miss your flight! Or do!) (Current fares to Minneapolis)

#2 PLANE FOOD @ LHR
When life brings you a layover at London's Heathrow, make tracks for celeb chef / noted screamer Gordon Ramsay's killer all-day caff, a spot as smart and pretty as its host, Terminal 5. That's the British Airways one – the one that makes us forget how much we despise Heathrow. Truth is, this restaurant could be anywhere and it would be super – it opens at 5:30 in the morning and stays open until last flight, late in the evening, with a menu that includes everything from carpaccios to ceviches to big honking British beef steaks (grass fed and specially aged, of course). Why yes, you'd like to see the wine list. (Fares to Heathrow)

You may remember her from such Food Network programs as "Iron Chef America," which she won, back in 2005. While the made-for-TV Cora may not be the next Jean-Georges – after all, until now, her biggest project has been a just-okay restaurant at Disney World – the little lady sure is tearing it up at San Francisco's schmancy new Terminal 2. Flyers are flipping for her lobster mac and other fun small plates, plus there is also a great cocktail list. (How many times have you seen ouzo on a cocktail menu at an airport outside of Greece?) Of all the flashy new food outlets in this terminal, Cat's is queen. (Current fares to San Francisco)

#4 ROGUE ALE HOUSE @ PDX
One of the Northwest's best-known breweries (and still one if it's best) oversees this jovial pub on Concourse D at Portland's airport, easily one of the best places for hungry and thirsty travelers to log time. (It's so nice here, that we've been known to fly to PDX even when our destination is Seattle, a pretty easy drive to the north. It's that much nicer.) With nearly ten Rogue brews on tap and a neat little menu that includes kobe beef cheeseburgers and pizzas, not to mention breakfast, this is definitely where you get started, PDX-wise. Rogue, an outpost of the Newport, OR mothership, is located post-security, so you can grab some beer to go – they'll even fill a growler for you. Still thirsty?; Some say Portland brewer Laurelwood is the better choice – they're at the airport too. Compare and contrast, we say. (Laurelwood's got two locations, on Concourses A and E.) (Current fares to Portland) The famed restaurant that attracts young lovers and hungry families top the top of The Peak on Hong Kong Island also feeds travelers in an airy, open-plan space at Hong Kong's airport (Terminal 1). From Hainanese chicken to hamburgers, sushi to oysters and some really solid Thai food, this is essentially a high-end, pan-Asian diner that will please pretty much everyone; the sea view and live jazz music many evenings encourages sticking around. After an extended stay in some hotter and sweatier corner of Southeast Asia, this cool, civilized room feels like a tiny miracle.

Is that cheap Frontier Airlines fare forcing you into an unexpected date with Milwaukee on your way to somewhere else? Do you now feel like a total schlimazel? Don't be a schlemiel -- Milwaukee's airport is one of the best-kept secrets in airport awesomeness, with a great independent bookstore (Renaissance), kiosks from excellent local coffee roaster Alterra, killer pizzas at Nonna Bartolotta's and now, to complete the picture, burgers and frozen custard from Northpoint. Did you know that burgers and frozen custard are a religion in Milwaukee? Did you know that Northpoint is considered by people who like their food to taste good to be one of the top purveyors of both? Opened a couple of summers back on the city's lakefront by the same folks behind Nonna's and a bunch of very fine Milwaukee restaurants, the stand is seasonal. The newer airport location is not, thank goodness -- travelers get access to the good stuff year-round. If you've never had fried cheese curds, don't start now, though addicts should be advised that Northpoint's are worth the trip. (Current fares to Milwaukee)

#7 SORA JAPANESE @ DTW
The idea of finding edible udon and tasty sashimi at the Detroit airport only surprises people who forget how far back Japan and Michigan go. The legacy of this synergy has left the suburbs of Detroit with some unexpectedly awesome izakayas, seriously worthy noodle bars and secret sushi spots. Sora, located in the shiny McNamara Terminal at DTW, wouldn’t knock 'em dead in Tokyo, but its soups and rolls and very Japanese decor makes it one of the least airport-y airport dining experiences in the country. Well worth a visit. Gets busy when one of the daily flights to Japan is delayed. (Current fares to Detroit)

#8 ONE FLEW SOUTH @ ATL
If you only have time to eat one meal at Atlanta's obese and oppressive Hartsfield Airport (and pray to God/Gaia/etc. it's that or less), make tracks for the hottest little hotspot on a terminal concourse, like, ever. Well, maybe not the hottest, but Terminal E's One Flew South is pretty stellar. BLT's with smoky Benton's bacon, Carolina trout with celery root puree in a brown butter sauce, civilized cocktails, great decor, sweet little desserts – this is about as close as it gets to having a real restaurant in an airport as you're likely to see. Bar seating encourages single diners to stop on in; a beautiful mural of a Georgia pine forest soothes frayed nerves. We'll never take back all the terrible things we've said about this airport, but at least we've got somewhere to hide on our next forced stopover. (Latest fares to Atlanta)

It's so much better to get wherever you're going in Latin America directly from your home city, but there's a silver lining to the cloud that is a Miami layover: A 24-hour La Carreta. And also a 24-hour Versailles. The twin Cuban chainlets that every Miamian knows (and most love at least a little) command a large presence in the revamped main terminal here; La Carreta is a full-service restaurant all day, and a sandwich slash cafe cubano spot late at night. (If you can't find it, just ask any airport worker. It's where they're all eating, anyway.) (Today's list of airfares to Miami)

#10 TORTAS FRONTERA @ ORD
Rick Bayless. At the airport. At O'Hare, no less. (Terminal 1 now. Terminal 3 soon.) Need we say anymore? Okay, fine: Tortas. They're Mexican sandwiches. Kinda like panini. Frontera. As in Frontera Grill, as in Topolobampo, as in Xoco – as in the places you want to eat next time you are in Chicago. (Particularly Xoco. Xoco is probably the best, even though it's the most casual.) Anyway, you can now get Bayless' endlessly good food at one of the world's most endless airports. Sandwiches like the Pepito -- beer-braised short ribs topped with Chihuahua cheese, pickled jalapenos and cilantro crema will have you feeling all tingly and excited. Who's for a stop at O'Hare? Suddenly, us. (See airfares to O'Hare)