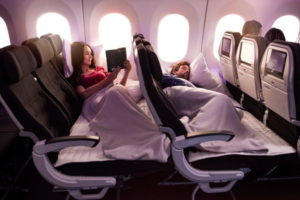 Could Lie Flat Seats in Economy Be a Reality Soon?

Back in the early aughts of air travel, you could expect a nice, well-cushioned seat — even in economy. Nowadays, airlines have slimmed down economy seats to the bare essentials and are cramming more seats than ever into the narrow fuselage of an aircraft. A few designers are looking to change the economy experience for the better by utilizing the overhead space in order to provide more space and more seats.

Air New Zealand introduced its Skycouch seats in economy back in 2011, and it remains the best way to lie down in the economy cabin to this day. By converting a row of seats into a couch, passengers can book a comfortable row all to themselves ahead of time and enjoy more space for much less than paying for Business Class.

Some new concepts are looking to take this a step further to provide lie-flat or more comfortable options for all passengers booked in the same row. While none of these concepts are currently installed in any aircraft, they do provide a look at what the future of economy could become.

Zephyr Aerospace started a crowdfunding campaign for its Zephyr Seat in May 2020. It took only a month to reach its goal of $100,000, but the campaign remained open until the end of 2020 and the company managed to raise nearly $740,000. The seat design received a lot of buzz for its capsule-like experience similar to pod hotels.

Founder Jeffery O’Niell designed the seats to fit in the existing space of premium economy configurations. The seats are similar to a bunk bed as one is placed on top of the other with a built-in ladder, which pops out from the side for the person in the top bunk to get in and out of their seat. The seat stays in a fixed recline and when you want to convert to lie-flat mode, there is a pad that folds down under the TV screen that allows you to lie flat at an angle.

The design is quite enticing and the company is in talks with Boeing, seating manufacturers, and multiple airlines trying to get through the approval and certification process. As a former flight attendant, one big road block I see with this particular design is that it may be difficult to pass an FAA certification. It must be demonstrated that all passengers can be evacuated within 90 seconds in an emergency. Since passengers would be seated on top of each other for take-off and landing, I see this being hard to accomplish.

Nonetheless, there is a lot of interest in these seats. It even won a contest on an episode of the TV series Meet the Drapers, which is similar to Shark Tank. If the design can be tweaked to become certified, I’d be glad to sit in a Zephyr seat when flying long-haul. For videos of the prototypes check out Zephyr’s YouTube channel.

Another neat design, which replaces overhead bins with beds, is Toyota Boshoku’s Cloud Capsule concept. It was on the Judges’ Choice shortlist for a Crystal Cabin Award, and for good reason. Passengers would purchase a normal economy seat, but have the option to book access to the Cloud Capsule.

The multipurpose room would be located in the overhead bin space and would only be utilized at cruising altitude since it would unlikely be able to be certified for safe use during taxi, takeoff, or landing. During the flight, passengers would be able to access these capsules by a set of stairs that would be installed into the ends of each row of the seats below. The company says that the Cloud Capsule could also have its own heating and cooling settings.

While this is also a very intriguing concept, it would take a shift in passenger behavior regarding checking bags. Toyota states that redesigns of the rest of the economy class cabin would allow bags to be stored underneath the seats, but many people already utilize that space for luggage and the overhead bins still fill up. For long-haul flights, this could be a neat option for sections of the economy cabin. To make it work, I could see airlines charging extra for large carry-on bags, encouraging passengers to check luggage and make space for the Cloud Capsule.

Although not a lie-flat option, the Chaise Lounge Economy Seat project was another on the Crystal Cabin Award shortlist. Designed by 21-year-old student Alejandro Núñez Vicente, the dual-level seat alternates each row between floor level seating and slightly elevated seating.

Núñez Vicente told CNN Travel that “The lower row has the advantage of passengers having the lounge experience of a couch by stretching the legs, while the upper row provides an SUV experience, making it possible, for instance, to cross the legs due to the increased legroom and overall living space.”

The design would eliminate the overhead bin space, but it would also make room for some luggage to be stored in compartments under the seats. Since passengers wouldn’t be directly behind one another, seats would be able to recline at a larger angle and would offer a more comfortable experience for both short and long flights.

The Chaise Lounge is currently a student-led university project, but some companies have shown interest so Núñez Vicente is working with his TU Delft University professors to design a prototype.

In February 2020, Air New Zealand unveiled a new lie-flat prototype for economy passengers, which it called the Economy Skynest.

In the press release, General Manager of Customer Experience Nikki Goodman said, “We see a future flying experience where an economy-class customer on long-haul flights would be able to book the Economy Skynest in addition to their Economy seat, get some quality rest and arrive at their destination ready to go.”

The Skynest features six lie-flat beds spread across three levels, with two beds on each level. It’s an angled design allowing flight attendants to attend to passengers on either side easily. Passengers would still need to be seated in a regular seat during taxi, take-off, and landing. The sleeping pods would only be utilized inflight and it’s unclear how many would be available per aircraft.

The airline was still in the process of certification and Air New Zealand stated that it would decide whether to operate the Economy Skynest after its inaugural year of the new Auckland-Newark service.

Unfortunately, shortly after this announcement, international travel came to a screeching halt due to the coronavirus pandemic and the new Auckland-Newark flight never took off as it was initially planned to launch in October 2020. The airline has not set a new start date for this flight. At one point in time, Air New Zealand said it was postponed until late 2021 at the earliest, but it seems like it may not take off until 2022, if at all.

However, if the new prototype gets certified and demand for long-haul flights picks back up, we could see this new option for a lie-flat experience in economy come to fruition. If any airline is going to do it, I’d say Air New Zealand is the most likely due to its experience operating flights with the original lie-flat seat design for economy, the Economy Skycouch.

Let’s hope some of these seat designs become bookable in the future. If you’ve ever been lucky enough to have a whole row to yourself on a long-haul flight, you know that it’s a truly restful experience. I’d even take a whole row of economy seats over certain Business Class cabins. These seat designs could make it possible to book something similar for a relatively affordable cost compared to premium cabins.