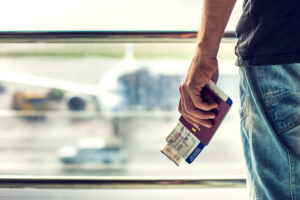 When the pandemic halted travel bookings in early 2020, airlines adapted by allowing free changes to be made on all tickets — including the most restrictive Basic Economy fares. Now that travel demand has started to improve, the ability to make changes on tickets will, once again, depend on the type of ticket you purchase.

Restrictive Basic Economy Fares Are Back

While American, Delta, and United all made headlines at the end of August 2020 for “eliminating change fees”, the important thing to note is that this new policy only applies for standard Main Cabin Economy fares or above. Since all fares, including Basic Economy, didn’t have any change fees at the time of this announcement due to the pandemic, this really important point may have been glossed over by the average person who only read the headlines.

As of May 1, 2021, possibly the worst restriction of Basic Economy is now back in place on most U.S. airlines. On Alaska, American, Delta, and United, these types of fares can no longer be changed at all for travel originating in the U.S. It essentially means, “Use it or lose it.” American Airlines was the first to reinstate this policy for new tickets purchased starting April 1, 2021, while the others changed their policy back on May 1st.

Since the next level economy fare has no change fees on these airlines, you’ll have an even bigger incentive to “upgrade” your purchase to a standard or Main Cabin Economy fare when comparing prices.

JetBlue is still allowing its Blue Basic fares to be changed without a fee for purchases made through May 31, 2021. Starting June 1st, it will still allow changes to be made to Basic Economy fares for a fee of $100 - $200 depending on the route, while JetBlue’s standard fares no longer have change fees.

How to Book Flights That Can Be Changed

We all knew this day was going to come eventually, but I’m still a little shocked that most major U.S. airlines went back to a policy where the cheapest flights can’t be changed at all rather than instituting a fee for changes on Basic Economy fares. Since the travel landscape is still somewhat uncertain, you may want to avoid booking these types of fares completely or book flights on airlines that still allow changes to be made, usually for a fee, on the lowest fares.

When the topic of flight changes comes up, it must be mentioned that Southwest Airlines still has the best policy in the industry. Southwest doesn’t sell a Basic Economy fare and maintains its policy of no change fees for all fares. Flights can be changed or canceled up until 10 minutes before departure. A travel credit will be issued for cancelations or if the new fare is lower than what was originally paid.

Book with A Budget Airline

Surprisingly, you’ll have a much more flexibility if you book the lowest fare with an ultra-low-cost carrier like Allegiant, Frontier, Spirit, or Sun Country than you will if you were to book a Basic Economy fare with the major airlines. These budget carriers may charge a small fee to make changes less than 60 days before departure, but at least they allow the flights to be changed at all, so you won’t lose the entire value of your ticket if plans change.

In the case of Avelo, America’s newest budget airline, changes do not require any fee at all. And booking with JetBlue is also a great option if you’d like a more comfortable experience with the ability to pay a fee for changes on its Blue Basic fares.

If you’d like to fly on Alaska, American, Delta, Hawaiian, or United, you’ll want to avoid Basic Economy and make sure you book at least the “Main Cabin” or standard “Economy” fare to have the ability to make changes. Best of all, these types of fares no longer have any change fees.

Book with an International Airline

While the major U.S. airlines simply don’t allow changes on Basic Economy tickets, many international airlines around the world still do, though fees may apply. For instance, you can book with British Airways, Air France, or Lufthansa if you want to have flexible travel plans for the lowest-priced tickets. In fact, you can book the same American Airlines flights through British Airways and still get the lower price with the ability to make changes to your ticket, whereas booking those same flights through American wouldn’t allow any changes.

Related: The Best and Worst Airlines for 2020

When can a Basic Economy Fare Be Changed?

The U.S. Department of Transportation’s 24-hour rule is still in effect for all fares — including Basic Economy. This means any flight to, from, or within the U.S. can be cancelled, free of charge, within 24 hours of booking, as long as the flight’s departure is at least 7 days away. Some airlines and online travel agencies (OTAs) have an even more lenient risk-free cancellation policy that allows flights to be cancelled even if the day of departure is less than a week away.

Note: Travel agencies are not subject to this same DOT rule. While the major OTAs such as Expedia and Priceline offer this policy, many smaller OTAs do not. Double-check cancellation policies when booking via a third party.

After the 24-hour period has passed, you may still be able to make a free change or cancel your trip if there has been a “significant change” in schedule to your flight. There is some ambiguity there, but if your flight gets canceled by the airline, gets changed to a completely different time, or switched from a nonstop to a connecting flight, you have the choice to cancel and get a refund or the airline may be willing to change you to a more favorable flight free of charge. You just have to call the airline and let them know what you want to do.

Lastly, if you purchased a Basic Economy ticket between late March 2020 and April 2021, there is likely a free change waiver on your ticket. The rules vary by airline, but this means you should still have the ability to make at least one change to your ticket without any fees as long as it was purchased within this time frame. For tickets purchased May 1, 2021, or later, beware of Basic Economy.