Spirit Airlines is beefing up its presence in Latin America by adding 2 new cities in Colombia and a new flight to El Salvador. Starting this spring, look for new nonstop flights from Ft. Lauderdale to both Barranquilla and Bucaramanga; and from Baltimore to San Salvador. Intro fares are available from $212 roundtrip and you can find connecting flight options from several other U.S. cities.

Save even more when applying a promo code on Spirit Airlines! Fares fell as low as $199 roundtrip and the first weekend after this new flight was announced and we saw some big discounts on several of the connecting flights to these new destinations in Colombia. Many routes fell below $300 roundtrip or in the low $300 range after the discount was applied for specific travel dates.

New Flights to Colombia and El Salvador on Spirit Airlines

Currently, there isn't any direct competition on the routes from Ft. Lauderdale, but we will likely see lower fares to Barranquilla on American and Avianca from nearby Miami Airport (MIA). Spirit will be the only airline flying nonstop between the U.S. and Bucaramanga. In Baltimore, Frontier will compete directly with its recently announced new nonstop service to San Salvador. Both Avianca and Volaris will also compete from nearby Washington-Dulles Airport (IAD).

New routes often spur fare wars so we'll be keeping an eye on these new routes to Latin America. To find out about promo code sales and price drops on all airlines, make sure to sign up for FREE airfare alerts.

These intro fares are not advertised with an expiration date and fares may jump in price at any time. Also, make sure to check for any current promo code deals that may discount the price even further.

New Flights to Colombia and El Salvador on Spirit Airlines

Since flights to Colombia depart in the morning from Ft. Lauderdale, it may be necessary to depart from some Western U.S. cities on a red-eye flight to FLL the night before in order to make the connection to Colombia.

Check to see if you can receive a discount by using a promo code sale on Spirit Airlines. The promo code we used to find the prices below was for 40% off and it expired on January 12, 2020, at 11:59 pm ET. You may find similar prices with one of Spirit's weekly promo code deals.

This is just a sample of fares. Connecting flights from U.S. cities will be similar to both Bucaramanga and Barranquilla and you'll find cheaper connecting flights to El Salvador for winter travel.

Spirit's Bare Fares only include one small personal item (small backpack, large purse, briefcase, etc.) that will fit underneath your seat. Checked baggage (up to 40 lbs.) starts at $30-$37 each way when purchased during the initial booking. Larger carry-on bag fees start at $37-$42 each way.

Searching on Spirit's site, I found a flight departing Ft. Lauderdale FLL on Wednesday, April 29, returning from Bucaramanga BGA on Wednesday, May 5, for $212 roundtrip. 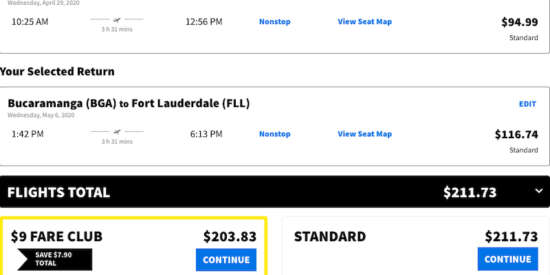