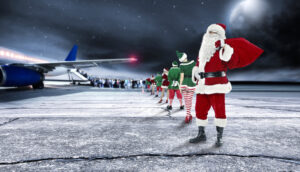 It's Not Too Late! Last-Minute Christmas Deals and How to Find Them

With the holiday season in full swing, you may be looking for a cheap flight to visit the family for Christmas — and you may have noticed that it’s more expensive than you expected. Unless you can figure out how to make reindeer fly, you’ll likely be stuck paying a pretty penny, but there are a few exceptions and tips you can use to find the best deal possible.

Prices for Christmas flights are usually cheaper if you book well in advance, but there are still relative deals out there for procrastinators looking for a last-minute deal. Follow these steps to make sure you get the best deal possible — you may even catch a glimpse of ol’ St. Nick on your way.

Re-Think What a “Good” Price is for Holiday Travel

First things first. Plan on paying more than you would for a flight in the off-season. Airlines know this is one of the busiest times of the year for travelers and are willing to keep seats priced high. The price for a Christmas flight could be more than double the lowest available fare in the off-season. 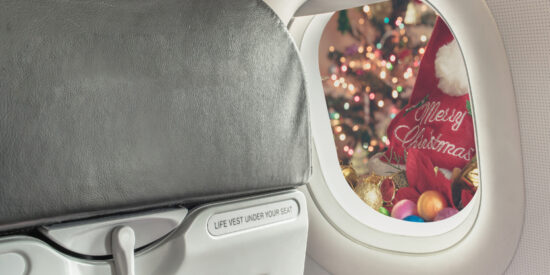 Flexible Travel Dates are the Key to a Cheap Flight

Celebrate Christmas in Another Country

The great thing about Christmas is that it is celebrated across the globe. Take the opportunity to scratch off a destination on your bucket list and see how another culture celebrates this holiday. Unfortunately, since this holiday is celebrated elsewhere, flights tend to be more expensive no matter where you decide to travel. But if you just want to get out of the country for the holiday, there are sometimes last-minute deals to neighboring countries in Canada and Mexico. 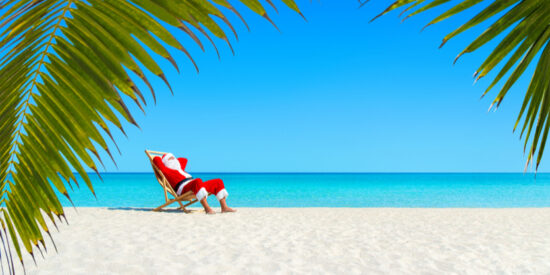 If you aren’t able to take very many days off from work, you may be stuck flying on the most expensive days to travel. That is, unless, you can snag a deal flying on either Christmas Eve, Tuesday, December 24, or Christmas Day, Wednesday, December 25. A quick one or two-night trip to visit the family may be all you can take and it will usually be cheaper if you can fly at least one direction on the holiday itself.

And if you’re able to stay for a full week after Christmas, flying back on New Year’s Eve, Tuesday, December 31, or New Year’s Day, Wednesday, January 1, will most likely be drastically cheaper than flying on the weekend. 30,000 feet above ground may not be your first choice for celebrating New Year’s, but if the price is right, the bird’s-eye view of all the fireworks below isn’t so bad.

Don’t Assume a Budget Airline will be the Best Deal

Budget airlines are great for keeping costs low on all airlines. But when it comes to Christmas travel, I often notice that Spirit Airlines, the largest budget carrier in the U.S., often has higher prices than its competitors. This is likely due to less capacity in the markets it flies and seats are extremely limited for these popular flight times. Make sure to compare all airlines when searching and add up any ancillary fees like bags and seat selection before you decide which airline to fly. You may need to bring a bigger bag than usual if you’re traveling to a cold-weather climate.

However, keep your eye out for special promo code sales on Frontier Airlines. Although most sales have blackout dates around holidays, Frontier usually has a specific promo code sale for off-peak travel dates surrounding certain holidays. These sales usually pop-up closer to the holiday when prices have already started to creep up, but the discount may bring the price back down to a reasonable cost. Take the Bus if You Must

Sometimes a flight is the only option, but if you’re going just a short distance, check to see if there is a cheap bus service to your destination. Often, the total travel time may not be all that different if you’re traveling somewhere within 300 miles. And if a flight from your home airport is ridiculously expensive, expand your search to include more airports within a reasonable bus ride away. This will give you more options to find a cheap flight and it may be the difference between enjoying Grandma’s cookies or having another ramen-filled Christmas dinner.

Note: These fares have been updated as of 3:00 pm, ET, December 5, 2019, and are subject to change at any time. These fares are meant to show a few examples of last-minute Christmas deals that can be found and may sell out quickly. If you'd like to spend a full week up in NorCal, this is a great deal from Alaska Airlines. Fly nonstop from Los Angeles to San Jose for $107 roundtrip. I found seats departing Los Angeles LAX on Saturday, December 21, returning from San Jose SJC on Saturday, December 28. And you'll have a wide selection of seats to choose from since this price is bookable in Alaska's Main fare class.

› See all of our current deals to San Jose (SJC), San Francisco (SFO), and Oakland (OAK) from all over the U.S. and Canada

Newark to Boston $127 Roundtrip on United Fly nonstop from NYC up to New England for just $127 roundtrip on United. I found this price for an early morning flight, departing Newark EWR on Christmas Eve, Tuesday, December 24, returning from Boston BOS on Friday, December 27. Arrive in time for a Christmas Eve meal and return before you pick up the accent and get back to the Big Apple for New Year's — all for less than $130. Of course, this Basic Economy fare on United would require that you only take a small personal item. Add a checked bag for $30 each way or choose a standard Economy fare for $197 and bring a full-size carry-on.

› See all of our current deals to Boston (BOS) from all over the U.S. and Canada For those that have escaped the cold down in South Beach, pay your friends and family in NYC a visit for the holidays. Nonstop flights on Frontier can be found as low as $171 roundtrip, departing Miami MIA on Monday, December 23, returning from New York LGA on New Year's Eve, Tuesday, December 31. Yes, you will be in the air when the ball drops. Raise a glass of champagne and toast your seatmate while bringing in the New Year at 30,000 feet. For those who prefer to be grounded when 2020 arrives, return flights on Wednesday night, New Year's Day, January 1, are about $50 more. Since it's Frontier, pack super-light or pay $30-$40 each way for larger bags during booking.

› See all of our current deals to New York-LaGuardia (LGA), New York-Kennedy (JFK), and Newark (EWR) from all over the U.S. and Canada 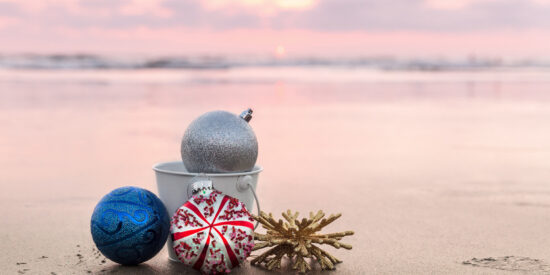 Fly all the way down the West Coast, nonstop, from Seattle to San Diego for $197 roundtrip. I found this price Delta, departing Seattle SEA on Monday, December 23, returning from San Diego SAN early in the morning on Thursday, December 26. Cheaper flights are available if you can return on Christmas Day. And good news for those that hate Basic Economy! It's only $20 more each way to upgrade this fare to a regular Main Cabin Economy fare.

› See all of our current deals to San Diego (SAN) from all over the U.S. and Canada

Atlanta to Denver $254 Roundtrip on Southwest Fly nonstop from Atlanta to Denver for $254 roundtrip on Southwest. It may not be peak ski season, but there is sure to be some snow on the slopes. I found this price departing Atlanta ATL on Sunday, December 22, returning from Denver DEN on Thursday, December 26. Pack all the gifts you can fit in your 2 free checked bags. Don't need any checked bags? It's even cheaper on Delta if you push your travel dates forward by one day.

› See all of our current deals to Denver (DEN) from all over the U.S. and Canada Cross the border for Christmas and sing Feliz Navidad! Nonstop flights from Dallas to Mexico City are $543 roundtrip on American/Interjet. I found this price departing on an American Airlines flight in the morning on Christmas Eve, Tuesday, December 24, returning from Mexico City MEX on Interjet, Sunday, December 29. Pack what you can in 2 free full-size carry-on bags on Interjet, but keep it light as Interjet limits your hand luggage to just 22 lbs. total. Add a checked bag from just $30 each way if you need more space.

› See all of our current deals to Mexico City (MEX) from all over the U.S. and Canada

Boston to London $698 Roundtrip on Norwegian 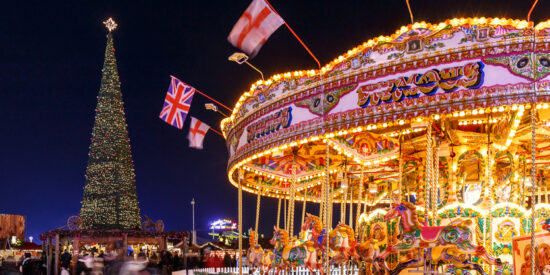 Hop across the pond for your caroling. Taking off a few extra days the week before Christmas can still get you some decent deals for transatlantic flights. Fly nonstop from Boston to London for $698 roundtrip on Norwegian. To get this price, you'll need to purchase two separate one-way tickets in each direction on Norwegian's site or book through a third-party site that combines the fares. Depart Boston BOS on Monday, December 16, returning from London LGW on Thursday, December 26. The return flight will need to be booked on the UK version of Norwegian's site in GBP. Use a credit card that doesn't charge foreign transaction fees to avoid extra costs. This gives you plenty of time to do your Christmas shopping in London so you should be fine with only a carry-on bag. If you have some gifts you'd like to bring and need to check a bag, it's just $50 each way.

› See all of our current deals to London-Heathrow (LHR) and London-Gatwick (LGW) from all over the U.S. and Canada

Related: When to Book? 10 Tips for Booking Cheap Holiday Flights