Southwest Airlines extended its schedule today and has a slew of new routes with the new schedule extension. The most exciting news is new nonstop service between Sacramento (SMF) and Maui (OGG) and the earlier November start of Southwest's nonstop flights between Sacramento and Honolulu (HNL). With more flights to Hawaii, fares on Southwest are low from several cities once again. Book quickly because these low fares sell out in a flash! Fares from the mainland to Hawaii are as low as $99-$178 one-way or $198-$356+ roundtrip.

Southwest is also beefing up its new flights from Oakland (OAK) and San Jose (SJC) to Lihue, Kauai (LIH) and Kona (KOA). Nonstop service, which begins in late January, will switch from 3-4 days/week to daily service on March 7, 2020. The switch to daily service means that there are now more connecting flight options to these Hawaiian islands from other cities on the mainland.

And similar to Southwest's decision to start Sacramento - Honolulu service in November, interisland flights between Honolulu (HNL) and Lihue, Kauai (LIH) will now also start November 10, 2020. Along with the announcement, Southwest is selling tickets as low as $29 one-way or $58 roundtrip for all nonstop interisland service.

Daily nonstop service begins on March 7, 2020, on the following routes:

Connecting service and low intro fares are also available to the new destinations in Hawaii from a few cities in the Western United States and also on interisland flights within Hawaii. Existing connecting flights have low fares once again with the schedule extension.

Intro fares on the new and early start routes from the mainland to Hawaii are valid for purchase TODAY ONLY! Tickets must be booked by 11:59 pm PDT, September 26, 2019, or while supplies last. Low fares are selling out quickly!

All fares also work in the reverse direction and this is not a complete list of Southwest deals to Hawaii.

These prices aren't quite as low as the $98 roundtrip flights that were for sale this spring when Southwest first started selling tickets to Hawaii, but you may want to book these quickly if you want to travel on Southwest to Hawaii this spring. Southwest fares to Hawaii have remained extraordinarily high whenever its newly released low fares sell out.

If you want to fly into one island and back from another, you can purchase one-way flights for about half the roundtrip price and combine with $29-$59 interisland Southwest flights. 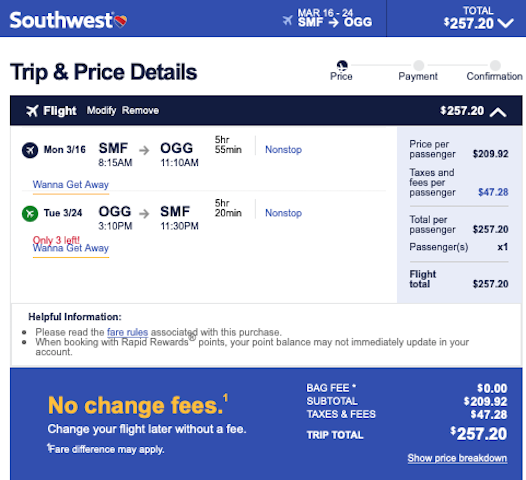