Flying from New York to Paris has never been cheaper in recent memory. We regularly see sale fares for under $300 roundtrip — even on major carriers. And there's even more competition coming next summer. Starting in June 2020, two french airlines, Corsair, and French Bee will begin new nonstop service between Newark (EWR) and Paris-Orly (ORY) airport. Intro fares are as low as $269 roundtrip, which is an amazing price for late June travel.

2 New Airlines to Fly Between Newark and Paris

Both Corsair and French Bee will commence new nonstop service between Newark (EWR) and Paris-Orly (ORY) on June 10, 2020. Daily service will be available on both carriers, though Corsair doesn't have flights on Tuesday or Thursday during the first two weeks of service. Corsair currently has flights from both Miami (MIA) and Montreal (YUL) to Paris and French Bee serves both Paris (ORY) and Tahiti (PPT) from San Francisco (SFO).

With the 2 new airlines, there will now be a total of 9 different carriers flying between the New York area and Paris. This was briefly as many as 10 airlines competing between these major metropolitan markets, but just last week XL Airways stopped selling tickets and looks to be on the brink of collapse.

Which Airlines Fly Nonstop Between New York and Paris?

With so much competition, we'll likely continue to see excellent prices for flights between New York and Paris. To see current fares we've found, have a look at our fare pages for the following city pairs:

If you'd like to be notified of special sale fares and price drops, make sure to sign up for FREE airfare alerts.

Current fares on the new Corsair and French Bee routes are much lower than the competition for June 2020 travel. Each airline has different rules and restrictions, but I'll go over the important details below.

Along with the current fares on the new flights to Paris, I'll also include some links for some great fares on existing routes between the New York area and Paris, which are mostly available for travel between late November and March, excluding peak holiday travel in late December and early January.

These fares are unadvertised and prices may jump at any moment.

New Nonstop Service from Newark to Paris in June 2020

Newark-EWR to Paris-ORY $1,398 roundtrip in Business Class on La Compagnie

For more deals to Paris on all airlines from all over the U.S. and Canada, have a look at all of our fares to Paris-Charles de Gaulle (CDG) and Paris-Orly (ORY).

Both Corsair Eco Basic and French Bee Basic fares include a normal carry-on bag plus a personal item. Checked bag fees start at $45 each way on French Bee when purchased during booking. Corsair charges a $77 each way bag fee for Eco Basic fares, but it is almost always cheaper to upgrade to the Eco Classic fare, which includes one free checked bag.

The lowest fares on both carriers do not include advanced seat assignments and seats will be assigned at random upon check-in if you don't want to pay more. You may pay a fee to choose a specific seat.

As an example, I found tickets on French Bee's new service departing Newark EWR on Thursday, June 11, returning from Paris ORY on Wednesday, June 17, for $269 roundtrip. This fare is currently much lower than the competition for travel in June. 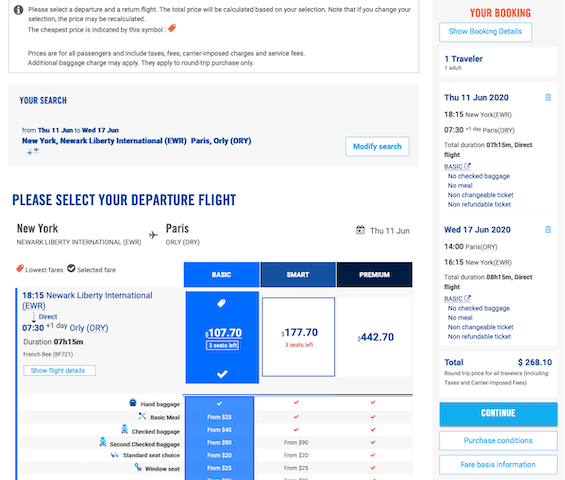