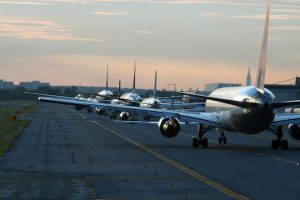 Summer Swell: How to Deal with Airports During Peak Travel Season

The summer swell is almost upon us, and, for the tenth year in a row, peak seasonal travel in the States is on the up-and-up. This year a record-setting 257.4 million passengers are expected take to the skies between June 1 and August 31 – an increase of over 3.4 percent over last year's largest ever totals. And to pile on, the grounding of Boeing’s 737 MAX airplanes across the globe isn’t alleviating any stress on either the airlines or consumers during the year’s busiest travel period.

Avoid Stress at the Airport this Summer with these Tips

While the crowds can be daunting, they shouldn’t put a damper on the summer escape you’ve been looking forward to for months. Beyond the overly recited but very important "arrive early" approach, there are several other tips to slightly subdue the stress during the season.

From apps to alternate airports here are a few options to take the sting out of traveling during the summer swell.

It might turn out that your phone will be your best travel partner this peak travel period. Beyond, the basics like taking photos and mobile check-in, several free travel apps can help with preparing for the swarms of seasonal travelers making their way to airports across America.

Phone applications like the TSA’s very own MyTSA and MiFlight use crowdsourced and historical data to provide users with semi-accurate wait times and how busy the airport is likely to be during the day of your flight. If downloading an app is a task too tall or your phone's storage stacked, try visiting your departure airport's website as most will post updated times throughout the day. Since other travelers provide some of the data, information may vary; so use the timeframes as rough guesstimates because security lines are notoriously fluctuant.

Downloading your carrier’s dedicated app can also be a helpful tool in your airport arrival arsenal. These apps will provide you with gate numbers, terminal information, and “real-time” estimates of updated departure times in case of delays.

If your travels are taking you overseas this summer don’t extend your journey home any longer than needed by waiting in a twirling long customs and immigration line upon your arrival. Download the free official CBP Mobile Passport App to your phone and enter in your passport details when arriving at over 25 U.S. airports and you’ll be able to skip ahead to the dedicated Mobile Passport Control line for an expedited arrival in America. Find out more here.

Try for the First Flight Out

As a self-diagnosed non-morning person, waking up at 3:30 am to head to the airport is not at the top on my summertime to-do list. But if you’re willing to set that alarm (or two) early enough to catch one of the first flights out in the morning, you’ll be in much better shape avoiding delays and hiccups that come with the peak travel period.

Flights departing first thing in the morning are the most likely to be on time due to the airplane’s arrival from the previous night. Mitigating most worries of your aircraft arriving late, delayed, or not there at all. This also works twofold with cabin crew. More often than not they’ll be starting their shift on the first flight out so you’ll also avoid delays from personnel swaps or staff that have worked their allotted hours for the day.

Fly Nonstop and Use Secondary Airports

Sometimes it’s not possible or costs quite a bit more, but if given the option to purchase a nonstop fare over a cheaper one that requires a connection – spend the extra money this season and save some sanity instead.

You might have to pay a premium for it, but avoiding a tight connection while airports are at full capacity or arriving in a major hub airport (ahem DFW & EWR) only to find out there’s a log jam on the tarmac is no way to kick-off your summer holidays. Not to mention the possibility of your checked luggage getting backlogged or lost mid-journey due to the sheer number of passengers.

If you live in or near a market with a secondary airport like Chicago-Midway, Houston-Hobby, Oakland, or Burbank, your best bet might be departing from one of those this summer. Often these Southwest heavy airports price match fares that airlines are offering from neighboring larger airports but with a quarter of the passenger volume. Not only will you be avoiding the larger mobs at check-in and security, they’re often more conveniently located to downtown than their crowded counterparts.

Related: The Surprising Place You Can Now Get TSA PreCheck

If you’ve been on the fence on signing up for TSA Pre-check program, this summer’s record-setting stats might set you over the edge. With more and more credit cards like the United℠ Explorer Card, The Platinum Card® from American Express, and the Citi® / AAdvantage® Executive World Elite™Mastercard® covering the cost of the program (plus Global Entry), now might be the best time for you to make the commitment. If you don’t currently have a card that covers the $85 fee for a five-year membership, think of it as paying $17 a year to skip ahead on the hour-plus airport security waits.

Available at over 200 airports across the U.S., once signed up for Precheck you'll no longer have to take off your belt and shoes or have to remove your liquids or laptops. Allowing for extra time to grab a cup of coffee on the way to your gate instead of playing Tetris in the terminal with your carry-on bag fitting everything back into place or still stuck in a snaking security line. If you’re ready to sign-up, check the IdentoGO website here and see where the nearest enrollment center is for you. It could be as close as at your neighborhood Staples store down the road.

Mid-Week Instead of Peak

We’ve previously mentioned the two cheapest days of the week to fly, and it’s no coincidence they’re also the days when load factors at airports are the lowest. By flying midweek on a Tuesday or a Wednesday as opposed to the favorited Friday and Sunday departure days you should see a significant drop in security wait times and if you’re extremely lucky, possibly an empty seat next to you on your flight. But as far as the estimates are shaping up for this packed summer season – probably not.