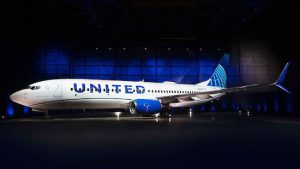 United Airlines' golden days are behind them, and while customers might have been feeling that sentiment for a while, the carrier has made it official today with the reveal of its new aircraft livery.

United Focuses on Blue in Next Livery

The Chicago-based carrier is ditching the golden accents inherited in the Continental merger with a new focus on cool blue hues. Gray will serve as a secondary tone on the belly of the fleet's new paint jobs, and the United word branding will get a font size upgrade and become more prominently displayed on the sides of the aircraft. On the tail, the easily recognizable "Continental" globe logo will remain the featured icon, but its golden latticework replaced by a Sky Blue highlight. To emphasize United’s all-in focus on blue both wingtips and engines will also be covered in the carrier’s signature United Blue. To provide a pop against the new cool tones the bulk of the fuselage, nose, and horizontal stabilizers will remain white. When first teased, United stated, “expect evolution, not revolution" regarding the new paint jobs, and that's how it has panned out.

In my opinion, there’s nothing new or remarkable about the refreshed design, and to me, it looks likes it's a few photocopies removed from several current JetBlue liveries. Especially regarding the color switch to blue on the engines and wingtips. I’d expect from a far distance the two rivals aircraft might become easily confused by the untrained eye.

So when will this new look take to the sky? The rollout begins today. Currently, there's just one Boeing 737-800 with the newly kitted out paint job, but United claims that on average their aircraft receive a new paint job every seven years. So with that time frame in place, the new look should be implemented fleetwide around 2026.