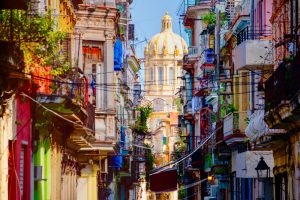 New Restrictions on Travel to Cuba

On Wednesday, the Trump administration announced plans to tighten restrictions on travel to Cuba, essentially reversing policies implemented by the previous administration. Under new rules, travel will now be limited to family visits in an effort to crack down on what the administration sees as “veiled tourism.” This will surely have a major impact on airlines, cruises, and tour operators currently operating between the U.S. and Cuba, not to mention American tourists interested in making the trip.

No details have yet been given as to when the new rules will take effect, so if you’ve been considering the trip, better hurry. Here’s a look at current fares to Havana, Santa Clara, Varadero, and Santiago de Cuba from all over the U.S.

As far as consumer protections go, Americans tend to get the bare minimum should something go wrong while traveling on a domestic flight. But it’s a different story entirely if departing from Europe, even as a U.S. citizen on an American-based carrier. Or at least, it’s supposed to be different, assuming U.S. carriers are following European Union law, which, apparently, they are not. According to a new study by AirHelp, a site that helps passengers file claims for delayed or canceled flights, more than 25% of valid claims against U.S. carriers were wrongfully rejected from 2016-2018.

Delta tops the list of offenders, rejecting 32% of all claims, followed by United at 23%, and American Airlines at 22%.

Americans are covered under Flight Compensation Regulation 261/2004, or more commonly known as EC 261, which allows for up to $700 in compensation for delays of more than three hours or incidents of denied boarding, excluding bad weather or political unrest. Claims may be filed up to three years after the incident.

Counter to Norway’s reputation as a forward-thinking nation, Norwegian Air has some pretty regressive ideas on how women should dress in the workplace. One rule in particular made headlines this week, requiring female flight attendants to wear heels at least two centimeters tall. A doctor’s note must be provided by anyone who wishes to do the job in flats, and that note must be updated every 6 months should they wish to continue.

A Norwegian Air spokesperson told The Independent that flats are acceptable while inflight but high heels are required while boarding passengers and once they exit the plane.

If you’ve ever embellished the details of your trip to friends back home, you’re not alone. According to a survey from Jet Cost, 14% of Americans have lied about their vacations.

So what exactly are people lying about? The most common fibs are weather-related, with travelers claiming it was sunnier than it actually may have been. People also tend to exaggerate the quality of their hotel, how much sightseeing they did, how much money they spent, and how much they did or did not drink. Of the 4,000 travelers surveyed, 10%  even confessed to posting fake vacation photos to social media.

Additionally, 68% admitted to saying they had enjoyed their holiday more than they did, while 52% said that they would never tell anyone if their vacation had been a disaster.

Intro image by Kamira via Shutterstock