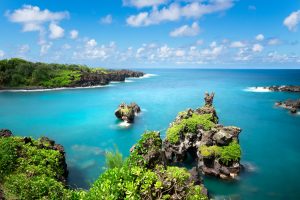 On Monday, Southwest made its long awaited entrance into the Hawaiian market with nonstop flights starting at $98 roundtrip from the West Coast. For now, nonstop service is only available from Oakland and San Jose to Honolulu and Maui, with connections available from other cities.

Those specially priced introductory fares sold out quickly, but stay tuned for upcoming sales from Southwest, along with price matching from competing airlines, or so we hope.

Look for Southwest to expand its Hawaiian service, with Lihue expected next.

Just in time for March, the US State Department has issued travel advisories for two Caribbean destinations especially popular among spring breakers. Both the Bahamas and Turks & Caicos have received a Level 2 warning by the State Department, and visitors are urged to exercise increased caution. According to the Bahamas advisory, burglaries, armed robberies, and sexual assault is common even in tourist areas, with most crime occuring in New Providence and Grand Bahama islands.

For a little perspective, other countries currently with Level 2 advisories include Germany, the United Kingdom, Spain, the Netherlands, Italy, and Mexico.

The Biggest Airlines in the World

Taken a flight recently? If so, odds are that you were aboard one of just 20 airlines. According to flight data and analytics provider OAG and Business Insider, these airlines offer the most seats overall considering fleet size. Interestingly, of the 20 listed, 5 of them are American carriers, including the very top spot with 256,928,663 seats across 956 aircraft. Any guesses who made the top of the list? Peruse the list in its entirety here.

Calling all women artists! If you’re looking to create something large scale, United is offering up two of its aircraft to use as your next canvas as part of its #HerArtHere contest. Artists can choose to reflect the spirit of either of United’s two major regions, California and New York/New Jersey, though entrants can be based anywhere in the U.S.

Three winners will be chosen for each region by April 9. All six finalists will receive their own gallery showing along with 100,000 United MileagePlus award miles, and their work will be featured in United Club and United Polaris lounges. A public vote will take place on April 19 to select a final winner from each region.

This contest is open to all cisgender, transgender, woman-aligned or non-binary artists residing in the U.S. Put together a short video along with a portfolio or examples of your art and submit at https://hub.united.com/her-art-here-submission by March 24. 2019.

Will JetBlue Soon Offer Flights to the UK?

JetBlue continues to drop hints at US-UK service. The latest comes as the carrier mulls a decision to convert a 2016 order of  Airbus A321neo aircraft into long range models. JetBlue staff have been told to expect a "chat about JetBlue's vision and strategy" to take place on 10 April, according to the BBC.

"Potential routes to Europe could provide us an opportunity to grow our focus cities of Boston and New York as we consider the best use of our aircraft from a margin perspective in those cities," said a spokesperson for JetBlue.

At Southwest, Maintenance Issues Continue to Cost the Airlines Millions

While dirt cheap Hawaii flights have received most of the attention this week, so too have ongoing maintenance woes at Southwest. According to its mechanics, Southwest has been negligent in properly maintaining its fleet, with many flights pulled from service over concerns that safety standards are not being met. Meanwhile, the airline accuses the mechanics union of inventing problems to sway contract negotiations.

According to USA Today, Southwest has other carriers beat when it comes to delays and flight cancellations over the past several weeks, exceeding 100 flights on most days. Yikes!

Star Wars fans, rejoice in celebration! Disney’s latest Star Wars themed expansion will open on May 31 in California’s Disneyland park, ahead of original estimates, with Disney’s Hollywood Studios in Florida opening its version on August 29.

While not entirely ready, Disney decided to open Galaxy’s Edge in two phases to accommodate the summer rush, according to DisneyTouristBlog. Early visitors can hop aboard the Millennium Falcon, explore village life on planet Batuu, and enjoy cantina-like dining. Phase two is expected to be completed towards the end of 2019 and will include Star Wars: the Rise of the Resistance, an outer space battle between the Rebel Alliance and the First Order.