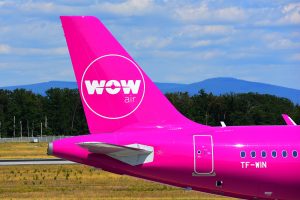 "After a challenging year, WOW air is now restructuring and simplifying its operations to return to its roots as a profitable ultra-low cost airline, while discussions with Indigo Partners progress,'' said WOW in a statement.

Also on the chopping block is WOW's New Delhi service, which, you may recall, hasn't even been in service for a full month.

This is part of a larger restructuring plan that involves cutting back routes and scaling down its fleet,  including the Airbus A330s used for long-haul flights, as the carrier looks to cut a deal with Indigo Partners, owner of Frontier Airlines and Hungarian budget carrier Wizz Air.

WOW Air investors have until January 20 to support the deal. That sounds promising but so did a similar arrangement last month with Icelandair which was ultimately scrapped.

As negotiations continue, it isn't entirely clear what of WOW's East Coast routes will remain, if any. The booking schedule for Pittsburgh departures drops off after mid-January, and PIT passengers report having received cancellation notices. It's a similar story at Orlando where flights just began last week, though are no longer bookable after mid-January. Meanwhile, service from Vancouver was scheduled to begin next June, but the city appears to have vanished from WOW's site. What happens next? Stay tuned!