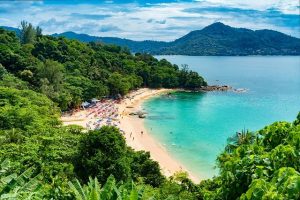 Singapore Airlines is adding its 5th U.S. city and 4th nonstop flight between the U.S. and Singapore. Nonstop flights from Seattle to Singapore begin next September. Intro fares on the nonstop flight start from $640 roundtrip. Connecting flights to other cities in Southeast Asia are as low as $489 roundtrip.

Singapore Airlines is often ranked as one of the best airlines in the world and has a 5-star rating on Skytrax. This new flight from Seattle will allow those in the Pacific Northwest to enjoy a quicker route and top-notch service to Southeast Asia.

In a press release, CEO Mr. Goh Choon Phong stated, “Our new non-stop flights to Seattle are another demonstration of our commitment to expand our operations in the important US market and grow our network reach. The new services will also further strengthen the Singapore hub by providing customers faster and more convenient connectivity from key markets such as Southeast Asia, South Asia and Australasia to North America.”

The new nonstop flight begins September 3, 2019, and will operate on Tuesdays, Thursdays, and Saturdays. Flights will depart Seattle (SEA) at 10:40 am, arriving in Singapore (SIN) at 5:25 pm, the following evening. Flights depart Singapore at 9:25 am, arriving in Seattle at 9:05 am, on the same date. All times are local, which allows for the time travel scenario on the return flight.

These flight times allow for many same-day connections to other locations in Southeast Asia and India. When returning to Seattle, it may be required to have an overnight layover in Singapore in order to catch the morning flight out of Singapore. For this reason, many of the connecting flights require departures from Seattle on Tuesdays, Thursdays, and Saturdays, with return travel starting on Mondays, Wednesdays, and Fridays. Most routes to/from India do not require an overnight connection in Singapore as the flight from India to Singapore is an overnight flight.

If you have a long layover in Singapore, there is a free city tour offered by the Singapore Tourism Board, and Singapore also offers special hotel rates that you can add to your flight.

Tickets went on sale yesterday, and intro fares are very competitive to many cities across the region. These fares are not advertised and prices may jump at any time. If you want to secure a great price on this top airline, book your fall 2019 trip early. While other airlines may offer similar pricing on occasion, it's very rare to see Singapore Airlines with pricing this low.

A sample of intro fares include:

There are other new connecting routes available to other cities in the region as well. Singapore Airlines also serves Singapore (SIN) nonstop from Los Angeles (LAX), San Francisco (SFO), and Newark (EWR), and has fifth freedom flights from New York (JFK), and Houston (IAH).

As an example booking, I found seats departing Seattle SEA on Thursday, September 5, returning from Phuket HKT on Wednesday, September 11, for $489 roundtrip.

If you're looking for a hotel near Changi airport in Singapore for an overnight layover, check out these options on TripAdvisor. roundtriproundtrip
All products and services mentioned on Airfarewatchdog are independently selected by our team of expert travelers. If you buy something through our links, we may earn an affiliate commission.