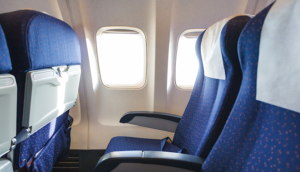 Wild Pitch: US Airlines With the Most Legroom in Economy... and the Least

Finding it harder to get comfortable at 35,000 feet? You’re not alone. If you’ve flown recently, you’ve probably noticed that not only have amenities like free cabin baggage and blankets disappeared, so has your legroom.

To increase profits, airlines are reconfiguring their cabins to cram in as many seats as possible. And that comes at the cost of your comfort (and knees). That space needs to come from somewhere, and the most common way to find it is by reducing the seat pitch throughout the airplane. For those who aren't familiar with the term, "seat pitch" is the distance from the back of your plane seat to the seat in front of you. While reducing seat pitch has been going on for years, the recent trend of airlines moving towards Basic Economy and the low-cost carrier model has undoubtedly put a squeeze on customers.

A Guide to Seat Pitch on US-Based Airlines

• Airlines with the Most Legroom

• Airlines with the Least Legroom

While only a couple decades ago, the average seat pitch was around 34-35 inches, nowadays, the new normal is about 30-31 inches. If you think that’s a tight fit, try out one of the ultra-low-cost carriers that really encroach on your personal space with a pitch of only 28 stingy inches.

Using airline websites, and seat maps from our sister-site, SeatGuru, I’ve created a helpful list of which U.S. airlines offer the best legroom in coach and which offer the least. While pitch will vary by aircraft, this guide will let you know which seats and planes will get you to your destination the most comfortably. 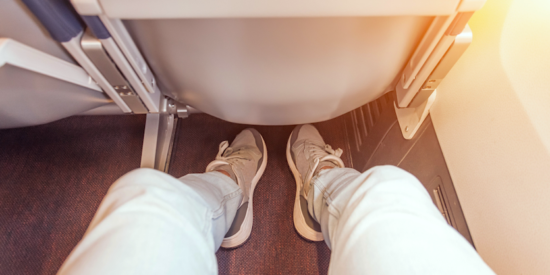 JetBlue touts itself as having the most legroom of any US airline with a pitch of 32-33 inches. While that is still generous among most American carriers, just a few years ago, JetBlue was offering an industry-leading 34 inches on all of its A320 airplanes. The retrofit, which finished recently, squeezed 12 more seats into those planes shaving the pitch down to 32 inches. JetBlue’s A321 jets, used mostly for transcontinental flights, are the models that feature 33 inches of pitch in economy. For those fliers willing to shell out the extra money, JetBlue's "Even More Space" seats offer the most overall legroom on any US carrier ranging from 37-41 inches of pitch, allowing enough room to stretch your legs out like you're in a yoga class.

Southwest only operates a fleet of Boeing 737’s, keeping its seating charts reasonably similar among all its planes. The Boeing 737-MAX (currently grounded) and 737-800s, offer 32 inches of pitch, while the 737-700 offers a 31-inch seat pitch. Since there is no pre-assigned seating and no upgrade options on Southwest flights, all economy seats are nearly identical. Exit row and bulkhead seats will provide extra legroom, sometimes even up to 39 inches of seat pitch. However, unless you are in the front of the line for the first boarding group, you can kiss the chances of getting those highly coveted seats goodbye. For tips on getting the seat you want on your Southwest flight have a look at our guide.

Before its merger with Virgin America, Alaska mainly operated a fleet of Boeing 737 planes fitted with 31-32 inch pitched seats. Post-merger, Alaska has acquired 67 Airbuses from Virgin that offer 32-inch pitch in standard economy. Alaska plans to refit these Airbuses with new seats, carpets, and lighting, which means the legroom might also change, and usually, it’s not for the better. Seats with legroom of 36-40 inches are available in the forms of bulkhead and exit row seats, and upgrades to those seats will cost additional.

Related: U.S. Airlines with the Widest Seats in Coach American Airlines operates a wide range of aircraft, so it will be tough to pinpoint exactly how much pitch you will get in your economy seat unless you do a little research on which plane layout you'll be flying on (which you can find here). For the most part, it will be between 31-32 inches, but most likely, 31. Unless you are flying an Airbus A319, Boeing 757, or 737 MAX (currently grounded), then you can expect a tighter 30-inch pitch. Luckily, American reversed its decision to fit the newer 737 MAX's with a measly 29-inch pitch following public outcry and complaints from employees. But don't worry about flying those as they are still sitting parked waiting for FAA approval to fly again. By purchasing a “Main Cabin Extra” fare, you can expect to receive two to three more inches of legroom (33”-36”) depending on which aircraft you are traveling.

If you are flying United, you can expect a 31-inch pitch across most of its Boeing planes. The exceptions being routes operated on its Airbuses and some 737 aircraft that slim down to 30 inches and 787-8 Dreamliner service, which inch you up to 32. United seems to be a bit more generous than American when you pony up the cash for its “Economy Plus” option. On average, you will receive an extra three to four inches of legroom, leaving you with 34-37 inches of pitch. If you are planning a trip on United Airlines or already have a flight booked and know which aircraft will operate on that route, you can check here to see seating specifics.

Much like American, Delta operates a broad array of aircraft, which will vary its pitch per airplane. Most fliers can expect a 30-32 inch pitch while traveling on Delta, with the 31-inch pitch being the most common of its fleet. Delta Comfort+ seats offer customers a couple of extra inches with 34-35 inch pitches. On its new Airbus A350s, those willing to pay extra for "Delta Premium Select" will get a generous 38-inch pitch. Flights on A319s, A320s, A321s, and Boeing 757s are the ones you'll want to avoid, as those come cramped with the 30-inch pitch layout.

Hawaiian operates a fleet with a mix of Airbus A330, A321s and Boeing 717s. On the Airbuses, you can expect 31-32 inches of seat pitch. While on the smaller Boeing 717s mostly used for inter-island service, travelers will get 30 inches. For passengers wanting to stretch out a bit more on their journey over the Pacific, Hawaiian offers “Extra Comfort” seats. These extra-cost seats are available on Hawaiian’s Airbus A330 and A321 flights and offer a seat pitch of 36-inches. Budget carrier Allegiant Air offers a below-average 30 inches of seat pitch on all of its planes. Allegiant also provides the option to buy up to Legroom+, which will get you an additional 4 inches of pitch. Legroom+ seats are located in the first-row bulkhead section of the plane and the exit rows over the wing. All seats on Allegiant do not recline, so in addition to a tight pitch, you’ll also have to nap upright.

No surprise here, Spirit, known for its nickel and diming fees, scrimps out on its legroom with an industry-low 28-inch pitch on all its planes. Similar to Allegiant, Spirit’s seats are “pre-reclined,” which is just industry speak, meaning they have no recline ability at all. Spirit’s “Big Front Seat” option will get you a 36-inch pitch and sits you up in the front of the plane, but it will also cost you a lot more and negate any savings you thought you’d get by flying on Spirit in the first place.

Ultra-low-cost carrier Frontier also tries to cram you in with just 28-31 inches of pitch on its Airbuses. Travelers can expect the lower end of that figure, though, as only a few older A319s offer the 31-inch pitch, and Frontier is in the process of phasing them out. Frontier has put in an order for 100+ additional A320neo aircraft from Airbus, which will also roll out of production with a measly 28-29 inch pitch on its pre-reclined seats. For an extra charge, you can buy your way into more legroom by purchasing “Stretch” seats on Frontier. Rows 1-3 have a 36” pitch while lucky Row 13 over the wing will give you 38 inches to stretch across.

Minneapolis-based Sun Country is in the process of transitioning into an ultra-low-cost model, and, in doing so, the airline is increasing the number of seats on its 737-800 aircraft. To fit these new 18 seats, the airline will be shrinking the average seat pitch to a much tighter 29 to 30 inches. The carrier will keep some locations with a 33-inch pitch on those airplanes, but they will most likely require an additional fee to select. As for now, the 737-700 aircraft that Sun Country operates will remain the same, with a 31-32 inch seat pitch in coach. So depending on the route and if the plane has received the retrofit, seat pitch can vary from a squished 29-inch to a much more reasonable 31 to 32 inches of legroom.

Related: Do You Have to Switch Seats on a Flight If Someone Asks?