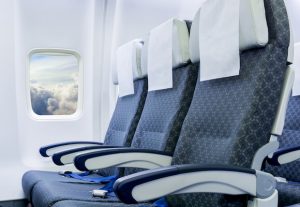 U.S. Airlines with the Widest Seats in Coach

Does it seem like airlines are putting your personal space at a premium? Most have. The average airline seat width used to be around 18 inches. While some still do offer that you'll find a lot more scaling down into 17 inches and under.  It's become a problem, so much so that even Congress got involved last year with its SEAT Act of 2017. This bill is in the first stages of the legislative process, but if passed (which is unlikely) it will assign the FAA the responsibility to set a minimum seat width and pitch on U.S. carriers. The Act’s primary objective is to improve safety on flights in case of an evacuation emergency, but halting the shrinking seat sizes will also be a big win for consumers and their comfort.

A Guide to Seat Width on US-Based Airlines

While I’ve listed airlines with the best legroom in economy here, it’s not only your knees getting squeezed in; your waistline is losing some real estate too. Probably not in the way you wished, either. While seat pitch (the distance from the back of the seat in front of you to the back of your seat) has a wider variety and can be adjusted by the airline, seat width (armrest to armrest) is a usually a set standard dimension and won’t vary as widely across the airplane. Airlines are limited to what the seat manufacturers offer, but that doesn’t mean they have to cram as many seats across as possible.

With information posted from the airline web pages and our sister site SeatGuru, I’ve gathered up some measurements to get to the bottom of which seats offer the most space for yours. Here’s a guide to which U.S. airlines will give you that extra hip room in economy and which ones to avoid. Hint: Boeing 737s. The broader fuselage on many Airbuses allows for those extra inches on seats that can add a world of comfort over a four-hour flight.

JetBlue: Not only does JetBlue boast one of the widest seats with an average of 18 inches across on its A320 & A319’s it still maintains the most legroom of any U.S. airline when it comes to seat pitch too (32-33”). With live TV entertainment on each seat back JetBlue provides the most consistent and comfortable chair out of any US-based airline.

Hawaiian Airlines: Customers flying on Hawaiian Airlines will be happy to know that they'll still enjoy an 18-inch seat width across most of the airline's entire fleet. The exception being the new Airbus A321NEO, which offers a slimmed down 17.7” seat. Although NEO offering is a bit tighter, every seat will have USB charging and not as much wear and tear as older seats.

Frontier Airlines: This ultra-low-cost carrier has a surprising 18 inches of width across its line-up of Airbus aircraft. While seat wideness rank toward the top of all U.S. airlines, the pitch that Frontier offers tallies amongst the lowest.

Delta Air Lines: Much like the other legacy carriers Delta owns a mishmash of different aircraft amongst its entire fleet. However, this doesn’t stop the airline from providing the overall best seat width offerings amongst the big three. All of Delta’s variations of Airbus planes are fitted with an 18-inch wide economy cabin seat. Things aren’t so uniform when it comes to its Boeing planes though. The common 737 and 757s have a smaller 17.3-inch width, but on the 767 and 777, you'll sit prettier with a 17.9 - 18.1-inch layout. Delta's regional partners like SkyWest and Compass that mostly serve smaller connecting airports offer Embraer aircraft with a generous 18.3” width and Bombardier planes with an inch smaller frame of 17.3” seats.

Spirit Airlines: While you can disagree with other business aspects from the controversial Spirit Airlines, they do offer an above average 17.75-inch seat width across the airline’s all-Airbus fleet. While the width of the seats is reasonably generous, keep in mind that "pre-reclined” seat pitch of only 28 inches is not.

Southwest Airlines: If flying Southwest, aim for the newer Boeing 737-800 MAX planes. They feature what Southwest claims is the USA’s widest economy 737 seats, with a width of 17.8 inches. Otherwise, you can expect a 17-inch spread across the fleet of its older 737 variations.

Alaska Airlines: Alaska offers an average seat width of 17 inches across its Boeing planes; but with the acquisition of Virgin America, seats on it’s inherited Airbus aircraft features a much nicer 17.7-inch width. If you happen to be on a short-hop Embraer, you'll get treated to an 18.25" seat width.

Allegiant Airlines: Another airline comprised of all Airbuses*, however, Allegiant's seats are slimmed down compared to other ULCC competitors to an average of 17 inches wide, with some select seats tightening the belt at 16.5”. (*Allegiant also operates McDonnell Douglas MDs, but Airbuses will replace them by the end of November 2018. They also feature an average of 17-inch seat widths. Travel should be avoided on those models due to a history of mechanical issues).

United Airlines: United also runs a mixed fleet of aircraft, but they skew heavily toward Boeing manufactured aircraft. Similar to Delta, you can expect the 737 and 757s have a smaller 17.1-inch width, but with United, they also squeeze you in on their 777s with a 17 – 17.1"diameter on domestic service (International flights tend to have about an inch wider though). Flying on a newer 787 Dreamliner will only bump you a measly fraction of an inch up to 17.3, not so dreamy after all. As far as Boeing operated flights, hope for a 767 as those have United’s best offerings at 18.5-inch seats but are rarely used on domestic routes. United’s airbuses don’t fare too much better. The A320 models have been pared down to a flat 17-inch width, and while the A319's have United's best domestic offering of 17.7 inches, there are only 67 of those in service out of a fleet of over 750 airplanes.

American Airlines: With such a variety of planes in its fleet, it's a lot harder to pin down what exact seat width you'll receive on your AA flight. Overall flying on an Airbus will get you a smidge more room on American ranging on average from about 17 to 17.7, but on several versions of the A320 and A330, there are a handful of seats with a tight 16.3 seat width. Avoid flying the new 737 MAX and 737-800 planes from American. Alongside a dismal 30" pitch, they also sport seats that can have diameters as tight as 15.9 and 16.6 inches. While the average seat size you'll get on American is a smidge under 17 inches, try for the older Airbuses or 767s as they tend to have the most cushion coverage.

Sun Country: According to Sun Country's website, its narrowest coach seat width is 16.1 while its widest is 17.3. So if we pin it somewhere in the middle, you can expect a below average 16.7-inch seat width’s amongst the airlines fleet of Boeing 737 aircraft. To make matters worse, Sun Country is refitting their planes to cram in more seats (from 168 to 183) and eliminating the first-class cabin. While this move will mostly impact seat pitch, it will also remove a buy-up option for a wider seat so that every single seat on the plane will have a below industry average.

When it comes to seat width on US-based airlines, it’s more about the type of plane you are flying on rather than the carrier. Generally speaking, Airbuses will give you that little bit of extra room around the hips, while the narrow body Boeings will have a slimmed down seat offering. The larger international and cross-country serving aircraft tend to have the most variation amongst the fleets. They can offer some of the best seat widths but also the tightest depending on how jam-packed the airline chooses to configure them. If you aren't sure what to expect on your next flight, you can always enter your flight information into SeatGuru.com for a detailed assessment of seat layouts, pitches, and widths across all major airlines.

Related Article: Wild Pitch: U.S. Airlines With the Most Legroom in Economy... and the Least

Header image by Aureliy via Shutterstock.com