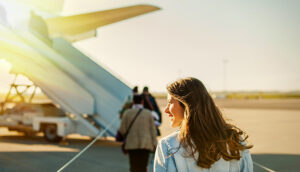 How Using Alternate Airports Can Slash Your Travel Costs

There are so many variables to consider when searching for the lowest fare. It’s easy to overlook the importance of including alternate airports in your search. Airports may only be a few miles apart, but sometimes the difference in price can be several hundred dollars.

Of course, there are other factors that can sway your decision, but, for most, price tends to be the biggest.

Save Money by Searching Smaller Nearby Airports

Anyone who frequently travels between New York’s three major airports to Southeast Florida probably already knows to shop around.

Let’s say you need to get to West Palm Beach at the last-minute, and United has $189 nonstops from Newark, Delta lists $193 nonstops from LaGuardia, and JetBlue shows nonstops at $209. But if you were to make your way to Trenton via New Jersey Transit or by some other inexpensive and easy means, you could fly nonstop to West Palm Beach for just $77 roundtrip on Frontier.

To Fort Lauderdale, we found a JetBlue flight from JFK for $169. From Newburgh, a flight to Fort Lauderdale on the very same dates was going for $135. Again, maybe that’s not ideal for every New Yorker, but if you live north of the city, it’s certainly easier than getting to JFK.

Another example? We spotted a Delta flight for $207 round-trip from New York’s JFK to Atlanta Hartsfield. Meanwhile, Southwest had a $156 fare from Long Island’s Islip Airport.

Islip may not be the most convenient for every New Yorker, but with shorter security lines and cheap parking, it’s certainly less hassle. And best of all, Southwest still includes two free checked bags, unlike Delta.

And when airlines suddenly drop fares to particular destinations, it’s often the smaller secondary markets that are the best value, not the major hubs. Case in point, in one of the many Australia flash sales to have appeared in the last year, Delta listed August, Georgia to Sydney for $916 roundtrip, with flights from nearby Atlanta priced at $1,800.

The same logic applies to flying to a particular city or region. If you’re searching for flights to London, of course, check Heathrow, but don’t forget to look at alternate airports like Gatwick and Stansted. Headed to Paris? Don’t forget Orly. True, there aren’t as many options as CDG, but what is available may be much cheaper.

Flying to Tokyo? Everyone knows to look for flights to Narita but check Haneda, too. Aside from being much closer to the city, it’s often much more affordable.

When hoping to find the rare deal in peak travel periods like summer or winter holidays, you may find it helpful to broaden your search. For example, if you have your heart set on summer in Sicily, but fares are sky-high, try searching for flight deals to Milan or Rome and consider the train or bus to make up the rest of the trip to Sicily.

No matter if you’re flying from or to an area, checking prices across multiple airports can help you save a good bit of money, plus you may come across flights that are scheduled at more convenient times or are nonstop, and at alternate airports that are far easier to navigate than crowded hubs.