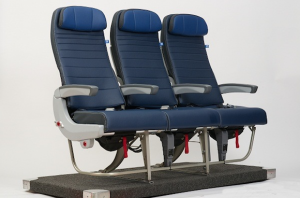 Seat Redesign and Not for the Better

I normally try to avoid writing totally negative air travel posts, because, obviously, I want people to travel and fly. But this topic cannot be avoided, and I'll try to suggest some remedies.

The problem, as the Wall St. Journal's Scott McCartney points out in this article (you may need a subscription to read it): "park bench" airline seats that have much thinner padding that previous models (they're as hard as sitting on a park bench in other words—although I've likened them to a church pew in the past posts). And because they're thinner, the airlines figure they can move rows of them closer together, which means more seats per plane.

Along with other design tweaks, such as moving the seatback pocket higher up, you'll have about the same amount of knee room as with the more generously padded seats. But more seats per plane equates to more fighting for overhead bin space, because they're not adding more bins, and longer lines for the lavs. They're even making the lavs smaller, and United, on some planes, is eliminating one of the four economy class lavs, all to cram in more seats.

Not only are these new seats thinner, but, as the Wall St. Journal's graphic shows, the bottom seat cushion is shorter. The graphic shows a person sitting with the front edge of the cushion resting just under the knees. But unless you have very short thighs, that's not what happens. The front edge actually digs under most people's thighs somewhere in the middle, and after a few hours of flight, it hurts. It really is painful.

I needn't tell you that the airlines are doing this to save fuel (lighter seats means less fuel burned per flight) and to cram more people into their planes. In their defense, the in-flight entertainment systems we all love, and the wiring for 110-volt outlets at all seats, add considerable weight to planes, so they're compensating by making the seats lighter.

So what to do? There's not a lot, but here's what I've come up with so far:

The new seats might be tolerable on an hour-long flight, but six hours? No can do. So break it up, if possible. Flying JFK to LA? Change planes in Dallas or Chicago, preferably with a two-hour connection. That gives you time to de-contort your body. You can even make two connections, and often those connecting flights are cheaper than nonstop.

Where possible. They haven't installed the torture seats yet and they have more legroom than the other airlines. American Airlines hasn't installed many of them either, yet.

3. Bring your own seat cushion.

I'm not kidding. People are doing this, just like they bring those neck pillows. They're mostly used for office chairs and to add padding to car seats, but they work for airplane seats too. Just make sure it's not too big (most airline seats are just 17-18 inches wide). This ThermaRest model is designed more for camping and stadium seats, but it's easy to carry and cheap. This model from Tempur-Pedic, the mattress people, measures 16 x16 x 2 inches and although it's pricey it seems to get positive reviews.

4. Use miles to upgrade.

Business and first class seats are still comfortable, at least for now. I earn miles by every trick in the book (applying for credit cards with intro bonuses, shopping on the airlines' malls, etc.) and only use the points/miles to upgrade the cheapest fare I can find (for now, of the remaining majors American Airlines is the best at letting you upgrade from cheap fares with minimal co-pays).

5. And, of course, there's driving or staying home.

A lot of people seem to be driving longer distances to avoid flying. Or taking the bus. Long distance bus seats are still fairly comfortable compared to airline seats.

What are your strategies to cope with these new seats? Have you flown them? Do you find them as uncomfortable as I do? Let me know in the comments please.

The Power of Social Media to Fix Air Travel Problems

Whatever Happened to Those Folks Who Checked Bag Tags?

Above image via United