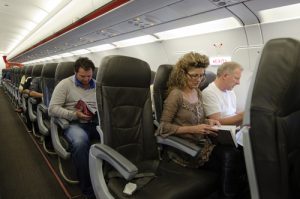 We’ve all experienced it when flying. You sit in the tin can for three, four, maybe even 12 hours, and you completely ignore the people sitting next to you. As in, not a word. No eye contact. Not even when climbing over your neighbors in the middle and aisle seats when you get up from your window seat to use the lavatory.

Maybe that’s why Virgin America offers seat-to-seat chat via the inflight entertainment system, though not many people use it.

Look, I get it. We’re all paranoid about encountering a motor mouth. It happened to me once. I was on a flight from Boston to San Francisco, and the woman wouldn’t stop talking. She told me her life story, literally. And then – true story! – a few days later, I found myself standing behind her at an ATM, and I said hello and she had no idea who I was.

So much for human interaction.

But still, are we taking the “ignore your neighbor” credo a bit too far?

Now don’t get me wrong: I don’t actually want to have a conversation with you. A friendly nod will do. A “pardon me” when you signal that you’d like to get into or out of the row. Even a gentle tap if I’m sleeping. Anything but the silent treatment.

One of the weirdest things about air travel is pretending that the people in your aisle are invisible. Maybe it’s just me, but I find it truly odd sitting next to someone for four, five, six or 12 hours, pretending they’re not there.

There’s a difference between being a chatty Cathy and simply saying “hello,” or at least offering a wan smile when sitting down at the start of a flight, or an “excuse me” when getting up from the window or middle seat.

Instead, this is what usually happens: The plane is boarding and I’m already in the aisle seat, reading a newspaper. Someone stands next to me and does one of the following:

1. Throws something on the middle or window seat and points. No eye contact. No words. Just points. Or maybe grunts.

2. Just stands there waiting for you to get up. Again, no eye contact, no words.

3. Just climbs over you.

And then he or she sits down without saying a word for the entire flight. I see this all the time, and it bothers me.

But sometimes it goes too far. I was flying with a colleague from London to Mumbai on British Airways recently. He was in an economy class window seat in a two-by-two seating configuration. The person in the aisle seat repeatedly refused to get up or otherwise accommodate him when he had to get up. The aisle seat guy just made him climb over him. They didn’t exchange a single word on the 11-hour flight. Weird.

Another time, I was sitting in a window seat in business class on a short flight from Paris to London, again on British Airways, and I had to get up. I politely said “Excuse me” to the passenger in the aisle seat, and I tried to make eye contact. He grunted and rolled his eyes. I lost it and said, “Don’t give me that attitude. I need to use the washroom!”

I mean, really. Was I out of line?

I’m not a chatty sort when I fly. I wear noise-cancelling headphones for most of the flight (more to block out wind and engine noise than to send a signal to my seatmates). But I’m always willing to engage in at least limited conversation. And I know how to shut it down if it gets out of hand, which, frankly, has happened only that one time. (Another time I had a nice chat with Reebok’s vice president of marketing, and he sent me a pair of hiking boots, which I still own, so there are advantages to holding a civil conversation.)

When I’m in the window seat and need to get up or sit down, I make eye contact with the people I have to get past, or at least I turn my head and offer a hello, or an “excuse me I’m in the window seat.” At least I say something – even if it’s just a cheery “sorry!” I’m also a pretty interesting person, if it comes to that.

After all, I’ve been a travel writer for 30 years, been all around the world, worked in marketing, the airline industry, advertising, taught high school and started several companies. I have some interesting experiences that I’m willing to share. So next time you’re seated next to me, at least say hi, and don’t cringe if I do the same. Don’t pretend I’m not there, and I’ll do the same. At least be polite.

I promise I won’t talk your ear off.