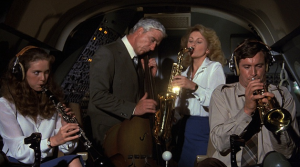 10 terrible airline pilots we hope we never fly with

With all the job pressures and uncertainty in the airline industry, it’s a wonder more pilots don’t run afoul of the law the way Klobjorn Jarle Kristiansen did last week. The 48-year-old American Eagle pilot showed up to work drunk, was suspended and faces both prosecution and the loss of his job. While a commercial plane has never crashed due to drunk flying, there are plenty of instances where pilots have misbehaved throughout history – some of them almost hilariously. Here, a look back at some very memorable misfeasance.

“We’re not going to Vegas,” announced Clayton Osbon, before launching into a rambling sermon, telling his co-pilot that “things don’t matter,” and that “we need to take a leap of faith.” Problem: JetBlue Flight 191 was in fact headed for Vegas – with Osborn as the captain. The worried co-pilot called out into the cabin for help; passengers eventually were able to restrain the increasingly out-of-control pilot and the plane made a safe, emergency landing in Amarillo, Texas. Turns out, the pilot --  later found not guilty by reason of insanity – was right after all.

2. The IndiGo Airlines pilot who wasn’t really a pilot

Just because they’re wearing the uniform, doesn’t mean they can fly the plane. Crew members on a Goa-Delhi flight might have been tipped off to Captain Parminder Kaur Gulati’s lack of credentials after a hugely bumpy landing at Goa Airport back in 2011. Turns out, that was just beginners luck. On the return, Gulati’s dangerous dearth of know-how was outed rather spectacularly when the fraudulent flyer touched down at Delhi, nose first – a major, Landing Of Planes 101-type error that could have gotten everyone killed. It was later discovered that Gulati had forged the necessary documents to receive her pilot’s license.

3. The Southwest pilot who clogged up air traffic control airwaves talking about his bad sex life

First rule of business? If you’re going to trash your co-workers, make sure they can’t hear you. James Fritzen Taylor learned this the hard way back in 2011 after he was suspended without pay for a hate-filled rant over the airwaves about his general lack of satisfaction with the physical appearance of the flight crews he’d been working with the past few weeks. Unfortunately, the audio went out over the air traffic control frequency – and to every other plane in the Houston area, which is particularly unfortunate, considering a) that air traffic control needs the airwaves to give out potentially lifesaving instruction to pilots, including Taylor and b) that Taylor had just called Houston flight crews the “ugliest.” He later issued a canned apology to his poor colleagues, who wasted no time leaking the document – and Taylor’s name and personal information – to the media.

4. The Lion Air pilots with a meth problem

Indonesia’s largest domestic airline has issues. Over the past year, a handful of crew members, including 44-year-old captain Syaiful Salam, have been arrested after random employee drug tests came back positive for methamphetamines – in Salam’s instance, just hours before he was scheduled to fly. Known as “shabu,” crystal meth has become increasingly popular in Indonesia; the airline was sanctioned by the country’s Transportation Ministry after the embarrassing episode.

5. The America West pilots who showed up for work drunk

Back in 2002, Thomas Cloyd and Christopher Hughes narrowly avoided becoming even more infamous after being ordered by authorities to turn the plane around and come back to the terminal at Miami International Airport. Turns out, the terrible twosome had spent the entire night drinking at a Coconut Grove bar, showing up late to their flight; their irregular behavior tipped off staff, who summoned the police. They were later tried and sent to prison.

6. The Northwest pilots who overshot Minneapolis by 150 miles

Missing your turn isn’t a huge deal when you’re driving, but when you’re driving a plane full of people, Timothy Cheney and Richard Cole found out the hard way that the consequences can be rather harsh. En-route from San Diego to the Twin Cities, the veteran pilot and co-pilot at one point got so engrossed with what they were doing in the cockpit – messing around on their laptops, it turns out – that they not only overshot their destination by 150 miles, they forgot to stay in touch with air traffic control. Predictably, panic ensued.

7. The cargo pilot who got drunk and crashed a plane in Alaska

So far – fingers crossed – pilot drunkenness has never resulted in the crashing of a commercial airliner, but that’s cold comfort to the dozens of cattle and four crew members who died at the hands of an intoxicated Japan Air cargo pilot back in 1977, shortly after takeoff from Anchorage, Alaska. It was a quick flight – after getting up to just 160 feet above the ground, the DC-8 stalled and sank to the ground.

8. The Jetstar pilot who was too busy texting to lower the landing gear

You know how you forget to turn your phone off when the plane lands, and as you head toward the ground, your service comes back and your phone starts blowing up with texts from all your pals? It happens to pilots, too – right when they’re supposed to be landing the plane. The co-pilot of this Australian budget flyer watched in disbelief as his colleague chose one of the most dangerous times in flight to start playing with his phone. A near-miss with the ground – sans landing gear – jolted the pilot back to reality; the plane eventually touched down safely.

9. The Air Canada pilot who cracked up

Of all the times…the co-pilot of a London-bound Boeing 767 had to be restrained and removed from the cockpit after suffering a mental breakdown midflight back in 2008. “His voice was clear, he didn’t sound like he was drunk or anything, but he was swearing and asking for God. He specifically said he wants to talk to God.” After moving him away from the controls, the pilot was able to make a speedy and safe emergency landing in Ireland.

10. The Air India pilots who started a brawl

Passengers on a Delhi-bound flight from the United Arab Emirates back in 2009 were treated to a spectacular bit of inflight entertainment when the two pilots began fighting with two crew members over an allegation of sexual harassment from a female flight attendant. The confrontation escalated considerably, moving out of the cockpit and into the cabin for an all-out melee, during which time the controls were decidedly unmanned. Oops.