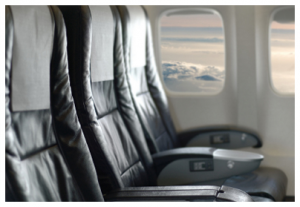 A modest proposal for dealing with airline passengers "of size"

Now that the federally-mandated three-hour tarmac delay rule is in place along with other Department of Transportation consumer rules and haven't brought down the airline industry, maybe Secretary of Transportation Ray LaHood needs to have his D.O.T. address a far more common aviation crisis: the growing number of people who are too large to fit into tiny airplane seats and the discomfort they cause their seat mates.

Without a doubt, Marsha St. Clair, a Los Angeles-based retiree, would agree. St. Clair flew recently with her husband and sat next to a woman who was so obese that she "spilled over" into a third of St. Clair's middle seat on a 757, forcing her to remain in full body contact for the duration of the five-hour flight. "I paid for an entire seat, but only got less than two thirds of it," she says. "Please tell me that there is a regulation regarding this situation."

Well, Marsha, there isn't. But there should be.

Although some airlines have rules addressing such situations, including Southwest, which requires "passengers of size" to purchase a second seat, there's no standardized regulation.

Although some airlines, including United state in their carriages of contract, under the "refusal to carry" clause, that they can refuse to fly a passenger who cannot "fit into a single seat," most airlines are vague about such rules. And even those airlines that do have clearly stated regulations honor them more in the breach than the practice.

But with figures from the National Center for Health Statistics stating that more than one-third of adults are obese, and that another third are merely "overweight," something needs to be done.

Now I realize that some people will say that obesity is a genetic condition or a handicap, and it may well be, although the fact that the ranks of the obese in the U.S. grow year after year suggests that it's not (DNA doesn't mutate quite that quickly).

But let's for the sake of argument say that obesity is a handicap, something beyond the individual's control.

In that case, it should be treated just like any other physical challenge. What can be done? Well, one solution would be for the D.O.T. and other nations' transportation authorities to mandate that all airlines install extra wide "obesity" seats in their economy class sections. Each plane could have, say, one or two rows with two by two seating instead of the usual three by three configuration. Obese passengers could be pre-assigned these seats, either for the usual economy fare, or perhaps by paying a small premium. These seats wouldn't enjoy any other special services or extra legroom, just extra width.

After all, JetBlue, United and other others sell extra legroom seats for a premium—often as little as $20 each way for a short flight. Why not install and sell "extra width" seats and sell these for a premium as well?

If no obese passengers are flying on a particular flight, normally sized passengers could upgrade at the last minute to these more comfortable seats, by paying a premium, or get them by luck of the draw if there are no takers. Although those extra legroom rows are great, I'll bet what a lot of passengers really want is more room for their posteriors.

Barring that solution, or in addition to it, the D.O.T. should require all airlines to publish clear policies stating how they will protect squished and uncomfortable passengers such as St. Clair, who find themselves getting less than what they paid for. It's only fair.

Travelers, how do you think airlines and regulators should account for obese passengers? Leave your comment below, and please keep it civil.

8 Airports You Can Walk To