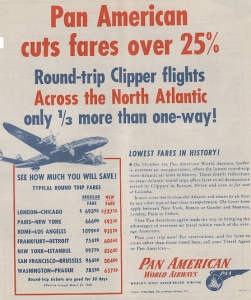 Time to rethink what a "cheap" airfare is?

Consumers have been conditioned to wait for rock bottom sales. It might be time to manage expectations.

It had to happen sometime. It's just ironic that it happened on the cusp of another recession.

For years, airlines lost money. Big money. Between 2000 and 2005 alone, for example, the industry lost $40 billion, and four of the so-called "legacy" carriers (US Airways, United, Delta and Northwest) filed for Chapter 11. Rumors are swirling that American could be next.

Meanwhile, airfares continued their lurch to the bottom. In the early 1960's, TWA charged a little over $200 (well over $1000 in today's dollars) to fly roundtrip from New York to Los Angeles. And although the cost of fuel and jet planes and wages did go up with inflation in the ensuing decades, you could still sometimes nab a transcontinental fare for $200. Could, not can.

The era of airlines selling their product for less than it costs to deliver looks like it's over.

When Virgin America and JetBlue, two relative "low cost" newcomers, had a sale recently, the "sale" price was $159 each way on a coast-to-coast flight, such as New York to Los Angeles. And that was only for travel on a Tuesday, Wednesday or Saturday. Southwest Airlines used to start its sales at $29 each way for short hops topping out at $99 or even $89 for long haul flights; now sale fares more often range from $49 to $139.

Why the change? Simple economics. For a while, cost cutting helped the airlines reduce the bleeding. The four bankrupt U.S. carriers were able to downsize. They embraced automation and reduced headcount.  They parked outdated planes in the Mohave. This helped, but not enough. Fuel costs soared. And consumers, who had been trained to wait for those $29-$99 fares, held out for sales. After all, most travel is discretionary. Sure, if you're racing to the bedside of a dying parent, expecting your first grandchild, or trying to tame a nuclear power plant, you don't count the cost. But you don't have to take a vacation. You can videoconference. You can drive or stay home. So airlines remained on shaky financial ground.

The solution?  They merged: US Airways swallowed up America West; Southwest absorbed ATA; then Delta joined forces with Northwest, followed by a marriage of Frontier and Midwest. Next up, United bought Continental, and in the biggest surprise of all, Southwest took over Airtran, leaving US Airways and American the only two major legacy airlines without a dance partner. The demise of SkyBus, Independence Air, Aloha, Mexicana and other recession victims put further upward pressure on fares.

Not only did the remaining airlines merge, but they eliminated routes and cut capacity, which is still ongoing, giving them their long sought after Holy Grail of pricing power.

And while all this was going on, the Great Recession prevented funding for any new start-up low cost airlines to take the pressure off. (In past years, there was always a JetBlue or a SkyBus that popped up to drive fares down.) The result: higher airfares. Depending on which statistics you follow, this year they'll be up by about 10-13 percent compared to last year.

We may see even more airline consolidation in the coming years (will Alaska, Frontier, US Air and American be next?), which will only lead to higher fares. We may even see combinations of US-based and foreign carriers, if restrictive ownership laws can be changed. But what may not change, at least not quite yet, are consumer expectations. They've been conditioned to wait for those $29 and $39 and $99 airfares. But like the jobs in Bruce Springsteen's ballad "My Hometown," they're "going boys and they ain't coming back."