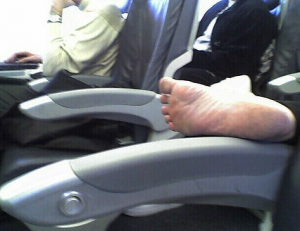 Every airline has different rules published in their contracts of carriage stating under what conditions they might refuse to fly you. As noted earlier, United has a rule governing the transport of passengers who don't fit in a single seat or are so large that they can't lower an arm rest between them and fellow passengers.

Delta has a slightly different set of rules. You can be removed or refused transportation if you can't buckle your seat belt. As with United's contract, no shoes, no service and if you're stinky, it's no go. But in addition, there's a rule about passenger conduct, and it's somewhat vague (no word if it includes two women kissing). Here are the 13 reasons you might not be able to fly on Delta, from Delta's contract: