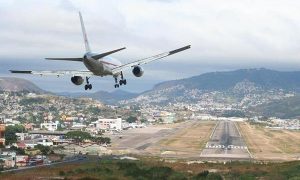 Are you an adrenaline seeker looking for your next hair-raising, spine-tingling adventure? If so, look no further. With the help of an anonymous commercial pilot, dubbed Pilot Anonymous, Airfarewatchdog has put together a list of the world's most thrilling airports. So buckle your seatbelt, pass on the $7 snackbox, and get ready for a wild ride!

Thousands of feet above sea level, Toncontín International Airport boasts a short (6,132-foot) runway. Due to the surrounding mountains, the approach resembles a zigzag. Pilot Anonymous explains, "With the advent of GPS, the approach into Tegucigalpa is no longer straight. We weave between the mountains as we land." To line up with the runway, planes must make a last-second 45-degree turn. Talk about sweaty palms!

Queenstown is considered the adventure capital of the world, so it's no surprise that its airport delivers pure excitement. It lies below The Remarkables, a jagged mountain range seen in The Lord of the Rings. On descent, passengers may feel a sudden drop in altitude caused by strong downdrafts. Bird activity by the runway, as well as frequent bad weather and visibility, also make Queenstown Airport a real knee-knocker.

"Small airports, short runways, and terrain are the three whammies of flying," says Pilot Anonymous. Gustaf III Airport has all three. Its 2,100-foot runway begins at the base of a hilltop traffic circle, making for an abrupt and steep descent. At its end lies St. Jean Beach and its clear blue ocean. Though signs advise sunbathers not to get too close to where the runway meets the sand, it's still a popular spot to soak up the rays.

Princess Juliana International Airport is one of the busiest airports in the Caribbean. Steps from Maho Beach, it only gives pilots a little more than 7,000 feet of running room to land, causing the approach to be exceptionally low. Planes fly mere feet over sunbathers, and passengers feel as though they could reach out and shake their hands. Next time you pass through, be sure to wave.

If you've seen The Proposal, you’ve seen Sitka Rocky Gutierrez Airport. Located on the small island of Japonski, its lone runway is almost completely surrounded by water. Unpredictable weather is a constant concern. Pilots must take heed of boulders and other debris that can wash onto the runway during storms, as well as gusty winds.

Tucked away in the French Alps, Courchevel's airport is one of the most dangerous in the world. Seen in Tomorrow Never Dies, its runway is a short 1,722 feet and has a steep incline (which slows planes down on landing and speeds them up on takeoff). As if that isn't enough to make your heart race, the airport sits at an altitude of 6,588 feet. "Here," says our source, "engines don’t produce the same amount of power, and with the air being thinner, there’s less lift for the same airspeed over the wings." Consider yourself warned.

Catalina Airport isn’t for the faint-hearted. Nicknamed "Airport in the Sky" because of its lofty elevation and sheer cliffs, it's known for downdrafts and turbulence on approach. Its sole runway is raised in the middle, so much so that pilots can't see where it ends. Heavy rains can cause it to become littered with pieces of asphalt, potholes, and soft spots, all things you don't want to encounter.

New York's LaGuardia Airport is busy and short on space. It's bordered by Bowery and Flushing bays, and pilots must contend with crowded skies thanks to nearby JFK and Newark airports. Mere miles from Manhattan, approaching planes appear to skim the skyline. Right before landing, pilots make a number of white-knuckle turns, one of which is 180-degrees around Citi Field.

Nestled 9,000 feet high in the snowcapped Himalayas, Tenzing-Hillary Airport is the gateway to Mount Everest. Its short (1,500-foot) runway slopes up the side of a mountain. Used by locals as a way to get from one side of town to the other, a siren warns of approaching planes. Pilots have one shot to land, as the surrounding terrain rules out a go-around. Perhaps even more gripping is takeoff. Once planes begin speeding downhill, stopping isn't an option. If they aren't airborne before the cliff at the end of the runway, they descend into the void below, leaving those onboard to pray there's enough power to eventually lift off.

Barra's airport is the only one in the world where scheduled flights land on a beach. When the windsock is flying, locals are advised to keep their distance from its three runways, which are marked by wooden poles. High tides cover them, so flights must be scheduled accordingly. For bonus chills and thrills, fly in at dusk, when just a few vehicles are used to illuminate the runway.

Sign up for Airfarewatchdog alerts and be the first to know when the fare drops.

Want to see pictures of these airport thrillers? The full story is here.