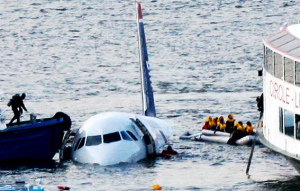 5 hero pilots for the ages

You've probably read that the "Miracle on the Hudson" plane flown by Captain Chesley Sullenberger is finding a new home in Charlotte at the Carolina Aviation Museum. But Sully's feat in saving the lives of all onboard isn't the only hero pilot story in aviation history.

You also  know that flying is still the safest way to get from A to B – it's just that when things go wrong in midair, they go very, very wrong. Or do they? Not every major malfunction results in mass fatalities; here are six amazing instances where pilots were able to avoid loss of life in the face of major adversity.

JUST FEEL YOUR WAY AROUND Airbus, Boeing, Tupolev. Which one of these is not like the others? For decades, none of them. Tupolev, a Russian aerospace and defense company, was long the wind beneath the wings of the Soviet Union and its pals, supplying passenger jets to everyone from the Chinese to the Cubans. Times change; fast forward to the present and you have an Aeroflot that prefers the company of Airbus and Boeing, leaving Tupolev's stock to competitors such as domestic flyer Alrosa Mirny Air. On a simple run from the diamond mining town of Udachny back to Moscow's Domodedovo Airport, pilots Andrei Lomanov and Evgeny Novoselov sat shocked, watching as the plane's electrical supply suffered a total meltdown, leaving them at 10,000 feet with no navigation equipment in a low visibility situation. With no other way to land than by sight, the pilots brought the plane down as close as possible to the ground, eventually locating the shuttered Izhma Airport, where they successfully landed on the too-short runway, before skidding into the forest. The plane was totaled; all 72 passengers and 9 crew members escaped unharmed. President DImitry Medvedev called the pilots national heroes.

HARD LANDING What do you call an airplane without engines? Er, a hang glider? We would also have accepted as the correct answer "Cathay Pacific Airways Flight 780," on April 13, 2010. On that day, a perfectly boring flight from the city of Surabaya, Indonesia to Hong Kong turned into a thrill ride from hell after both engines on the Airbus A330-300 went kaput. This left the pilots high and dry on their approach into Hong Kong's bustling airport, where air traffic control was able to clear a path for the bat-out-of-hell plane, which touched the ground at a speed of more than 250 mph, more than 100 miles per hour faster than the plane should have been able to manage. And it barely did; the landing gear basically blew up as the aircraft came down. There were multiple injuries, but all 322 people on board survived. Investigators later discovered that bad practices at the airport in Surabaya had caused fuel contamination, resulting in engine problems. 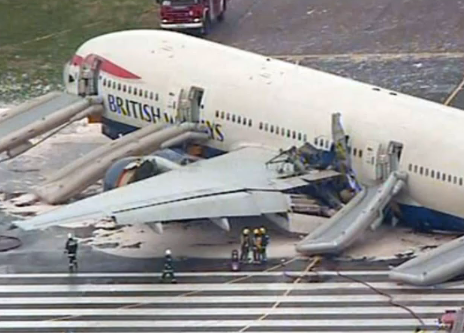 SHORT STOP It was a frosty January day in 2008 at London's Heathrow Airport, and British Airways Flight 38 from Beijing's Capital International Airport was just one of many coming in for a landing, gliding over the bustling Hatton's Cross intersection toward its assigned runway. Three seconds before touching down, the control tower received alarming news – the pilots of Flight 38 were declaring an emergency. Having narrowly missed crashing into the middle of the A30 highway, the Boeing 777 bellyflopped into an open field, skidding to a stop at the foot of the runway. The plane was totaled – miraculously, everyone on board was pretty much fine. In fact, passengers later reported, they had no idea as to the serious danger they were in – one told London's Daily Telegraph that while the landing was rough, he'd experienced his share of touchy landings; this one was "so unsurprising that it was insufficient to stop me working on my Sudoku puzzle." Now that's what you call great service.

SHOOT OUT! The act of getting a plane up into the air carries with it a certain number of risks; imagine trying to take off in the middle of a war zone. In November of 2003, the three-man crew of a DHL cargo plane faced the ultimate test. Seconds after liftoff from Baghdad International Airport, their Airbus A300 was struck on its left wing by a surface-to-air missile, fired by militants loyal to Saddam Hussein. The strike destroyed an engine and disabled the plane's hydraulics, forcing the crew to resort to risky experimental maneuvers to get the craft back to the ground, which they managed successfully just ten minutes later. Without hundreds of passengers on board, the pilots never received much notoriety.

AND OF COURSE THERE'S FLIGHT 1549  Perhaps no near-miss in modern history is quite as celebrated as the one involving US Airways Flight 1549. The Airbus 320 lifted off from New York's LaGuardia Airport on a chilly winter morning in 2009, only to tangle with a flock of geese as the plane ascended above The Bronx. The result: Loss of both engines so quickly and completely, the crew had no choice but to make an emergency landing in the first available spot. Barely clearing the George Washington Bridge, the plane touched down successfully in the Hudson River. All 155 people on board escaped with their lives, in part due to the location of the crash just off Manhattan's west side, mere meters from a busy commuter ferry stop. Widely regarded as one of the most successful water landings in history, the pilot, Chesley Sullenberger, achieved instant celebrity.