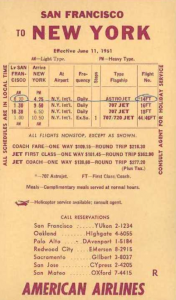 And that doesn't even include all the other fees: meals, in flight entertainment, priority seating, priority boarding, and so on.

And yet: Despite the added fees (not to mention higher fares) the five “legacy” carriers (American, Delta, United, Continental, US Airways) lost billions in the first quarter of 2011. And that was with fuel prices lower than their peak of a couple of years ago.

Some thoughts. And feel free to disagree, it's a free country:

Without the added fees and charges, the airlines would have lost even more, and it's likely that we would have either seen more consolidation and mergers, more capacity cuts, and at least one carrier go belly up or file for bankruptcy protection—which definitely would have led to even higher fares and fees.

It's not for lack of trying

Bottom line: the airlines have cut costs dramatically, reduced capacity, merged, added fees, raised fares, and still they are delivering their product for less that it costs them to do so.

Part of this is the airlines' own fault, perhaps. They have taught consumers to wait for sales. Most travel is discretionary. When airlines raise fares too high, consumers drive, stay home, or wait for a sale. Airlines used to print fares on their schedules if you can believe that...and fares seldom changed.  Only "expectant grandmothers" and mission-critical business travelers will fly at the drop of a hat for any fare they can get.

The only time in airline industry history that the airlines were consistently profitable was when they were regulated by the government, which told them where to fly and how much to charge. Deregulation was in part to blame for scores of airline Chapter 9 and Chapter 11 filings. Remember TWA, Pan Am, Eastern, PeoplExpress, SkyBus, Independence Air, National, Aloha, Midway, ATA, and the rest?

Airline tickets cost way less than they used to. As the American Airlines schedule shown above shows, in 1961 AA charged $218 round-trip to fly between New York and San Francisco, about what it costs today when there's a sale. And that included a steak dinner and pilots wings for the kiddies. But that was in 1961, when you could buy a new car for under $1000.

There is still overcapacity in the worldwide airline industry. Airlines will not be profitable until there are fewer seats, and until most of those seats are chasing the "must-fly" passenger (for example, someone relocating overseas—you cannot drive from New York to Paris).

Some industry observers believe that the only solution is world-wide consolidation. You know those airline alliances—OneWorld, SkyTeam, and Star Alliance? Imagine if they were airlines—the only three airlines. Then you'd see the airlines get pricing power. And perhaps we'd see better service.

Good question. Southwest doesn't charge for the first or second checked bag, within weight limits; and doesn't charge a ticket change fee. And yet it's consistently profitable. But there's a downside. Southwest doesn't play by the same rules. It doesn't allow its fares to be compared side by side on online travel agency sites; it doesn't "interline" with other airlines; it doesn't fly internationally; doesn't assign seats; hasn't joined an airline alliance (e.g., OneWorld); and has a limited route network. Should other airlines follow Southwest's business model?

And speaking of service, unfortunately, a lot of consumers hate flying at any price. The airlines are reviled for uncomfortable seats, poor service, grumpy staff, delays, unfair business practices and more. An industry that is losing money cannot afford to deliver a quality product.

The economy has also made it difficult for the airlines to raise fares to a profitable level. When consumers are spending $80 to fill their tanks each week, that’s money they can't spend on airline tickets. But it looks like the economy won't spring back to life anytime soon.

Some people argue that the problem is with airline management. They're a bunch of overpaid incompetents. But airlines have cut costs everywhere they can—distribution (selling tickets on their own websites), more efficient planes, mergers, bankruptcy filings to eliminate expensive contracts and pensions, you name it. But nothing has worked, so far.

New U.S. D.O.T. regulations, while for the most part welcome and necessary, are adding to airlines' costs.

So what’s the solution? Is there a solution?

The airlines could cut costs even further but that would impact service further, and more people would find another way to spend their travel dollars resulting in a vicous circle. As I see it, the only way for the airline industry to regain its health is either to re-regulate, which will probably never happen, or a combination of massive capacity cuts and global mega-mergers. Airlines should rethink their tendency to have panic sales when traffic slows down, and retrain consumers to pay what it actually costs to fly, plus a small profit margin. Otherwise, the global airline industry will continue to be a race to the bottom.

So perhaps we should learn to live with fees--paying for what we use when we fly—or suffer the consequences of ending up with a handful of world-wide airlines. Yes, fees should be spelled out more clearly at the time of ticket purchase if not before. The cruise lines industry thrives on a la carte pricing; so do restaurants, hotels, and rental car companies.

If you have a better solution to an airline industry in crisis, I'd love to hear your thoughts.

The opinions expressed above are the author’s own and do not reflect the opinions of any other entity.